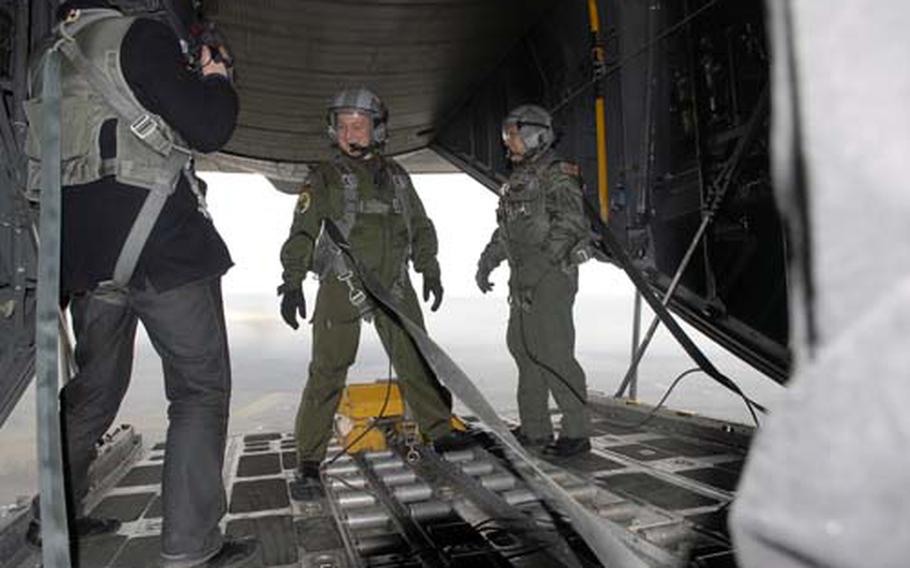 Tech. Sgt. Marty Landry, a loadmaster with the 37th Airlift Squadron at Ramstein Air Base, Germany, stands with a U.S.-trained Polish Air Force loadmaster on the open ramp of a C-130 during a low-level demonstration flight last week over Poland. The United States is planning to give Poland five C-130 aircraft later this year to help its central European ally enhance its airlift capabilities. (Jennifer H. Svan / S&S)

Tech. Sgt. Marty Landry, a loadmaster with the 37th Airlift Squadron at Ramstein Air Base, Germany, stands with a U.S.-trained Polish Air Force loadmaster on the open ramp of a C-130 during a low-level demonstration flight last week over Poland. The United States is planning to give Poland five C-130 aircraft later this year to help its central European ally enhance its airlift capabilities. (Jennifer H. Svan / S&S) Kids with the “My House-My Future” children’s home in Slupsk, Poland, receive stuffed animals and clothes from U.S. Ambassador to Poland, Victor Ashe, last week in Warsaw, Poland. The items were donated by the Kaiserslautern military community and delivered by the 86th Airlift Wing at Ramstein Air Base, Germany. (Jennifer H. Svan / S&S) 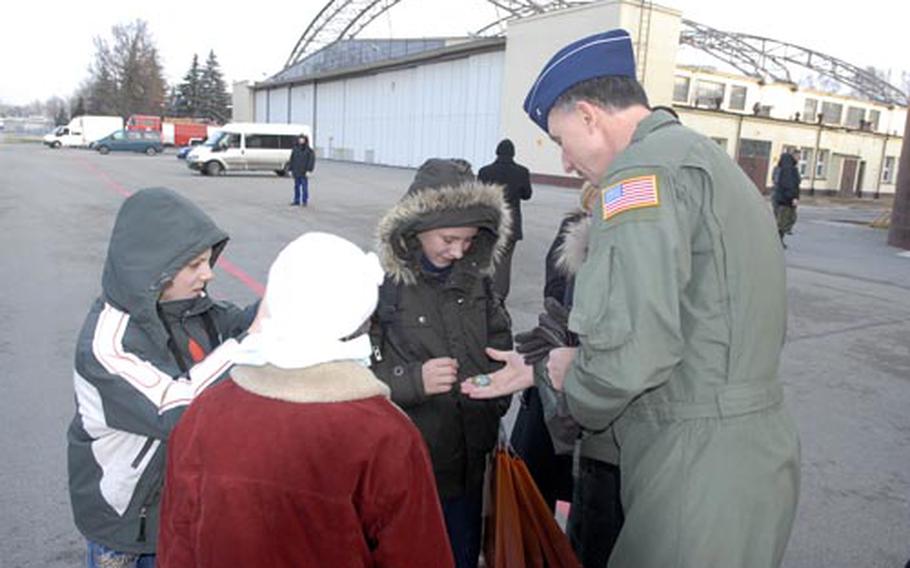 WARSAW, Poland &#8212; The three kids and their chaperones rose at 1 a.m. for the seven-hour drive from Slupsk to Warsaw.

Unbeknownst to them, the youngsters for a few shining moments would be the public face of the growing alliance between two countries and two militaries.

Waiting for the children at Warsaw&#8217;s Frederic Chopin Airport were reporters and about 30 airmen from the 86th Airlift Wing and U.S. Air Forces in Europe headquarters at Ramstein Air Base, Germany. The airmen visited Poland last week to deliver one gift and demonstrate the capabilities of a second.

The former consisted of toys, books and clothes to the children. The latter was a fleet of aging aircraft with new upgrades promised by a former U.S. president.

The U.S. is preparing to give five C-130 Hercules planes to one of its staunchest central European allies, fulfilling a 2004 pledge former President George W. Bush made to then-Polish President Aleksander Kwasniewski.

Brig. Gen. Tadeusz Mikutel, commander of Poland&#8217;s 33rd Air Base in Powidz, said the Hercules will be the largest plane in its modest military aircraft inventory and likely will be used in part to transport Polish troops to Afghanistan, where the country currently has more than 3,000 troops.

The age of the 1970 aircraft is not important, Mikutel said.

"The U.S. Air Force is trying to provide us with a plane that is serviceable," he said, during an interview at Powidz Air Base. "We are trying to receive the product which will serve us for the next 20 to 30 years."

Indeed, the U.S. is sinking $98 million into the program, a price tag that includes major structural upgrades to extend the aircraft&#8217;s life and modifications in avionics, navigation and radar equipment. Polish air force crews and maintainers also received training in the States on how to fly and maintain the planes.

Assisting Poland with military hardware and training comes as the former Soviet-bloc country this year marks its 10th year in NATO, and signifies ongoing efforts to enhance relations between the two air forces, according to U.S. Air Force officials.

"They are going through transformation in their economy, in their country and in their military," said Air Force Lt. Col. Scott Wallace, chief of Air Force Affairs at the U.S. Embassy&#8217;s Office of Defense Cooperation in Warsaw. "As good partners, we have the capability to help them jump ahead."

The 86th Airlift Wing visit was an opportunity to showcase the versatility of the C-130 to the Polish military and local media ahead of the aircraft&#8217;s handover, which is planned for later this spring, Air Force officials said. Two C-130Es &#8212; the same model being given to Poland &#8212; made the two-plus-hour flight from Ramstein to Warsaw.

On a clear morning last week, with temperatures below freezing, the kids from Slupsk stared wide-eyed as two pallets of 3,200 pounds of toys, books and clothes were unloaded from the tail of one of the planes. The donations came from the Kaiserslautern military community, through an effort spearheaded by Ramstein&#8217;s 5/6 association.

It was a gesture of goodwill with political undertones. Klaudiusz Dyjas, director of a children&#8217;s home in Slupsk, said the items would go to needy children in Slupsk and neighboring communities near the Baltic Sea, which happens to be in the same area were the United States wants to build a missile-defense system.

"I can assure you when the aircraft get here, you&#8217;ll be very pleased with the modification that has taken place."

The most significant upgrades are new center wing boxes, a structure that sits atop the fuselage and forms the attachment point for both wings and all four engines. Cracks in those boxes resulted in the grounding of some C-130E Hercules in 2005.

"It allows us to go anywhere in the world," he said of its ability to land on short, unimproved runways.

Poland&#8217;s biggest challenge, he believes, will be flying it often enough for air crews to keep their skills proficient and having the resources to fuel and maintain the aircraft.

"Hopefully, all goes well with their immersion with the C-130," he said. "It could be a really good thing. Only time will tell."