Baumholder unveils memorial to its soldiers who died in Iraq 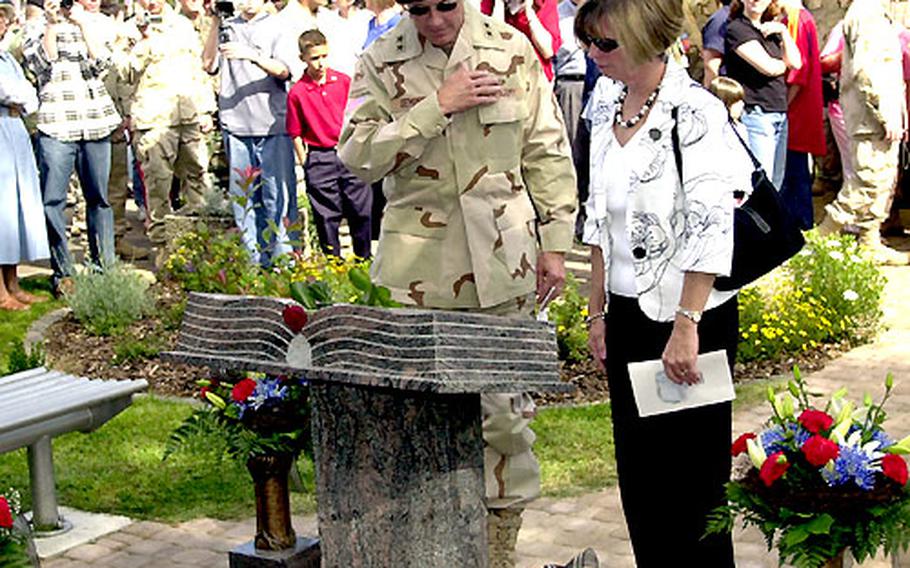 BAUMHOLDER, Germany &#8212; Beyond being a combat arms base and training area, Baumholder is a community.

So when it came down to selecting the words for a monument saluting soldiers from Baumholder who died in Iraq, the choice was a community effort.

On the left-hand page of the 4-foot, book-shaped marble marker at the center of the base is a quote from Gen. Dwight D. Eisenhower: &#8220;History does not long entrust the care of freedom to the weak or the timid.&#8221;

Inscribed on the right-hand page is Baumholder&#8217;s personalized salute to its fallen: &#8220;In remembrance of the soldiers of the Baumholder Military Community who gave their lives so that others may live in a peaceful, secure and free world.&#8221;

&#8220;What I like about [the quote] is that it came from the community,&#8221; said Lt. Col. Todd Buchs, 222nd Base Support Battalion commander during the deployment. It was a collaboration with Brig. Gen. Mike Scaparotti, former assistant division commander and representatives of the 2nd brigade and battalions, as well as the Baumholder Community Spouses Club, which helped fund the memorial. &#8220;We spent a lot of time on the words.&#8221;

Friday&#8217;s celebration &#8212; recognizing the Baumholder-based 2nd Brigade&#8217;s and Division Artillery&#8217;s return &#8212; began at noon with a somber unveiling of the plaque to the Baumholder fallen in front of the BSB headquarters. A crowd of about 400, including former 1st AD commander &#8212; now V Corps commander &#8212; Lt. Gen. Ricardo Sanchez, attended. They listened to speakers, including Maj. Gen. Martin E. Dempsey, current 1st Division commander, and to a reading of the names of the 20 Baumholder-based soldiers who died during 15 months in Iraq.

Baker referred back to the sunny day in March, 2003, when soldiers gathered here for brigade deployment ceremony photo ops with squads, platoons and battle buddies. Senior officers that day &#8220;spoke eloquently, yet directly, to the reality that hung heavily over the event: Not everyone was coming home,&#8221; he said.