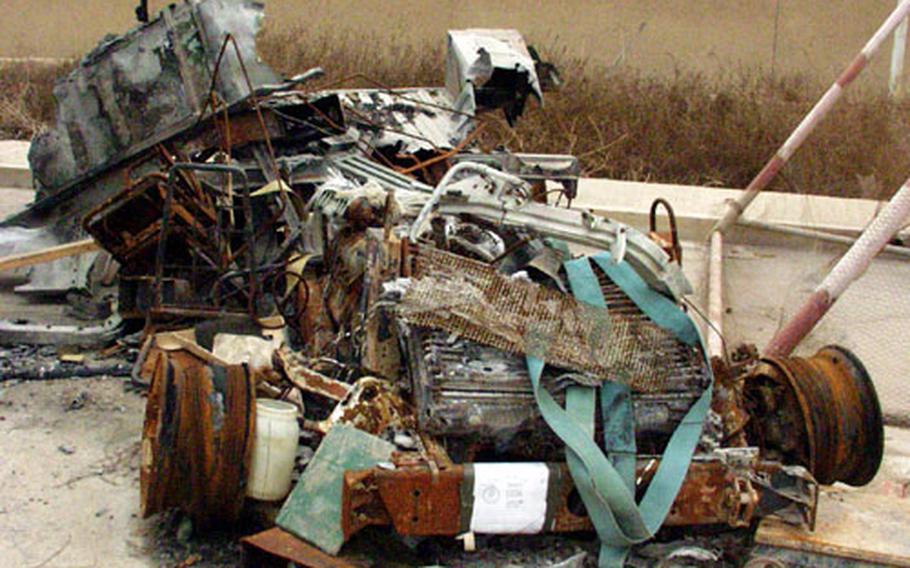 Pfc. Jonathan Mayberry’s Humvee is shown after it burned down to its skeleton following a grenade attack. Mayberry survived that attack and another and was awarded two Purple Hearts. (Ward Sanderson / S&S)

Pfc. Jonathan Mayberry’s Humvee is shown after it burned down to its skeleton following a grenade attack. Mayberry survived that attack and another and was awarded two Purple Hearts. (Ward Sanderson / S&S) 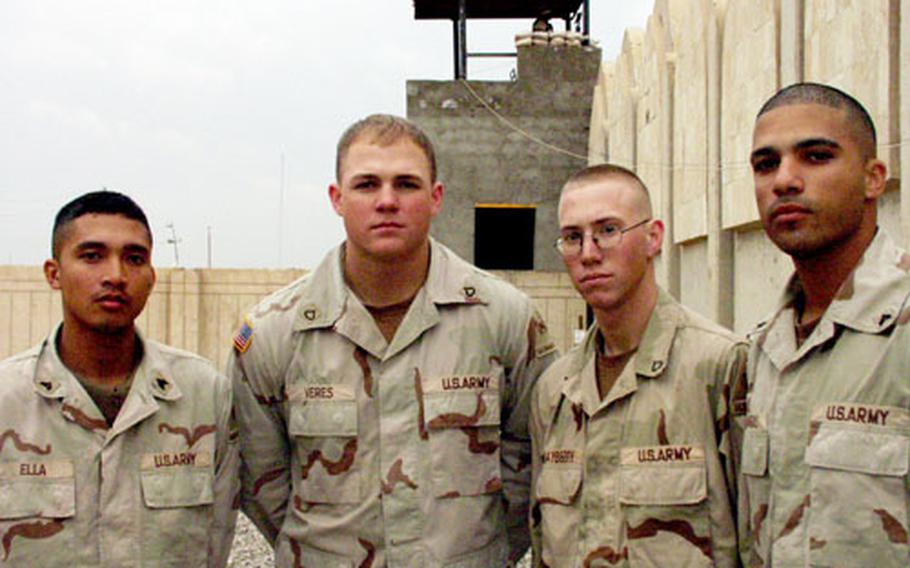 The soldiers of Battery A, 4th Battalion, 27th Field Artillery of the 1st Armored Division patrol one of the hottest areas of Baghdad. Ten of them have been awarded Purple Hearts. The unit’s members include, from left, Sgt. Ross Ella, Pfc. Dusty Veres, Pfc. Jonathan Mayberry and Sgt. Eric Chargois. Mayberry has two after surviving attacks just days apart. (Ward Sanderson / S&S)

BAGHDAD &#8212; In an urban neighborhood where Saddam Hussein tried to erect the world&#8217;s largest mosque, a cadre of American artillery troops learn street smarts dodging grenades and the neon threads of tracer fire.

The soldiers of the 1st Armored Division&#8217;s Battery A, 4th Battalion, 27th Field Artillery, weren&#8217;t trained to kick in doors in search of terrorists. Yet they&#8217;ve had to endure one hot tour in one of Baghdad&#8217;s toughest boroughs.

Al Mansour is so treacherous that the Baumholder, Germany-based unit has pinned Purple Hearts on 10 of its 90-some soldiers. One soldier even has two. Last month, its medic died during a grenade attack and a hard hail of gunfire.

Yes, lucky. Lucky to be alive.

The experience of these troops &#8212; learning to wage war in ways they weren&#8217;t trained, facing frequent grenade attacks, working as part peacekeepers, part beat cops &#8212; epitomizes that of many soldiers serving in dangerous areas here.

And Baghdad remains dangerous. On Wednesday, six mortar rounds injured 34 soldiers and killed one in another part of greater Baghdad. According to military figures, 485 troops serving in Iraq have died during the war and occupation, 333 of those from enemy attacks.

Inside Battery A, hunkered on a site beneath the skeletal beginnings of the unfinished Great Mosque, it&#8217;s easy to find a soldier who has taken shrapnel.

The troops trained at close combat in the Kuwaiti desert in the spring, but the soldiers are still surprised their artillery battery wound up here, patrolling a wasp&#8217;s nest.

In a sense, so was the Dec. 17 firefight that ended in the death of Spc. Christopher J. Holland.

Sgt. Ross Ella was there. The 29-year-old from Los Angeles remembers rolling into a section of town around 8:30 p.m. and noticing all the lights were out. When troops approached the power substation, guards refused to open the door.

Then came the grenades and gunfire. And the electricity came on again.

Holland was struck in the neck. Ella dragged him behind a wall and tried to treat the other wounded, eventually running out of bandages. He twice ran through enemy gunfire for more medical supplies.

A bulletproof vest saved a lieutenant&#8217;s life. A translator who was injured would be released from treatment the next day. Holland, the medic, was dead.

The night of Holland&#8217;s memorial service, troops were again attacked on the same street.

Shrapnel pierced Mayberry an inch from his left eye and behind his ear.

In the same strike, Pfc. Dusty Veres, a 22-year-old from McAllen, Texas, suffered burning shrapnel wounds in both legs.

Mayberry would be attacked less than a week later. His patrol had stopped to pick up an Iraqi who was helping the Americans. An improvised bomb sent shrapnel into the back of Mayberry&#8217;s head.

Both soldiers admit they were wary of returning to the streets.

But when it was time, they just did it. They say there was no macho, psych-up routine, no magic testosterone trick. They had to go out again and so out again they went.

Mayberry was restricted from normal duty for one month after his second attack, but he&#8217;s still in Iraq. Soldiers typically leave a theater after attack injuries, but Mayberry says his unit is too small and sees too much action for that.

He says he&#8217;d be too worried about his fellow soldiers to stay back in Germany while they fought. He says he couldn&#8217;t even stand being on restriction.

After all the unit has been through, privates are no longer taking the point, Chargois says. Instead, sergeants and lieutenants lead through the dark doorways. He says it&#8217;s not because they are brave. They are afraid to be the ones to tell a private&#8217;s wife he isn&#8217;t coming home.

But despite the reminders and resentments &#8212; shrapnel wounds and a job they never expected &#8212; some remain hopeful for Iraq.

He believes Iraq will be a new place in a couple of years. The sergeants say water, power and sewage service are better now. They believe many Iraqis are grateful.