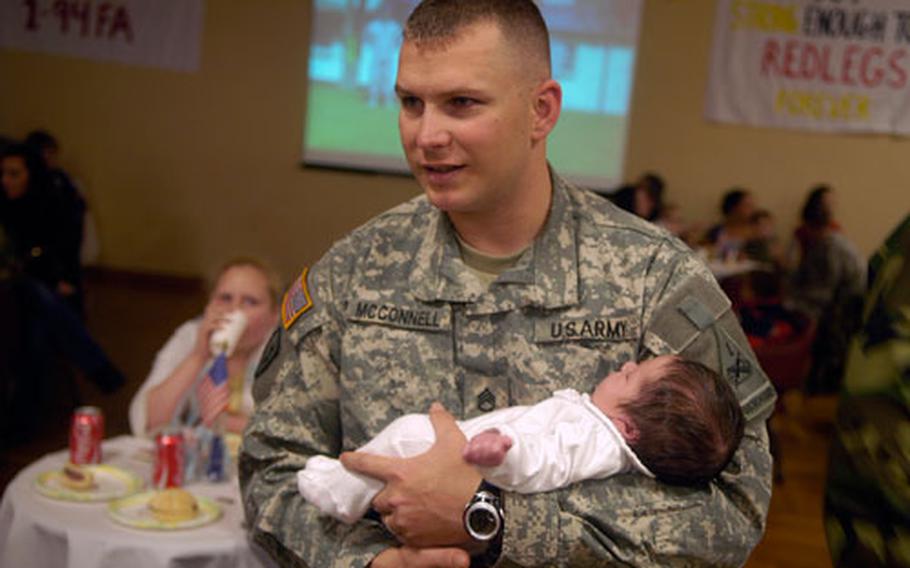 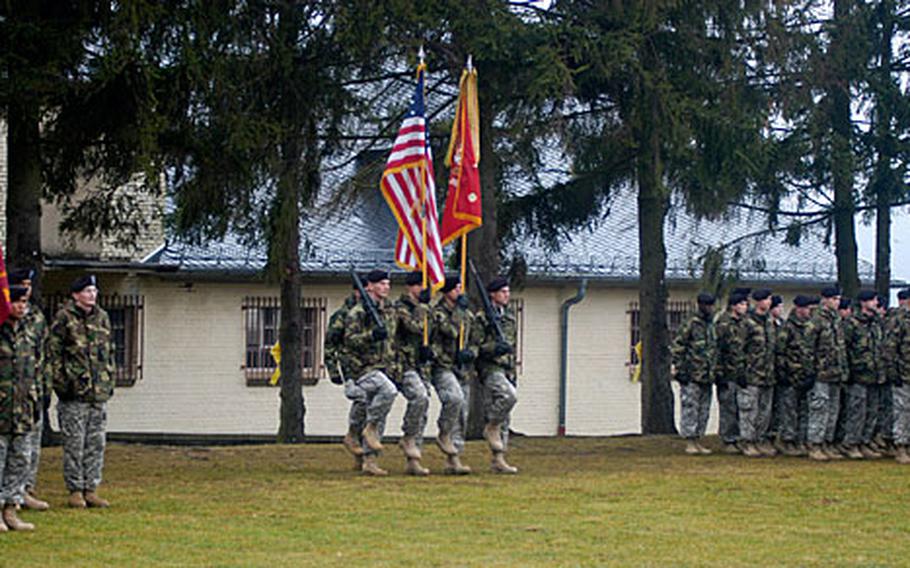 Soldiers from the 1st Battalion, 94th Field Artillery Regiment uncase their colors and march in formation after returning from a deployment in Romania. About 350 soldiers from the unit trained with Romanian and Bulgarian forces as part of Task Force Deep Steel. (John Vandiver / S&S)

It had been two months since Staff Sgt. Salvador Valle saw his newborn son.

The soldiers of the 1st Battalion, 94th Field Artillery Regiment embraced friends and family Thursday after a nearly three-month deployment in Romania. The unit, based out of Idar-Oberstein, sent about 350 soldiers to train with the Romanian and Bulgarian infantrymen as part of Task Force Deep Steel.

&#8220;The task force made an awesome name for itself across the United States Army,&#8221; said Lt. Col. Thomas Matsel, commander of 1-94. &#8220;During the past three months, these soldiers have proved they are more than Army strong. They are deep steel strong.&#8221;

Called &#8220;Proof of Principle,&#8221; the exercise matched the artillerymen with Eastern European infantryman.

The mission, which began in August, was intended to enhance joint training.

It also tested Romania&#8217;s potential as a training nucleus for the military.

Spc. James Vanhoose said he was impressed with the quality of Romanian soldiers as well as the weapons and equipment they used.

In all, 10 babies were delivered by 1-94 spouses during the deployment, and all husbands were redeployed home in time for the deliveries, Matsel said.

While the soldiers relished in their return home and the time spent with their families, there is much uncertainly regarding what the future holds for members of the unit.

As part of Army transformation, 1-94 is pegged for a move to Fort Riley, Wash., in 2008. Much of what the unit will be focused on in the coming months is preparing for that move, Matsel said.

But on Thursday the main focus was catching up on lost time.