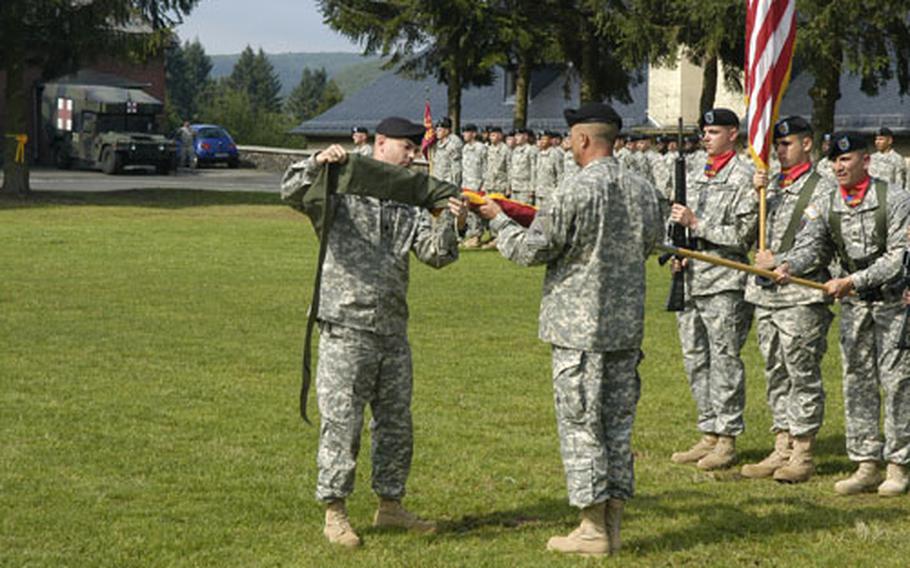 Lt. Col. Thomas Matsel, commander of the 1st Battalion 94th Field Artillery Regiment, cases the unit&#39;s colors during a farewell ceremony. The 1-94th, based out of the Strassburg Kaserne near Baumholder, is taking part in a three-month training exercise in Romania. (John Vandiver / S&S)

BAUMHOLDER, Germany &#8212; For Pvt. Michael Schoonover, the excitement of his unit&#8217;s three-month deployment to Romania is offset by the unease of parting with his 5-year-old son.

The 1st Battalion, 94th Field Artillery Regiment held a farewell ceremony Friday before departing for the training mission in Romania.

The battalion, based at Strassburg Kaserne near Baumholder, is part of Joint Task Force-East, which involves roughly 1,000 Americans drawn from the Army, Navy and Air Force. Mihail Kogalniceanu Air Base will serve as the task force&#8217;s headquarters.

The 1-94th will be working closely with forces from Romania and Bulgaria.

Upon arrival in Romania, the 1-94th will be recast as Task Force Deep Steel for the duration of the exercise, according to Lt. Col. Thomas Matsel, the battalion&#8217;s commander. The battalion will be engaged in mobile infantry tasks with Bulgarian and Romanian forces.

When the 1-94th gets back to Germany in late October, it will be back to business as usual. The focus will shift from mobile exercises to the battalion&#8217;s native specialty &#8212; field artillery, Matsel said.

While the exercises will be a learning experience for soldiers, the deployment also is a chance to demonstrate the viability of Romania as a training hub, Matsel said. About 350 soldiers from the 1-94th will be participating.

For some families, there is a certain sense of relief about this deployment. While separation is always hard, three months is a lot more manageable than 12 or 15 months apart &#8212; the typical length of a combat tour, said spouse Nikkia Leflore.