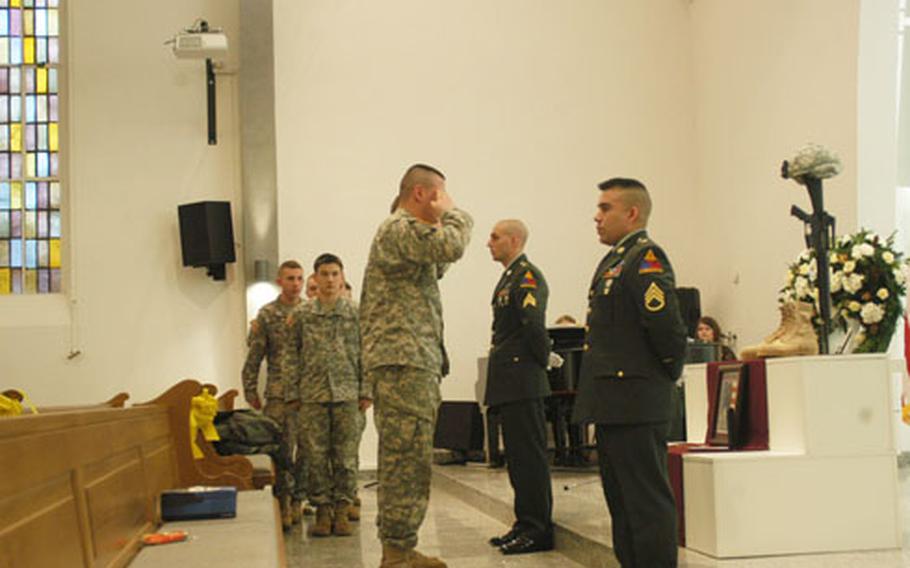 A soldier salutes a photo of Sgt. Brandon Augustus, a medic with the 47th Forward Support Battalion, during a memorial in Baumholder, Germany. Augustus died Dec. 11. (Seth Robbins/S&S)

BAUMHOLDER, Germany &#8212; Sgt. Brandon Augustus crossed out the days on a dry-erase board, keeping the private countdown as a reminder of when he would leave Iraq and return to his wife and 4-year-old son.

It wasn&#8217;t that Augustus, a 29-year-old medic known to his fellow soldiers as "Knuckles," wasn&#8217;t interested in his duties; his photo graced the Army values poster that hung in the headquarters of the 47th Forward Support Battalion. He simply missed his wife, Angela.

"He would go without sleep just to e-mail her or get in touch with her on the phone," said 1st Sgt. Melissa McFrazier from Baghdad, where she is deployed.

Augustus and his wife were reunited in early December when he returned on rest and recuperation leave. But their happy reunion did not last long. Brandon Augustus collapsed on the floor of their home Dec. 11, and was later pronounced dead by a German doctor.

Augustus, of Baton Rouge, La., was in good physical condition. Officials said he died of natural causes, but a cause of death was not released because it is still under investigation.

On a gray and drizzly Friday morning, soldiers packed the pews of Chapel One to say goodbye to Augustus, who was with Company C, 47th Forward Support Battalion. Men and women dabbed their eyes with handkerchiefs or hung their heads in disbelief that such a young man could die so suddenly. At the Camp Striker chapel in Baghdad, fellow soldiers built a traditional memorial tribute, displaying his boots, rifle and helmet. They also saluted his picture one last time.

"It was akin to losing a son," said McFrazier in an e-mail message.

"Augustus was the good son. He was the one who always made you proud and always removed any doubts that you had raised him properly."

He was recently singled out, among hundreds of his peers, as the Noncommissioned Officer of the Quarter for 2nd Brigade Combat Team, 1st Armored Division, and was looking forward to interviewing for NCO of the Year, said Lt. Col. Michael Russell, commander of the 47th Forward Support Battalion.

"As great as this accomplishment was, he still pushed his soldiers and others to compete like he did," Russell said in an e-mail. And his wife was always the first to hear about his latest award.

"As soon as he was dismissed from the winner&#8217;s circle," McFrazier said, "he always made a beeline for the phone trailers."

The soldiers under his command said he led by example, so much so that at the beginning of a shift he would often bestow his command status upon another soldier, Spc. Michael Woywood. Woywood immediately launched into a litany of questions for Augustus, but Augustus feigned ignorance. This routine always received some laughs.

"I remember countless times when he would come to me in the aid station&#8212;breathing hard, stomping around&#8212;and say, &#8216;Woywood. I&#8217;ve got a small tasking for you,&#8217;&#8197;" Woywood wrote in remarks read at the ceremony. "There was something about the way he emphasized tasking that made me feel he was about to give me the most important mission in the history of the American military."

His smile was broad, like the Cheshire cat&#8217;s, McFrazier said. "You weren&#8217;t sure if he was about to laugh, break into a grin, or if he had ate something earlier that day that just didn&#8217;t agree with him," she said.

Augustus was posthumously awarded the Bronze Star. He is survived by his wife and his son, Bryan. Both attended the ceremony Friday.

What his fellow soldiers said they will remember most is Augustus&#8217; common refrain when facing an arduous task: "I got it."