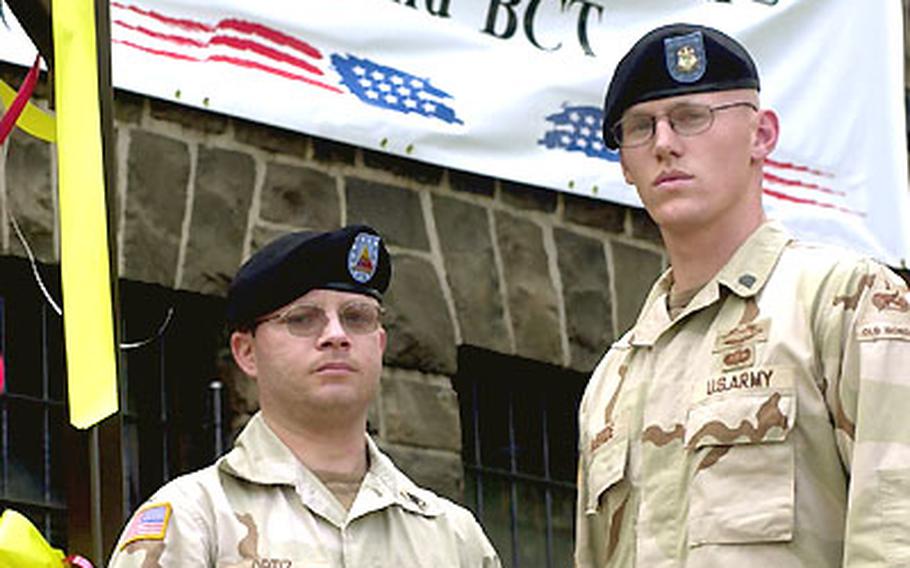 BAUMHOLDER, Germany &#8212; For Staff Sgt. Kimo Ortiz, 32, from Bronx, N.Y., the hardest part about possibly going back to Iraq isn&#8217;t facing ambushes and rocket attacks, it&#8217;s looking into the eyes of his wife and two kids and saying goodbye again.

A member of the 1st Armored Division&#8217;s Baumholder-based 2nd Brigade, Ortiz has been home only about a month, among the lead troops originally sent home to prepare for the return of the rest of the division.

Returning flights were halted last week, just prior to the Pentagon&#8217;s formal announcement on the extension, and now soldiers like Ortiz are on their way back to the war zone.

Meanwhile, leave for soldiers who have returned in recent weeks has been canceled, although soldiers already on leave have been allowed to finish their vacations.

Personnel managers are still working on who will go and when.

Even the division band &#8212; which had been sent back early to tune up for welcome-home ceremonies &#8212; is on its way back to the desert, he said.

An infantryman with the 2nd Brigade&#8217;s Company C, 2nd Battalion, 6th Infantry Regiment, McBride just returned from two weeks&#8217; leave with his wife on Friday after arriving back in Germany last month.

Meanwhile, hundreds of troops have joined the division since February when officials stopped forwarding replacements to their units downrange.

&#8220;I really want to get down there,&#8221; he said. There are about 20 new arrivals in his infantry company, about half transferring from units just returning from Iraq or Afghanistan, the other half who haven&#8217;t deployed into the combat zone yet.

He was transferred from the Army&#8217;s new Stryker Brigade just before it deployed to Iraq.

Not all the new arrivals are itching to get into the mix.

Pvt. Edward Cizik got here just a few weeks ago.