Baumholder translators say their job is best in the Army 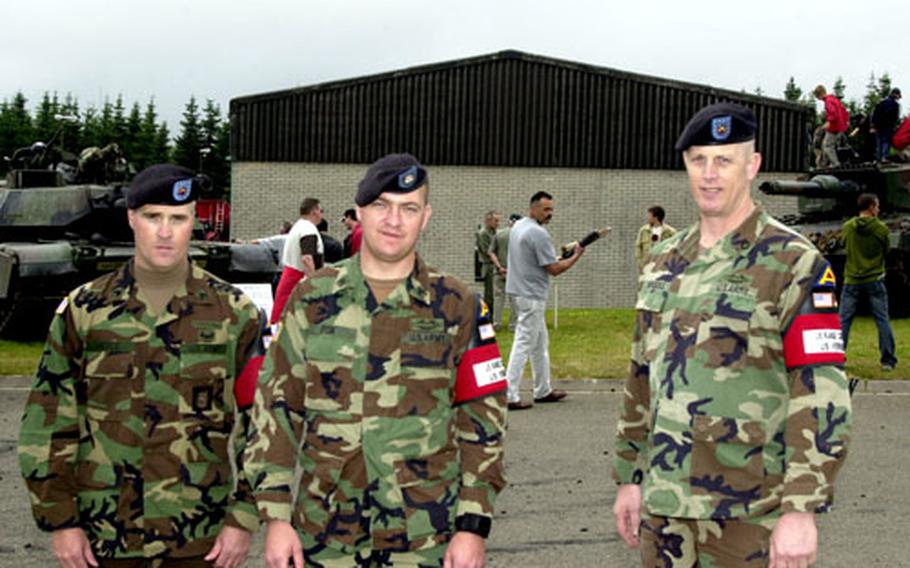 But what made him really stand out was the 7th Army Training Command band on his left arm. With both the Stars and Stripes and Deutschland&#8217;s red, yellow and black bars, it signified that he speaks both English and German.

All around him, Germans and a few American dignitaries and families from the neighboring 1st Armored Division base, H.D. Smith Barracks, drank beer, ate sausages and pea soup or climbed on American and German tanks and artillery at Lager Aulenbach.

It fell to Nimocks &#8212; rarity of rarities, a bilingual American &#8212; to fly the flag Saturday during an open house celebrating the 50th anniversary of the post-World War II German Army, or Bundeswehr.

Nimocks got his job as noncommissioned officer-in-charge of the four-soldier Baumholder operation of the U.S. Range Control Liaison Detachment because he&#8217;s fluent in German, though he largely taught himself during a stay in Vienna. But he remembers it was a few years ago, while courting a German girl, when his second language really started to sink in, &#8220;and it got to the point I could argue in German and win!&#8221;

As a range control soldier for the Grafenwoehr-based 7th ATC, he doesn&#8217;t do all that much arguing.

Nimocks, of Rockford, Ill., and his team liaise between American troops coming to train at Baumholder, headquarters for 1st AD&#8217;s 2nd Brigade and division artillery, and the German officials who control the range and training area.

He explains to German hosts how and where American commanders want to train and fire weapons. The Germans, in turn, explain local range rules and regulations.

Once everyone is happy, soldiers typically have more flexibility here than at U.S. training areas, Nimocks said.

And as good as Nimocks is at making people happy, Sgt. Jens Fisk may be even better. Fisk speaks German so fluently that most Germans think he is a native, said his friend Sgt. 1st Class Andreas Gante of the Bundeswehr.

In fact, Fisk is German. He was born in Schwetaingen 29 years ago to an American father and German mother. A former Marine, he&#8217;s now a desk sergeant at the 30,000-acre range. Both soldiers say they use tact and language skills as neutral conduits of information, favoring neither the Army nor the Germans, though they do sometimes act as diplomats when differences arise.

Fisk has the advantage of understanding not just the language, but the cultural nuances. In fact, he said, he&#8217;s still learning English after growing up in a home where his parents spoke German until the family moved to the United States when he was 16.

His English really started to improve in 1998 when he met his wife, Danielle, and his best friend in the Marines, Joe Conner.

A former 11 Bravo with 1st AD&#8217;s 2nd Battalion 6th Infantry Regiment, the Iraq veteran also brings his combat arms expertise to his new job, said his boss Nimocks. And both occasionally tag along with the Germans and fire their weapons.