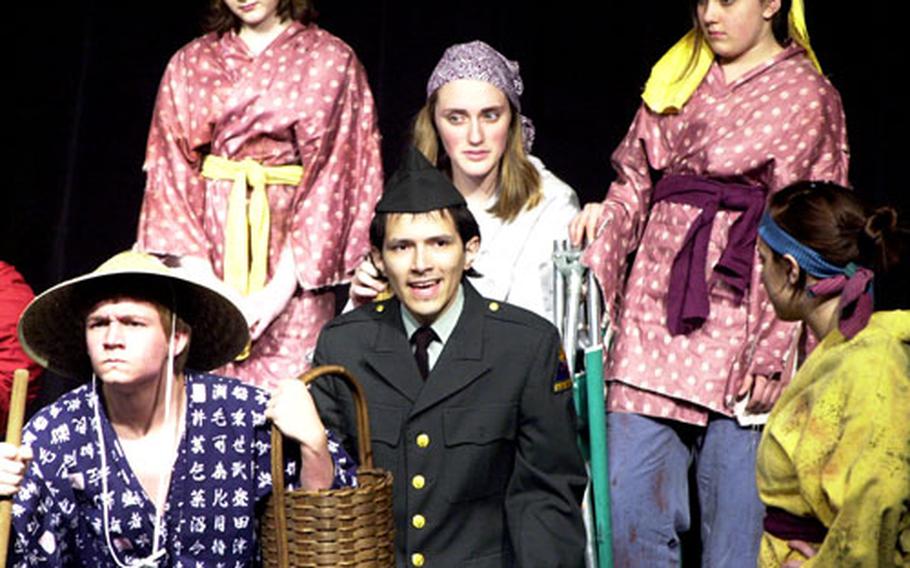 How do you put on a play about a village with just 13 students? Most cast members in “Teahouse of the August Moon” play several characters, then do all the set changes between acts. Front row, from left, are Austin Strickland, Troy Zapata and Tara Turpin. In the back row are, from left, Margret Lampe, Raechel Inbody and Ashley Deane. (Terry Boyd / S&S)

BAUMHOLDER, Germany &#8212; Anyone can call himself an actor, but Baumholder American High School&#8217;s theater program has higher standards.

Most of the 13 students brave enough to audition for the school production of &#8220;Teahouse of the August Moon,&#8221; didn&#8217;t merely learn their lines, they learned them in Japanese.

Acting means reaching the audience through emotion and body language to make certain &#8220;they know what we&#8217;re talking about,&#8221; even when they&#8217;re hearing dialogue in a different language, said Megan Winfree, 15, a sophomore who plays Higajiga.

Higajiga is one of the outspoken residents whom Okinawa Capt. Troy Fisby &#8212; the rather naive, well-intentioned hero of &#8220;Teahouse&#8221; &#8212; must deal in this East-meets-West comedy as Fisby presides over the post-World War II reconstruction of the island.

&#8220;Teahouse&#8221; is demanding for any trouper, especially one with a 13-student cast. Troy Zapata, the lone senior, plays the Fisby role.

A smiling Carol Rudd, the Baumholder drama teacher, said she prides herself on choosing plays &#8220;that make their lives miserable.&#8221;

What the Baumholder drama teacher means is that she picks plays that challenge on every level &#8212; dialogue sophistication, plot complexities and the challenges of doing a scene, then becoming the crew, and moving elaborate sets that the cast has designed and built.

To pull off &#8220;Teahouse,&#8221; her players learn Japanese, part of a device that sets up the comedy between Fisby and his wily interpreter Sakini (played by junior Tara Turpin) and the other Okinawans who want a teahouse, rather than the schoolhouse the Army thinks they should have.

To prepare, the cast added two weeks to the normal six-week rehearsal, using the extra time to work only in Japanese, &#8220;to get comfortable with the language,&#8221; to feel how it feels to speak it, said Rudd, who taught for seven years at Department of Defense Dependents Schools in the Pacific.

The script calls for Samantha Grarina, as Lotus Blossom the geisha, to learn pages of dialogue in Japanese, which is unrealistic, said Rudd. So Samantha and other students improvise from simple Japanese phrases into a faux-Japanese for extended scenes.

With Samantha winging it, her cues from Lotus Blossom &#8220;are different every night,&#8221; Tara said.

That means success hinges on learning the rhythm of the dialog rather than the words, and the pace of the scenes, said Tara and Zachary Splittstoesser, a sophomore who plays a Japanese man, a Japanese woman and an American psychiatrist.

And while the Japanese element is neat, players and director emphasize the play is the thing.