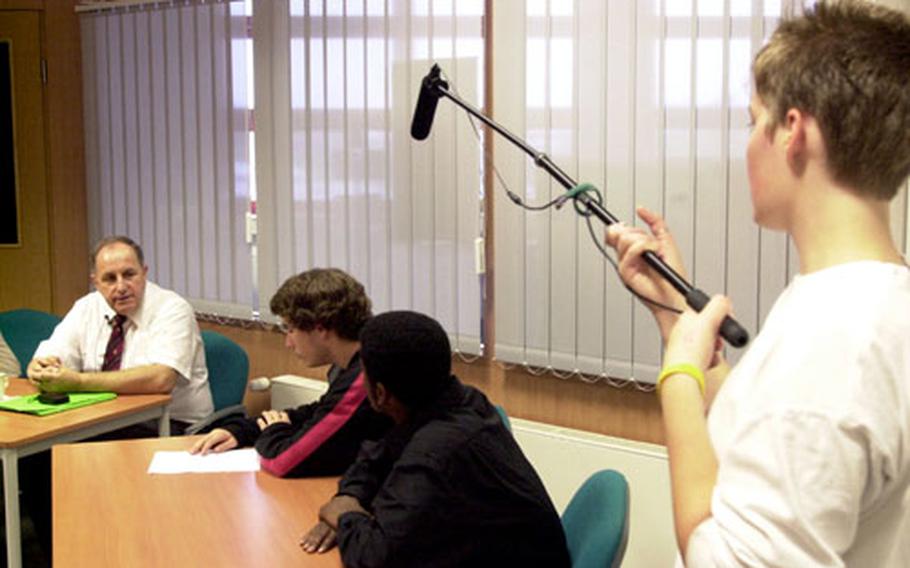 Volkmar Pees, Baumholder’s district mayor, gives his recollections for “Side by Side in Baumholder: 60 Years of German and American Stories,” an oral history of relations between the U.S. military community and Germany. Baumholder High School seniors Nicolas Heinz, seated center, and Allen Sims listen as Rebekah Melvin holds the microphone. (Terry Boyd / S&S)

BAUMHOLDER, Germany &#8212; With the notable exceptions of, say, wars, assassinations and moonwalks, history is rarely considerate enough to be obvious the instant it happens.

Rather, years of memories and recollections may stay locked in peoples&#8217; minds, waiting to be freed.

Now, historians &#8220;realize the memories of everyday people, not just front-page news and the autobiographies of the rich and famous&#8221; have historical value, said Rachael Wilmont, a 17-year-old Baumholder High School senior, narrating the podcast created for &#8220;Side by Side in Baumholder: 60 Years of German and American Stories.&#8221;

Finding and collecting those memories, then turning them into a documentary, is Baumholder High&#8217;s mission, say Wilmont and Rebekah Melvin, the 17-year-old senior who wrote the script. Failure, Melvin wrote in her script, means losing an important piece of history.

For the massive, ambitious history project, students and teachers in Baumholder plan to pull together 60 years of German-American relations as part of a Department of Defense Dependents Schools initiative in communities where Americans may not be five years from now because of the ongoing drawdown of U.S. military forces.

Deciding just what belongs to posterity and what&#8217;s filler is harder than it looks. In the end, &#8220;Side by Side&#8221; should somehow synthesize all the different people and all the different views into one work, said Nicolas Heinz, 17, a senior who, as a native German speaker, does interviews and voice-over translations for the documentary team.

Though there are considerable technical challenges &#8212; video, audio and editing &#8212; there are no limits.

Alsup and others make it clear they envision a sophisticated, comprehensive documentary, with German interviews and English voice-overs interspersed with outside materials such as historical photos and even video, Heinz said.

The project &#8220;is coming together a piece at a time&#8221; because there&#8217;s so much rich material, and may take two or three years to complete, said Bob Hartline, director of Baumholder&#8217;s celebrated video program.

The project can be viewed on the Internet at http://www.eu.dodea.edu/ed/vid/oral-baum1.mp4 with the latest version of the QuickTime video application.

The initial footage is dramatic, with Germans in Baumholder recalling as golden the years after the Americans succeeded the French, who robbed and plundered as post-World War II occupiers. In his interview, Volkmar Pees, Baumholder district mayor, remembers being a little boy when American soldiers gave him candy bars as they pushed into Germany before the French came.

The relationship only got better.

Herbert Grimm, 81, a Baumholder historian and author who was a German prisoner of war in the States, recounts the arrival of the 8th Infantry Division in 1951 and 1952, followed by the United States rebuilding what is now H.D. Smith Barracks. It was &#8220;the largest single construction site in the federal republic,&#8221; Grimm said, adding that the work drew 6,000 workers to a town of only 4,000 people.

DODDS guidance originally was to document relations between Germans and the school. But with no American personnel around from 1954, when the school was founded, that would have made for a work of limited interest, teachers say.

Baumholder is first to embrace the project, but DODDS officials expect schools in Italy, Belgium and other countries to follow, Ridge said.

History should cover different societal levels &#8212; not just the mayors and generals, but the cleaning woman who worked on base for 40 years, McGowan said.

Whatever the finished product, &#8220;Side by Side&#8221; already is a success because students are going above and beyond, doing critical thinking and learning to ask questions, she said.