Andrea Young, of the "Evil Tomatoes," chucks a "grenade" for points during the Iron Spouse Challenge Thursday at Baumholder. (Ben Bloker / S&S)

Andrea Young, of the "Evil Tomatoes," chucks a "grenade" for points during the Iron Spouse Challenge Thursday at Baumholder. (Ben Bloker / S&S) 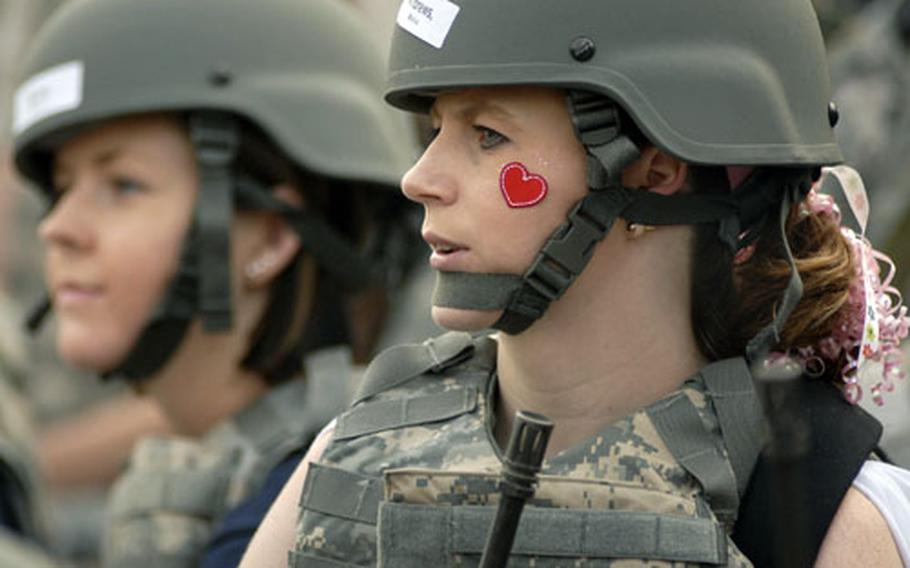 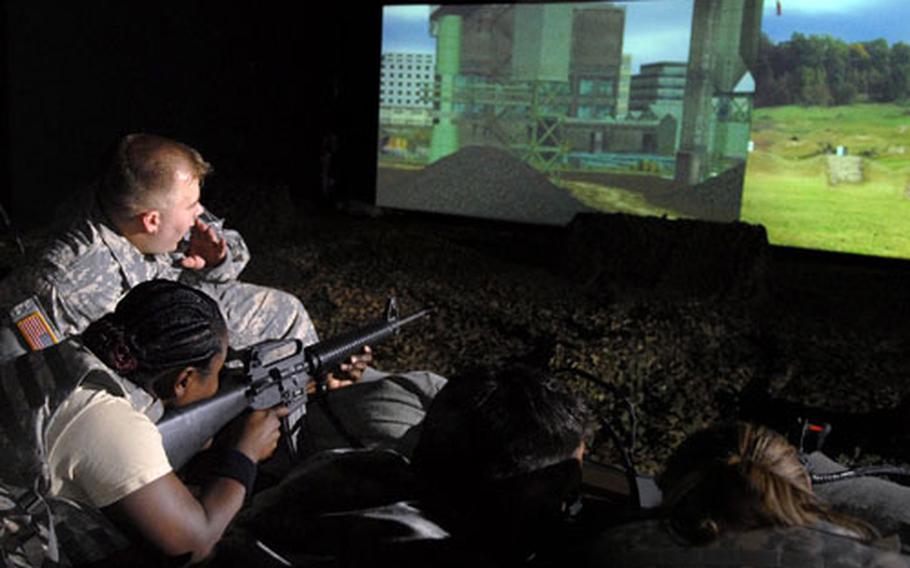 Amanda McConnon, followed by the rest of her team, the "Sweaty Betties," high step their way through an obstacle course during the Iron Spouse Challenge. (Ben Bloker / S&S) 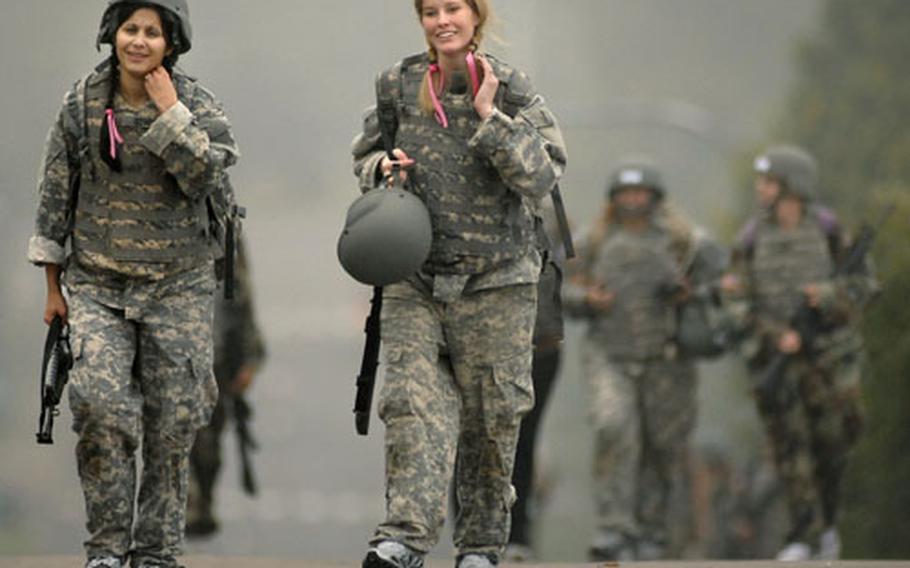 Yaelmie Gomez, left, and Brittni Marco, members of the "Scouttets," march up a hill to their next event during Baumholder&#39;s Iron Spouse Challenge. (Ben Bloker / S&S)

BAUMHOLDER, Germany &#8212; Jeff Reynolds, a former soldier with two tours in Iraq under his belt, seemed pretty self-assured as he and his fellow Army spouses learned about the mechanics of firing an M-4 with accuracy.

Reynolds, one of the 125 Baumholder spouses who spent Thursday playing soldier for a day, spoke with authority about firing a weapon and raised his hand with answers ready.

At the "Iron Spouse Challenge," 32 teams of Sweaty Betties, G.I. Janes and Desperate Housewives squared off to see which squad could crawl through the mud fastest and fire paintballs at opponents with the sharpest aim.

But did the Lady Bulldawgs, whose four-person team included war veteran Reynolds, think they had a leg up in the soldiering competition with a man on their side?

"No!" the team shouted in unison, less than blown away by Reynolds&#8217; performance halfway through the event.

While Baumholder&#8217;s 2nd Brigade, 1st Armored Division is deployed in Iraq, family readiness leaders organized the challenge as a way to connect with their far-flung spouses. With shouts and hooahs, the teams marched around U.S. Army Garrison Baumholder doing their best imitations.

Not everyone would make it through to the end, though.

"We lost our teammate," said Nicole Baker of Team Bravette.

For the Bravettes, the 100-meter obstacle course plus the steep hike to the shooting range was too much for one member. Exhausted, she had to drop out, they said.

The competition started with a 100-meter dash, which included a low crawl, tire run and log carry, and tested both speed and agility.

Posting a time of 1 minute and 30 seconds, Scoutettes&#8217; Brittni Marco said she was pleased with her team&#8217;s performance on the obstacle course.

"We booked it," said Marco.

The obstacle course was followed by the grenade toss in which Iron Brigade spouses were tested for accuracy and their ability to maneuver in the prone position, peeking out and ducking back down for cover.

Despite the instruction, many of the spouses clearly had a hard time putting their softball-playing days behind them as they launched line-drive bullets at the targets.

"What happened to all the training we did?" shouted one instructor.

The final event of the challenge was a paintball version of capture the flag. The spouses sprayed their pellets all around.

Though the Lady Bulldawgs had Reynolds on their side, it wasn&#8217;t enough to pull out a top-three finish. The top team of the day was the Powder Puffs, followed by Flowering Jade and the Golden Girls.

As for Reynolds, he acknowledged that his soldiering skills have diminished in the past year or so. Not much working out, he said. While his wife is deployed, his attention has been on his daughter, he said.

Team name aside, "I saw the flier for this and I thought it would be something fun to do," he said. "I tried to get them to change it to just Bulldawgs."

The ladies refused, he said.