Baumholder soldier won’t let a brain tumor get him down 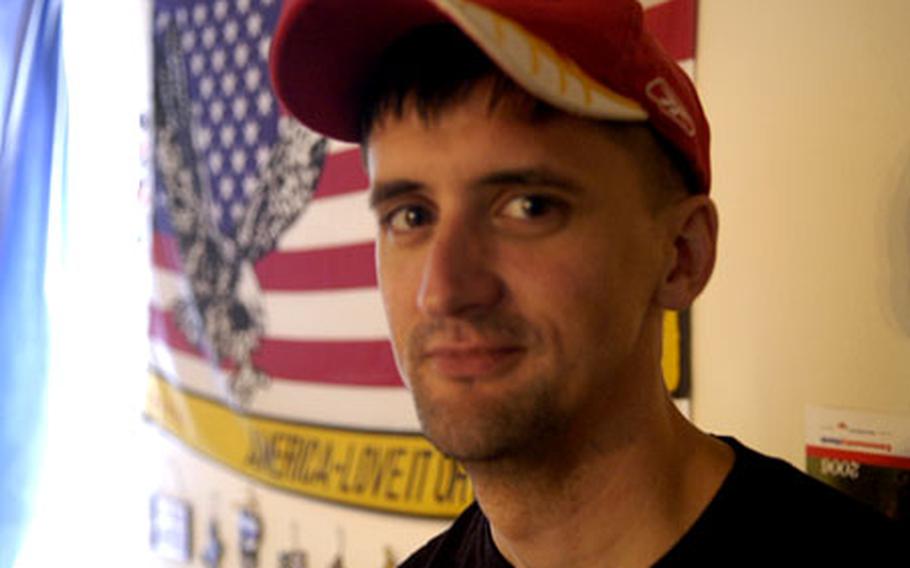 When the school-age children spot Staff Sgt. Kevin L. Collins on the playground or out and about on post, they often shout the nickname and rush to greet him.

Collins, a military police officer with the Provost Marshal&#8217;s Office, is well known to many in Baumholder&#8217;s Army community for the work he does as the Drug Abuse Resistance Education officer in the schools.

What&#8217;s less known is that the husband and father of two is battling terminal cancer.

Through it all, he has managed to fight the odds and stay in the Army. With the time he has left, Collins says he wants to stay on the job as long as the Army will let him.

Collins, who was diagnosed with cancer in 2004, joined the Army when he was 19. He re-enlisted a month ago, and at that time requested to remain in Baumholder for another three years.

The request is working its way through administrative channels, he said.

&#8220;We are sympathetic to SSG Collins&#8217; condition and want to give him the most appropriate consideration possible,&#8221; Col. Ray A. Graham, commander of U.S. Army Garrison, Hessen, said in a prepared statement. &#8220;We will ask that he be re-evaluated by medical personnel to determine his fitness level and ability to perform his assigned duties.

If he is deemed fit and able, &#8220;he will have the option to request stabilization in his current unit of assignment and submit any necessary tour extension requests,&#8221; he said.

In the meantime, Collins is going about his business. Some doctors have told him he&#8217;s got three to five years. Others say it could be 10.

Searing pain, which can strike out of nowhere, started inside Collins&#8217; head during his 2002 deployment to Afghanistan. The pain followed him to Iraq in 2003, but Collins pressed on, uncertain about what was wrong. In 2004, following his tour in Iraq, an MRI was performed at his then-home station of Fort Drum, N.Y. The cause of the head-splitting aches was quickly uncovered.

In 2005, Collins was assigned to his job in Baumholder. Because of his health, it was a six-month struggle to keep those orders intact, he said.

Sgt. Todd Guyette, Collins&#8217; boss at the Provost Marshal&#8217;s Office in Baumholder, said Collins is able to accomplish his missions.

If the rules were bent a bit to get Collins to Baumholder, he&#8217;s managed to fulfill his obligations since he&#8217;s arrived, Guyette said.

For Collins&#8217; wife, Bianca, the concern is that her husband&#8217;s unique situation could be overlooked in the bureaucratic shuffle.

Bianca says the job is the best medicine for Kevin and gives her husband something to look forward to.

Collins acknowledges it would be easier to leave the Army. In fact, his financial situation would actually improve since he&#8217;s eligible to receive Social Security, he said.

It also would be easier to just stay in bed on the days when the pain seems unbearable.