Baumholder service honors ‘brother to us all’ killed in Iraq 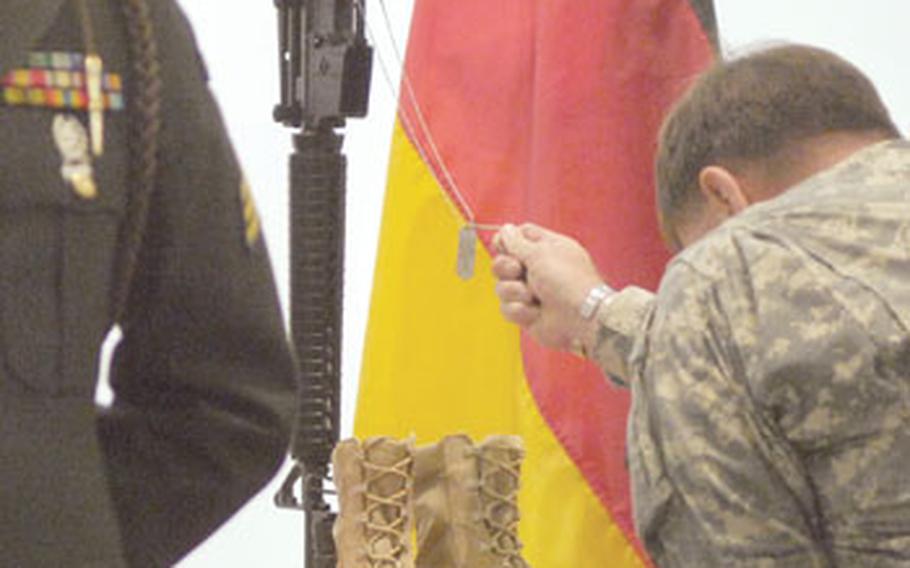 A soldier pays his respects to fallen soldier Spc. Carlo Alfonso during a memorial ceremony Wednesday at a chapel in Baumholder, Germany. Alfonso, 23, assigned to the 40th Engineer Battalion, was killed Aug. 26 by a roadside bomb while on patrol in Baghdad’s Sadr City. He was attached to 1st Battalion, 6th Infantry Regiment at the time. (Ben Bloker/S&S)

BAUMHOLDER, Germany &#8212; Cpl. Carlo Alfonso was the kind of guy who would show up unannounced, ready to lend a hand.

When a family from his unit arrived in Baumholder, he was there to help unpack. Then he offered to cook dinner, one soldier recalled.

Whether it was pitching in to do some heavy lifting or lightening the mood with a joke, fellow 2nd Brigade, 1st Armored Division soldiers said Alfonso was the kind of guy you always wanted around.

"He was a great family man and a brother to us all," said Spc. Paul Kromshroeder, a fellow soldier with the 40th Engineer Battalion.

Alfonso, 23, whose unit was attached to the Iron Brigade&#8217;s 1st Battalion, 6th Infantry Regiment, was killed Aug. 26 when his vehicle was hit by a roadside bomb while on patrol in Sadr City, Iraq.

Words of remembrance and messages from fellow soldiers and commanders were shared Wednesday during a memorial ceremony at Baumholder&#8217;s Chapel One.

Task Force 1-6 commander Lt. Col. Brian Eifler and Alfonso&#8217;s company commander recalled a person known for his good humor and close bond to his family back home in Spokane, Wash.

"He took the work out of work," said Capt. Justin Agostine, commander of the 40th Engineers&#8217; Company A, which is stationed in Sadr City.

For the soldiers who served alongside him, it was that good humor that made a tough mission easier to endure.

"He made us laugh and smile when we needed it," said Staff Sgt. Levon Sains, Alfonso&#8217;s squad leader.

During the ceremony, soldiers tried to recall the good times. They remembered how Alfonso would go on and on, talking about the excitement of shopping for a minivan for his young family. He also spoke about what it was like growing up in the Philippines and how serving in the Army was his true calling in life.

Soldiers also said their comrade was a man with many nicknames, including Carlo "there you go" Alfonso, which was earned for his ability to escape tackles on the football field.

Born in the Philippines, Alfonso moved to Spokane in 1997 with his mother. He was working toward obtaining his U.S. citizenship at the time of his death. Just a couple of weeks earlier he also re-enlisted in the Army for another four years.

"He said he couldn&#8217;t see himself doing anything else," Sains said.

Alfonso is the fourth Baumholder soldier to be killed since the brigade deployed in April. He is survived by his wife, mother and 2-year-old son, Kyle.

Pfc. Tyler Latham, who was Alfonso&#8217;s roommate both in Baumholder and in Iraq, said humor always seemed to find its way into their conversations.

Latham, who suffered an injury to his arm in the attack that killed Alfonso, said moments before the explosion his friend was cracking jokes as usual.

"We passed a guard shack and, boom, we were hit," said Latham, who struggled to hold back tears as he spoke of Alfonso. "He was a really good guy."

Sains said he takes comfort in a statement that Alfonso would make again and again whenever anyone expressed concern about how things were going.