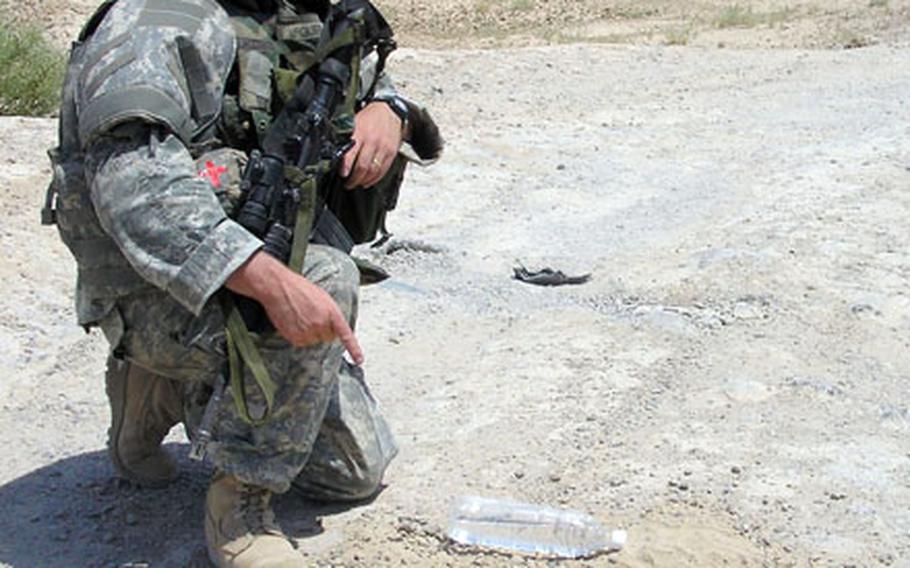 One day, Mike McGuire did what any good sports fan with some money in his pocket would do: He headed for the stadium and bought the best ticket available.

Eight rows behind the dugout at Busch Stadium in St. Louis, he wound up sitting next to Peter King, the famed Sports Illustrated writer and TV football analyst.

In the fourth inning as the Cardinals played the Florida Marlins, the sportswriter turned to McGuire to say hello. Their conversation in June 2005 started a friendship that led to McGuire contributing to King&#8217;s weekly columns at the Sports Illustrated Web site, inspiring thousands of readers.

They traded e-mail addresses, and when McGuire&#8217;s unit deployed to the war zone, his e-mails to King started running at the bottom of King&#8217;s &#8220;Monday Morning Quarterback&#8221; column.

For a year, King&#8217;s readers were updated on the exploits of McGuire&#8217;s unit, which eventually was based at Camp Blue Diamond in Ramadi. There, McGuire and his soldiers combed Route Mobile for roadside bombs.

Throughout the year, McGuire wrote about his work and his soldiers. There was a Pfc. Jewell, Spc. Brezinski and others. There were no first names, because in Iraq, especially, a soldier&#8217;s rank is his first name.

Ten months into the deployment, McGuire wrote an e-mail about Sgt. Allan R. Bevington, who was killed on Sept. 21 by an explosive after getting out of his vehicle. When news of it ran in King&#8217;s column, more than 1,000 readers sent e-mails of condolence to King, who forwarded them to McGuire and his unit.

One example: &#8220;I&#8217;ve never skipped through the first part of your column to get to the item about Mike McGuire&#8217;s men, but I did so this morning with a sense of dread and foreboding. I now wipe the tears from my eyes after what I have just read. God bless Sgt. Bevington, his family, Mike and all his men.&#8221; &#8212; Doug Kelly, Sacramento.

McGuire&#8217;s next few dispatches, such as this one from October, were somber:

Like a lot of troops, McGuire, a father of five, did not talk much shop with his wife, Pam, while he was downrange. Pam McGuire said she saw another side of her husband through King&#8217;s columns.

For King, McGuire&#8217;s dispatches were important because they connected his readers to what was happening half a world away.

McGuire is back in Baumholder training another platoon and expects to deploy again in a year. He said his soldiers were heartened by King&#8217;s interest.

To read Peter King&#8217;s entries about McGuire and his unit, visit SI.com here.