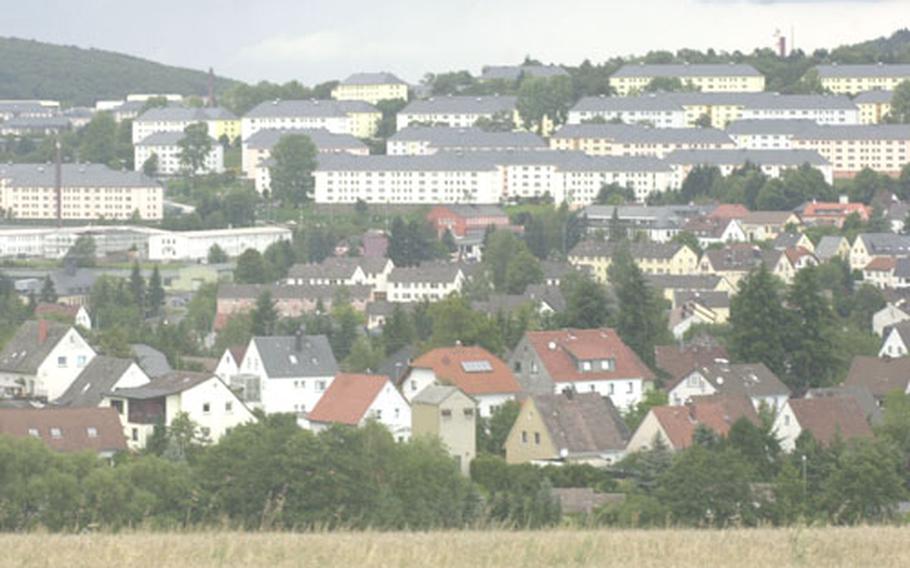 H.D. Smith Barracks dominate both Baumholder&#39;s otherwise rural setting and its financial health. Adolf Hitler created the base amid the hills of Rheinland-Pfalz because the area was lightly populated, and the farmers were happy to sell their land. Baumholder was the perfect training ground, German army commanders agreed, because of its thick forests, rough terrain and harsh winters. (Terry Boyd / S&S)

German officials &#8212; noting that Baumholder is a major U.S. Army base close to Ramstein Air Base and the Kaiserslautern Military Community &#8212; hope its location will keep it open.

Senior U.S. defense officials confirmed at a Pentagon background briefing on Monday that the 1st Infantry Division and 1st AD will leave Germany. Pentagon officials emphasized the transformation of forces will occur over 10 years, and so far, there are no appropriations to build facilities in the United States to accommodate the division&#8217;s four land brigades, two aviation brigades, division artillery and headquarters that are all currently in Europe.

Riding on the outcome is the economic well-being of several rural communities in the state of Rhineland-Palatinate, most pointedly Baumholder.

U.S. officials say there is no decision on Baumholder&#8217;s fate.

&#8220;Anything to do with the [transformation] announcement ... we simply don&#8217;t have any more specific information. It would only be speculation,&#8221; said Kim Walls, a spokeswoman for the Installation Management Agency-Europe.

However, Karl Peter Bruch, the interior minister for Rhineland-Palatinate, told Stars and Stripes that during meetings at the Pentagon in May, Department of Defense officials showed him the list of U.S. bases in Germany that will remain. Baumholder was not on it.

On his first visit to talk to Pentagon policy makers &#8212; including Raymond F. DuBois, undersecretary of defense for installations and environment &#8212; DOD officials showed him a list of surviving bases: the Ramstein/Kaiserslautern complex, Spanghdahlem Air Base and Baumholder, Bruch said.

An Army official at the Pentagon said she did not know of any list that Bruch had mentioned. A spokesman for DuBois did not respond to queries by deadline.

If H.D. Smith Barracks, satellite installations, schools and four major housing complexes close, it would be &#8220;a catastrophe&#8221; for his town of 5,000, said Mayor Volkmar Pees.

The unemployment rate is about 9 percent for the county of Birkenfeld, which includes Baumholder, though local officials estimate the rate is substantially higher in the Baumholder area.

The departure of more than 5,000 soldiers, many of whom live on the economy, along with 600 German high-paying base jobs, would be an economic disaster, Pees said. Multiply those 600 jobs by a factor of four, Bruch said, calculating that about 2,400 local jobs &#8212; from retailers to contractors &#8212; would fall victim to the base closing.

The U.S. base at Baumholder pumps about $200 million per year into the local economy, Bruch said during a Wednesday interview in Mainz. That economic injection is worth $1.4 billion annually if all three major bases in the state &#8212; Baumholder, Ramstein Air Base and the Kaiserslautern Military Community &#8212; are included.

Despite Baumholder not being on the list of surviving bases, Pees, Bruch and other German officials remain optimistic that U.S. officials will take advantage of Baumholder&#8217;s proximity to Ramstein.

The largest of the 1st AD bases in Germany &#8212; and the largest collection of combat-arms units outside the continental United States &#8212; Baumholder is home to the 2nd Brigade and Division Artillery.

With President Bush&#8217;s announcement last week of troop reductions in Europe, Baumholder may join a long list of U.S. bases in Germany closed since the early 1980s, including Bad Kreuznach, the former 1st AD headquarters.

The first transformation changes aren&#8217;t scheduled to begin until 2006, and are projected to take a decade. German officials expected the plan to have a four-year window.

Just what will happen in Baumholder is far from clear. Basically, it comes down to reading tea leaves, and the Pentagon and Army have given mixed signals as to the base&#8217;s fate.

Last year, Marine Gen. James Jones, commander of U.S. forces in Europe, told Stars and Stripes that construction funding &#8212; especially for housing &#8212; would cease at bases likely to close. Baumholder has a number of new housing renovation projects slated through 2006.

Testifying in March 2003 before the House Armed Services Committee, Gen. Montgomery Meigs, former U.S. Army Europe commander, called Baumholder &#8220;the likely site of a Stryker Brigade&#8221; because it is close to Ramstein, the Air Force&#8217;s staging point for both European Command and Central Command operations.

But now, that Stryker brigade appears to be headed to Grafehw&#246;hr Training Area, 400 miles across Germany, near the border with the Czech Republic &#8212; a move favored by the German federal government, Bruch said.

Earlier this year, Maj. Gary Tallman, Stryker Brigade spokesman at the Pentagon, told Stars and Stripes that Baumholder was not on the list of bases to receive the Stryker units.

&#8226; Its location about 40 miles northwest of Ramstein, which U.S. officials have said will remain. Also nearby is the Kaiserslautern Military Community, which is the logistic hub for U.S. forces based in Europe.&#8226; At about 25,000 acres, the third-largest maneuver/training area in Germany, behind those in Grafenw&#246;hr and Hohenfels. However, unlike those training facilities, the Baumholder site has no high-tech capabilities.&#8226; A just completed, $13 million, state-of-the-art motor pool for the 4th Battalion, 27th Field Artillery Regiment, and two updated motor pools for the 1st Battalion, 6th Infantry Regiment and the 2nd Battalion, 6th Infantry Regiment.&#8226; The largest Army dental clinic in Europe.&#8226; An airfield with a 572-meter, or 1,800-foot-plus runway &#8212; easily long enough to accommodate C-130 transport aircraft.

At that airfield, which currently is unused, Baumholder is getting a platoon of unmanned aerial vehicles, or UAVs. The division-level intelligence assets will grow to a company-sized elements, according to U.S. Army Europe officials.

The small UAVs, called Hunters, currently are based at Fort Hood, Texas, and are scheduled to arrive at several bases in Europe later this year, or early in 2005.

The UAV unit may or may not be the harbinger of change at Baumholder. Bruch said he&#8217;s confident that the Pentagon is, at the behest of German officials, &#8220;making an earnest attempt&#8221; to find a use for Baumholder, including light, rapidly deployable units that also could use the training area.

In Baumholder, local officials are hoping for a death-row reprieve in the form of the U.S. presidential elections.