The morning sun glints off the bugle of Staff Sgt. Karl D. Skelton as he plays taps at the end of a memorial for 1st Lt. Scott Love and Pfc. David “Nick” Crombie. (Terry Boyd / S&S)

The morning sun glints off the bugle of Staff Sgt. Karl D. Skelton as he plays taps at the end of a memorial for 1st Lt. Scott Love and Pfc. David “Nick” Crombie. (Terry Boyd / S&S) 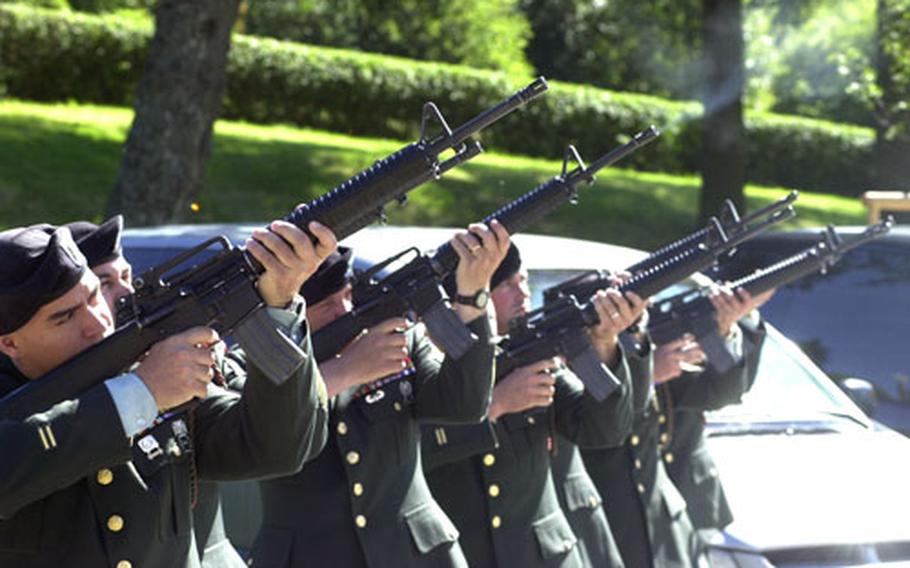 First Lt. Scott McLean Love, 32, of Huntsville, Ala., and Spc. David &#8220;Nick&#8221; Crombie, 19, of Winnemucca, Nev., were killed Wednesday when a roadside bomb hit their patrol in the insurgent stronghold of Ramadi, west of Baghdad.

In Love, the Army lost an accomplished, seasoned leader and an Arabic-speaking officer, said those who saluted him. Joining the Army after earning a bachelor&#8217;s degree in film at Florida State University, Love attended the Defense Language Institute at Monterey, Calif., as a noncommissioned officer. Love could read, write and speak Arabic fluently, said 2nd Lt. Joshua Adelman, 2-6 rear detachment commander, who gave his eulogy.

&#8220;Quick to laugh, slow to anger,&#8221; the former enlisted soldier had the complete trust and confidence of his NCOs and soldiers, said Adelman. Love was a distinguished honor graduate in his NCO Academy class and went on to get his commission in 2003. As an officer, Love was the kind of leader to be &#8220;the first down with the boys breaking track,&#8221; working on Abrams fighting vehicles, Adelman said.

In an interview after the ceremony, Adelman quoted Sgt. Jason Welsh, who was wounded in the attack that killed Love and Crombie, and was treated at Landstuhl Regional Medical Center.

Crombie, a medic, had spent only a brief time with Company D downrange in Kuwait before being called up in the reserve force to Iraq. But his medic skills had been specifically requested for the mission by Love, &#8220;a patrol (Crombie) could have sat out,&#8221; said Capt. Daniel Costin, who gave the soldier&#8217;s eulogy. &#8220;He died knowing we could depend on him.&#8221;

After deploying to Iraq, Crombie sent a letter to his mother, Jennifer Laybourn, explaining how he had saved the life of an Iraqi soldier who had been shot, according to a Yuma (Ariz.) Sun newspaper report. &#8220;He admitted he was scared, but it didn&#8217;t stop him,&#8221; Laybourn was quoted as saying.

Love is survived by his daughter, Vina Love, and his parents, Robert and Lydia Love, of Huntsville.

Crombie is survived by his mother; his stepfather, Dennis Laybourn; and brother Jason Laybourn, 13, all of Winnemucca, Nev. He is also survived by brother Dan Crombie, 23, of Tucson, Ariz.; and grandparents Lannes and Mary Brock of Yuma.

Crombie will be buried in Arlington National Cemetery in Virginia.