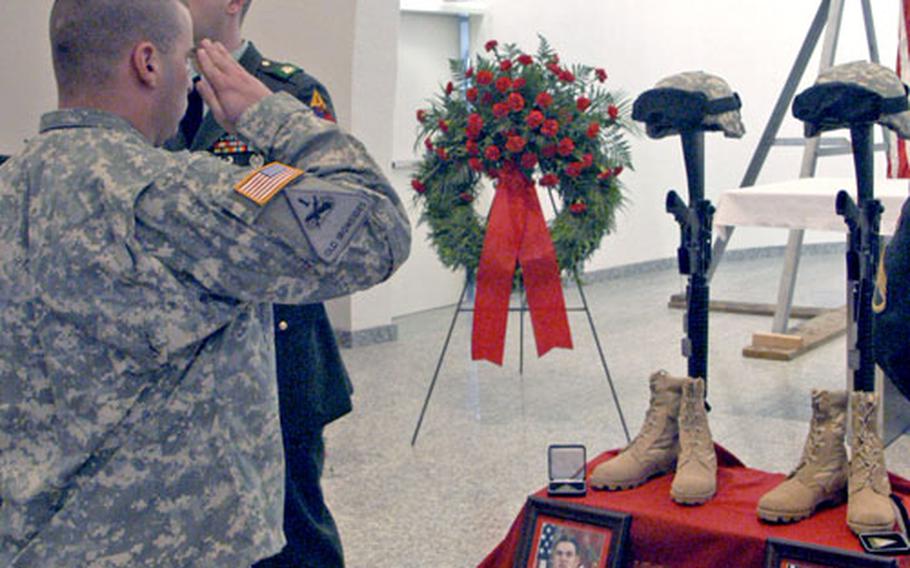 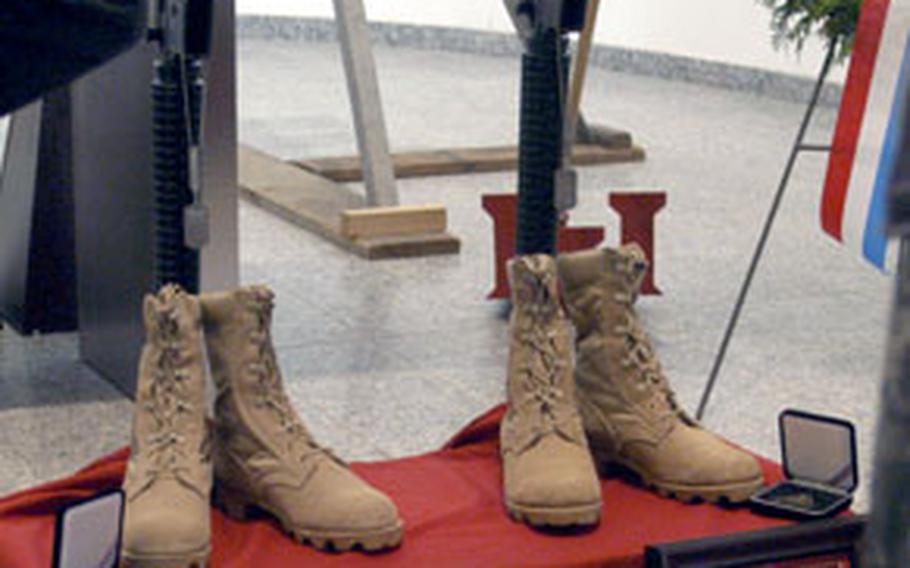 A display of boots, rifles and helmets rests behind pictures of Sgt. Reyes Ramirez and Cpl. Robert L. Jones, members of the 40th Engineer (Combat) Battalion who were killed earlier this month in Ramadi, Iraq. (Matt Millham / S&S)

Two soldiers whose names were called during a roll call at Baumholder, Germany, Tuesday weren&#8217;t there to give a reply. The soldiers, members of the Baumholder-based 40th Engineer (Combat) Battalion, had been killed in Iraq earlier this month and were memorialized during a service at their home base.

Hundreds of people filled Baumholder&#8217;s Good Samaritan Chapel on Tuesday to pay tribute to the fallen soldiers, both of whom were in Iraq for their second tours.

One of Jones&#8217; comrades, Sgt. John P. Goodrow, remembered the Milwaukie, Ore., native as a joker with a compassionate side.

During their first stint in Iraq with the 40th Engineer Battalion, part of the 2nd Brigade Combat Team, 1st Armored Division, Jones was known for his candor and practical jokes. Goodrow said that if you slept next to Jones, you could expect to come back to your rack to find everything you had turned upside down.

When the unit was called back for a second trip to the desert, Jones thought he had already seen enough of Iraq. Goodrow told the hundreds of people who gathered at the memorial service how some of the unit&#8217;s new troops couldn&#8217;t wait to get to the war. Jones was less enthusiastic about the prospect of heading back.

Jones made it a point to set the new soldiers straight. War wasn&#8217;t fun and games.

When the 40th was told that it was going to provide theater support from Iraq&#8217;s relatively innocuous neighbor Kuwait, Jones wasn&#8217;t upset. He and many of his comrades were hopeful rumors that the deployment would last just six months were true.

But he was shocked and disappointed when, after almost half a year in Kuwait, the 40th was given the order to head north into Iraq, Goodrow said.

Ramirez, a 23-year-old native of Willis, Texas, also had a lighter side and joked around a lot, but he will most likely be remembered for his strong leadership, Staff Sgt. Michael J. Stewart said. He had known Ramirez since the unit&#8217;s first Iraq rotation, and watched Ramirez grow from a regular soldier into a professional noncommissioned officer, he said.

Before the unit headed to Iraq, Ramirez&#8217;s skills as a leader were on display when his squad won the Sapper Stakes, a competition that tests the skill and ingenuity of Army engineers, commonly referred to as &#8220;sappers.&#8221;

Ramirez was also a family man. While on leave in February he married his girlfriend of a year, Sy, a sergeant who is also a member of the 40th Engineers.

Sy Ramirez is expecting the couple&#8217;s first child, a daughter.