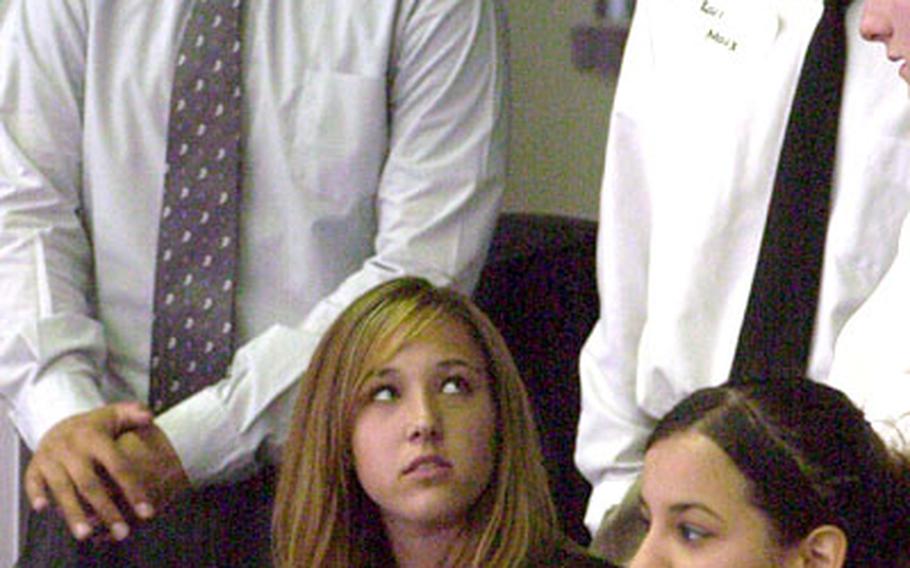 Caitlin Baker, seated left, who portrayed Adolf Hitler in Baumholder High School’s “Power of One” debates, looked to see which fellow historical figures lined up behind her as the final voting began on Thursday. With her, from left, are Winston Churchill (Clayton Eng), Karl Marx (Andrew Oppliger) and Pablo Picasso (Yasemin Johnson). (Terry Boyd / S&S)

Caitlin Baker, seated left, who portrayed Adolf Hitler in Baumholder High School’s “Power of One” debates, looked to see which fellow historical figures lined up behind her as the final voting began on Thursday. With her, from left, are Winston Churchill (Clayton Eng), Karl Marx (Andrew Oppliger) and Pablo Picasso (Yasemin Johnson). (Terry Boyd / S&S) Heidi Kretz worried that the "Power of One" project might not hold students&#39; attention. Instead, she and her sophomores&#39; enthusiasm never lagged as they spent all day Thursday debating the power quotients of 21 major historical players from Hitler to Einstein. (Terry Boyd / S&S) 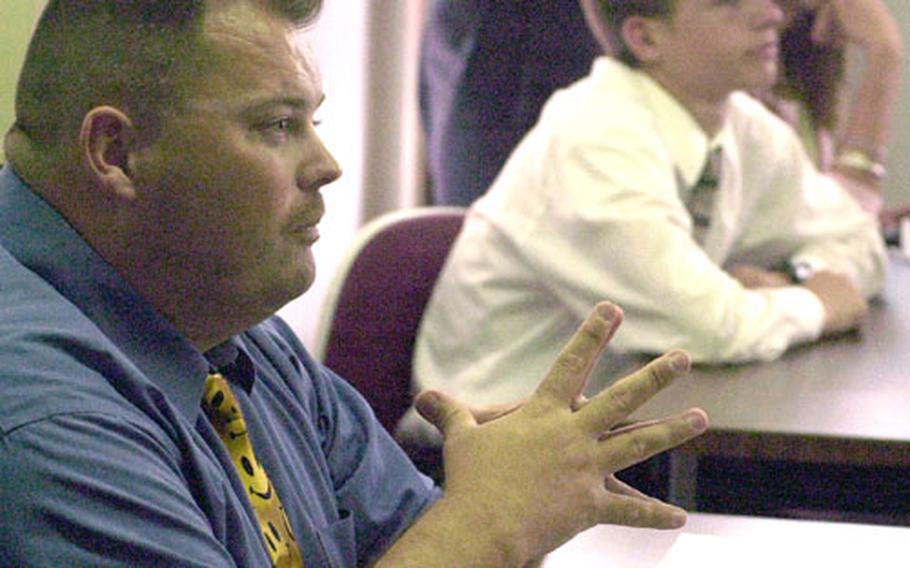 The outcome of the "Power of One Project" was a surprise for teacher Carter Hollenbeck, left. (Terry Boyd / S&S)

BAUMHOLDER, Germany &#8212; In the event you&#8217;ve ever wondered who has had the greatest impact on history, it turns out to be Adolf Hitler.

If that&#8217;s a disconcerting thought, then take solace in this: Hitler never really wanted to be Hitler. She wanted to be either Jesus of Nazareth or Walt Disney.

But once she took the Hitler role for her class &#8220;Power of One&#8221; project, Caitlin Baker did the best job of convincing her fellow Baumholder High School students not just that Hitler had the most impact on world history as an individual, but that he used his power to the fullest extent.

Fellow students may be familiar with other historical figures, &#8220;but when they hear my name, they actually feel something,&#8221; she said.

But in the final vote, Hitler&#8217;s name symbolized power, prevailing over everyone from Charlemagne to Oprah Winfrey as researched and portrayed by 21 sophomores drawn from Carter Hollenbeck&#8217;s honors world history class, and Heidi Kretz&#8217;s honors literature class.

&#8220;The Power of One: Movers and Shakers&#8221; conference on Thursday was the culmination of the year-long project, not to mention 30 percent of the grade for the two classes.

The Department of Defense Dependents Schools-designed &#8220;Power of One&#8221; project is meant to push sophomores to research and analyze, then synthesize all they learned over an entire school year into presentations and debates. And ultimately they had to define power and greatness, and decide if there can be one without the other.

Religious figures &#8212; Jesus, Muhammad and others &#8212; were omitted for several reasons including the lack of primary sources, and to keep students from using one text &#8212; the Quran or Bible &#8212; for all research, Hollenbeck and Kretz said.

On Thursday, teenagers seemed more like collegians, delving into some of Western civilization&#8217;s most treacherous philosophical mires.

If Eleanor Roosevelt was the power behind Franklin Roosevelt, then was she responsible for Hiroshima, asked James Dickerson, whose role was Harry S. Truman.

If Eleanor Roosevelt was so powerful, how come she didn&#8217;t end segregation, asked Latoya Bess as Rosa Parks.

But it came down to this:

The outcome wasn&#8217;t at all what Hollenbeck expected.

&#8220;It&#8217;s going to be in Stars and Stripes that Hitler won in Baumholder,&#8221; he said mostly to himself, savoring the irony of such a conclusion on an American Army base that was created by Hitler.

Such an outcome was unthinkable when he was a student 18 years ago at Bitburg, Hollenbeck told the class. &#8220;Twenty five or thirty years ago, Hitler wouldn&#8217;t have been mentioned,&#8221; he said.

But the most shocking outcome for the teachers was that the project exceeded their wildest expectations. When DODDS introduced the program, she and Hollenbeck were skeptical, Kretz said.