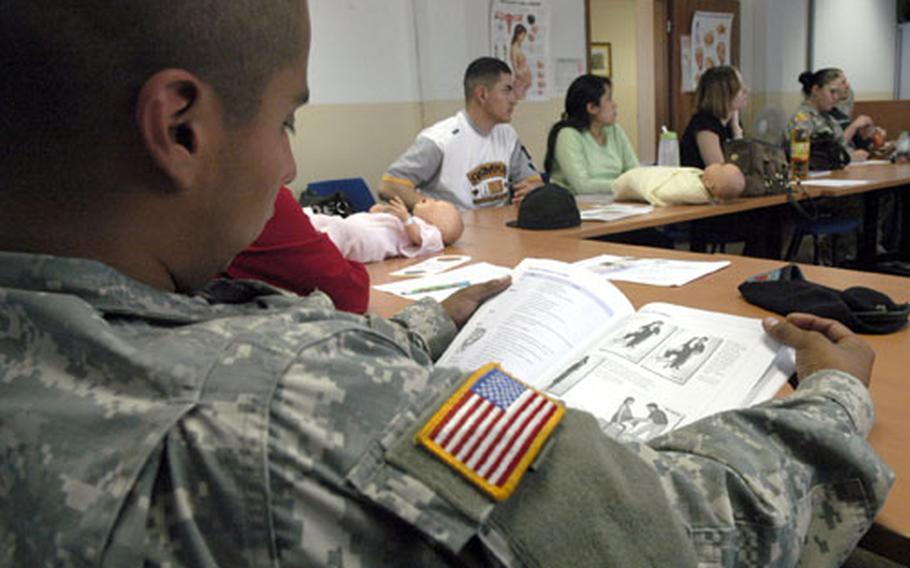 Pfc. Victor Ruiz, an expecting father enrolled in Baumholder&#39;s new parents course, studies up on what to expect during his wife&#39;s delivery. (John Vandiver / S&S)

Pfc. Victor Ruiz, an expecting father enrolled in Baumholder&#39;s new parents course, studies up on what to expect during his wife&#39;s delivery. (John Vandiver / S&S) Spc. Josh Butler and wife Tosha watch a presentation on the delivery of a baby at a workshop in Baumholder, Germany. (John Vandiver / S&S)

BAUMHOLDER, Germany &#8212; The women pour into the health clinic here on a daily basis, bearing news of positive home pregnancy tests and seeking validation from a Baumholder nurse.

Jones, a witness to the steady flow of hopeful couples who come through the door, said during the last couple of months roughly 300 pregnancies have been reported in Baumholder.

This latest baby surge, connected in part to the 2006 return of the 2nd Brigade, 1st Armored Division from Iraq, translates into packed classes at Army Community Service parenting programs. The soon-to-be moms and dads learn about everything from what to expect during delivery to breast-feeding and nutrition.

On Wednesday, a roomful of expecting first-time moms learned one thing they should anticipate is a lengthy delivery. More than 24 hours isn&#8217;t unusual, instructor Wendy Gandee explained.

&#8220;First babies usually take longer,&#8221; Gandee told her students, some of whom gasped under their breath.

ACS also launched a new program this month called Baby Link, which aims to connect expecting moms with other Baumholder mothers who have recently given birth.

&#8220;This is so we can offer as much support as we can,&#8221; said Silvia Emond, an ACS staffer who works with expecting parents.

So far, officials at ACS and the Baumholder Health Clinic say they&#8217;re absorbing the demand for services. The trickiest part is penciling in all the newborns for their various checkups.

Because of the pregnancy spike, some women have been diverted from Landstuhl Regional Medical Center to German hospitals for delivery. The practice is not unusual during a boom.

So far this year, 28 Baumholder women have delivered babies on the economy and another 46 are scheduled for deliveries in German hospitals through February, Jones said. Tours of German hospitals and pre-delivery meetings are provided to those diverted from Landstuhl.

Periodic pregnancy spikes are nothing new in Baumholder. In fact, the current situation resembles what happened here in 2004 when soldiers of the 2nd Brigade Combat Team, 1st AD returned home from Iraq. The result was a record number of births in 2005.

A similar scenario is playing out again. Births are expected to peak in January with 45 to 50 babies due, Jones said.

But the increase can&#8217;t all be explained as a byproduct of deployment, Emond noted. Lots of soldiers and spouses are new to the brigade and Baumholder, she said.

&#8220;We have new spouses coming in pregnant. It could be people are just excited about babies,&#8221; Emond said.