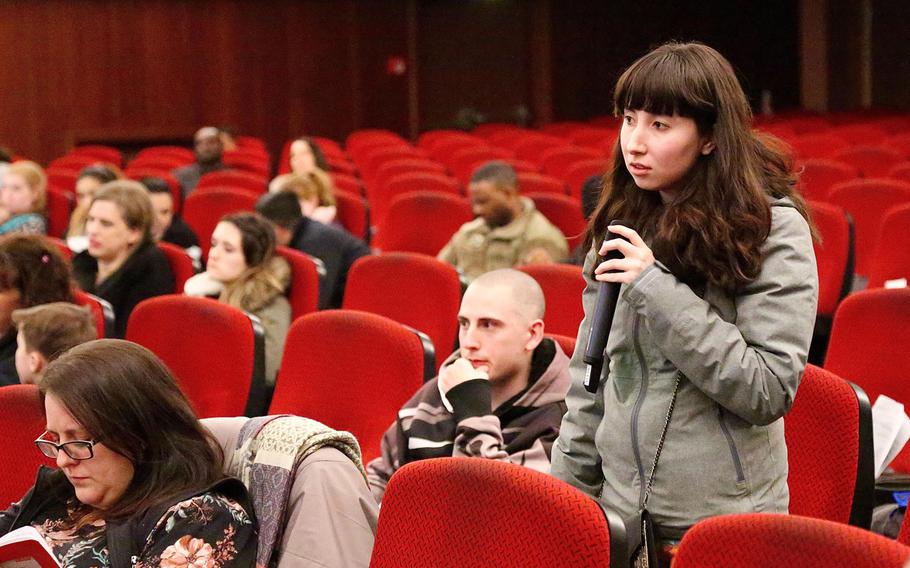 Buy Photo
An Army spouse asks post officials in Baumholder, Germany, to identify what the unidentified solid flecks are in the water at the family housing units on post, during a town hall meeting at Smith Barracks on Tuesday, March 20, 2018. (Will Morris/Stars and Stripes)

Buy Photo
An Army spouse asks post officials in Baumholder, Germany, to identify what the unidentified solid flecks are in the water at the family housing units on post, during a town hall meeting at Smith Barracks on Tuesday, March 20, 2018. (Will Morris/Stars and Stripes) 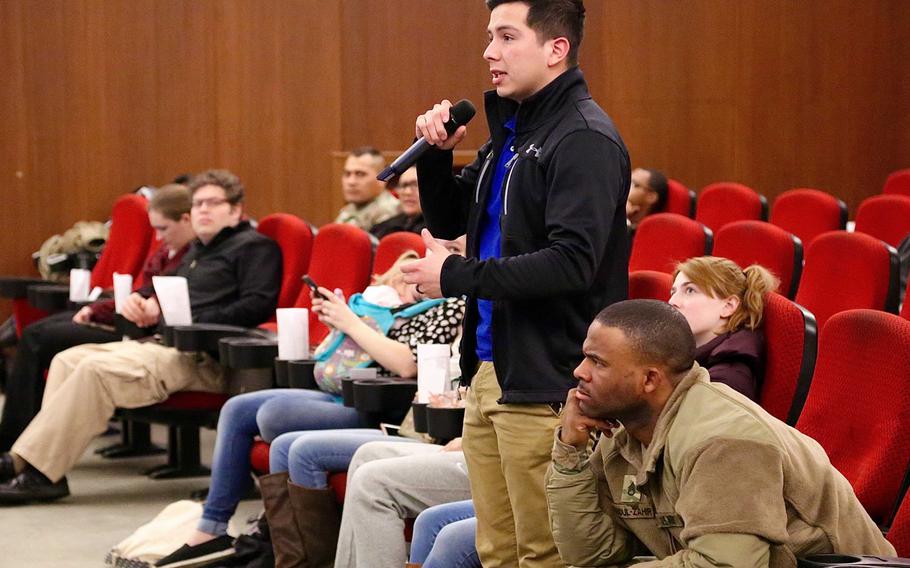 Buy Photo
A soldier asks questions during a town hall meeting held at Smith Barracks in Baumholder, Germany on Tuesday, March 20, 2018. (Will Morris/Stars and Stripes) 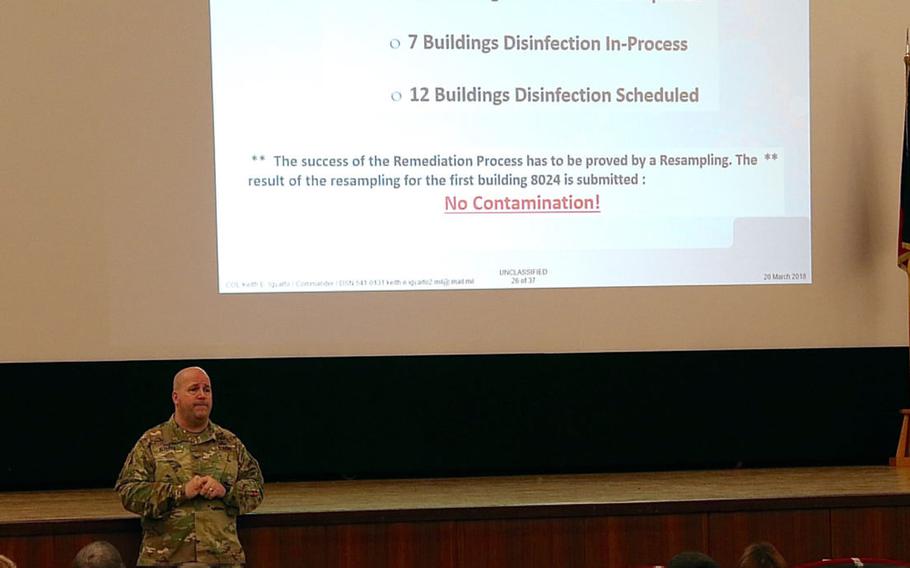 BAUMHOLDER, Germany — The Army will test homes with brown-colored water for safety and move residents suffering from related health issues, garrison officials said this week after community concerns over detection of Legionella bacteria in water pipes.

After weeks of heated online discussions about tainted water, mold, mildew, sewage problems and other issues in base family housing, soldiers and dependents stationed at Baumholder described their living conditions to U.S. Army Garrison Rheinland-Pfalz leaders Tuesday night at a town hall meeting on base.

Garrison Commander Col. Keith Igyarto listened to soldiers and family members describe the colored water their families drink and are forced to use to bathe.

Igyarto responded as he has at other times -- saying the water is safe -- and outlined testing methods used on base to ensure clean water.

Igyarto said the solution is for residents to run the water until it is clear before they drink it.

“What I am telling you is, that it is perfectly safe,” he said. “But don’t drink it because it’s going to taste nasty, flush it out.

“If you are concerned, you’ve got sick kids and all the sudden they are breaking out in rashes, let us come in and test your water. Take your kids to the clinic and have them tested,” Igyarto said, and if there is a problem, “we’ll move you out.”

Many of the housing units on Baumholder were constructed in the 1950s. Several residents at the meeting said they spend $50 a month for water delivery because the building water is unsuitable for cooking and drinking.

Positive readings were later found at a military hospital in Landstuhl in two areas, though in both cases officials stressed that no one has tested positive for the illness, a severe form of pneumonia, in at least 10 years at the military’s Europe facilities. The tests began this year after a German mandate.

Social media sites erupted with criticism about how the Army was addressing the bacteria problem, the water and quality-of-life issues in the housing units.

Igyarto said he empathizes with those living in family housing.

“I share your pain, I share your frustrations, we’ll do everything we can,” he said. “But what I don’t want you to do is leave here thinking that one, we’re covering something up … secondly, if you’ve got a problem, let us know.”

Army spouse Katrina Shepard said she believed that the leadership was listening, but like many others at the meeting, she is waiting to see whether the conditions change.

Since moving to Baumholder, her 4-year-old daughter has suffered from numerous skin conditions, which she believes are caused by the water in her apartment. She is currently waiting on test results.

“It seems like they have taken a lot of initiative to find out what is bothering people ... and work on things to fix them,” Shepard said. “I think they have a greater understanding of what is going on now.” Igyarto “seemed genuinely shocked about some of the things people were saying.”