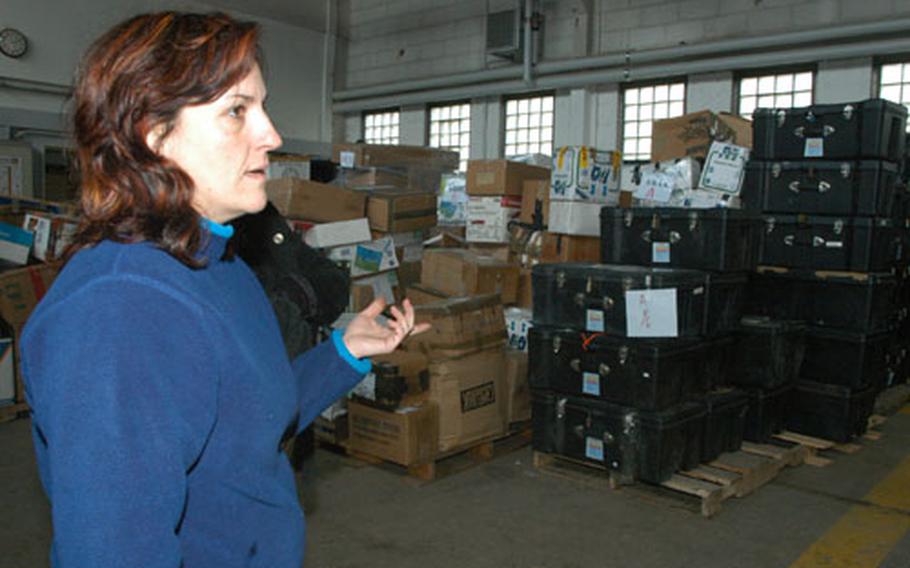 BAUMHOLDER, Germany &#8212; Maintenance hangars at the 1st Battalion, 35th Armor Regiment&#8217;s motor pool are full of gear mailed several weeks ago by soldiers who were expecting to come home.

As they neared what they thought was the end of a yearlong deployment, troops started to mail boxes and footlockers home, said Baumholder community mail supervisor Idalia Leza.

But the Defense Department announced April 15 that 1st Armored Division troops would stay in the Middle East for an additional 120 days, meaning dusty packages &#8212; sometimes nothing more than discarded cardboard boxes wrapped with green duct tape &#8212; wait for their owners to return.

One soldier from the 4th Battalion, 27th Field Artillery Regiment, packed DVDs, magazines and his Xbox video game, into a box with his blanket.

There are a lot of televisions. Atop the tall stacks of boxes rests a rolled Asian carpet. One box held dumbbells. Another had a soldier&#8217;s workout uniform.

Trailers full of deployed soldiers&#8217; bulk mail began arriving in mid-March. By early April it was common for up to three trailers to arrive each week, Leza said. She and her staff sorted the heavy boxes and stacked them by unit.

In late March, the 1st Armored Division&#8217;s postal company in Iraq advised the command to halt mail flow to Old Ironsides troops, expecting them to be departing within weeks. Rear detachment commanders and community support groups spread the word to spouses.

In early April, outgoing mail from Baumholder began to trickle off. But the mailroom never turned away outgoing mail, said Sgt. Stephanie Lee, of the 90th Postal Company.

Since the official word came down in mid-April, the outgoing mail has picked up, Lee said. From the customs labels, mailroom workers can see that families are sending mostly nonperishable foods, Lee said. Spouses are dropping off a lot of packages, she said. &#8220;One woman came in with 10 boxes,&#8221; Lee said. &#8220;Her husband had requested things for him and his soldiers.&#8221;