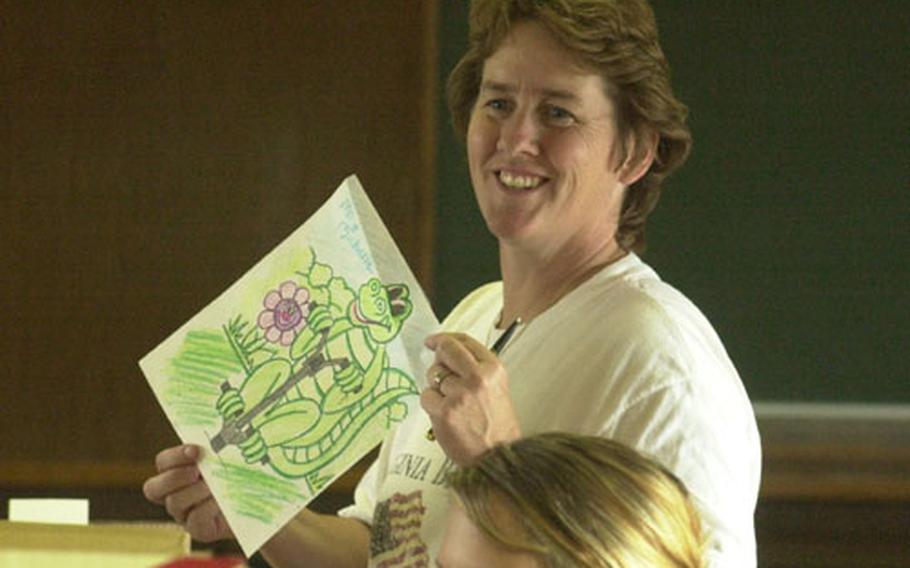 Along with socks, anti-perspirant and toilet paper, Erin Kantor included artwork from Baumholder children in the packages she put together for single soldiers. (Terry Boyd / S&S)

BAUMHOLDER, Germany &#8212; When Spc. Dennis Patric opened a box of toiletries and goodies early last month, he was amazed to find it had come all the way to Baghdad from the Sunshine Grill.

So the soldier sat right down and wrote a letter to his benefactor Steffanie M&#252;ller, who owns the little eatery just outside H.D. Smith Barracks where Patric&#8217;s assigned to Company Bravo, 2nd Battalion, 6th Infantry Regiment of the 1st Armored Division:

&#8220;I was surprised when I opened the box and see the package was from the Sunshine Grill. I eat at your place all the time! I was very fortunate to get a package from you because I really needed help.&#8221;

Last Friday, M&#252;ller stood at the Sunshine Grill counter holding the letter along with the picture Patric enclosed of himself posing with a confiscated AK-47 assault rifle in each hand, and surrounded by weapons his unit had seized on raids. Clearly moved, M&#252;ller talked about how she had donated 20 packages of personal items &#8212; everything from toilet paper to toothpaste &#8212; as part of one of several local efforts to support American soldiers.

Patric was one of the first recipients of an ad hoc effort to take care of single American soldiers downrange. But he was not the first to feel Baumholder&#8217;s embrace.

When German demonstrators arrived last winter at the base gates from out of town to protest U.S. involvement in Iraq, Baumholder&#8217;s business leaders organized a counter demonstration.

Now, with Baumholder&#8217;s troops deployed since May, that solidarity continues through random acts of kindness.

One of the main efforts is a two-month collaboration between 1st AD spouses and Baumholder business owners, spearheaded by restaurateur M&#252;ller&#8217;s sister-in-law, Sigrid Zimmer, owner of Hotel Berghof. The cash and donations Zimmer and company have collected resulted in toiletries and personal items going to 200 soldiers in all Baumholder-based units so far.

That effort started when Tina Olson, battalion co-leader for the 2nd Battalion, 6th Infantry Regiment Family Readiness Group, said she promised her husband&#8217;s soldiers &#8220;we&#8217;d take care of them. If they needed anything, they could tell him or they could write me.&#8221;

Last Thursday afternoon, Olson, Carrillo, Zimmer and others took inventory and boxed up donations, said Erin Kantor, a 1st AD spouse who helped parcel out toilet paper to each packer.

It is perhaps the most ambitious of multiple, unrelated projects, said Bernd Mai, spokesman for the 222nd Base Support Battalion. Mai&#8217;s cited a number of efforts including:

&#8226; An early July trip for 50 spouses and children to an indoor swimming facility in Hambactal with transportation organized by Baumholder-based District Mayor Volker Pees.&#8226; A July 30 sightseeing trip organized by the lord mayor of nearby Idar-Oberstein, Hans Jurgen Machweirth, for 50 Americans from Baumholder.&#8226; A trip Friday to the Dino Park outside Kaiserslautern. The district administration of Baumholder picked up transportation costs and entry fees for 50 Americans.&#8226; A sightseeing trip planned for Aug. 28 to Trier, Germany&#8217;s oldest city.

The German effort to rally support seems to already be paying off in closer ties between base and town, not to mention greater loyalty to local businesses.

But it would be easy &#8212; and wrong &#8212; to dismiss German support for U.S. troops downrange as commercially motivated, Zimmer said. Close ties between Germans and American soldiers and their families have been a local tradition for more than 50 years, Zimmer said, and they just keep getting stronger.

Pitching in for troops

&#8226; Local television stations and newspapers have picked up the Baumholder story, and that coverage has added to the momentum. A television news segment inspired 81-year-old Irmgard Wahl, of Heimbach, to call Sigrid Zimmer with a donation.