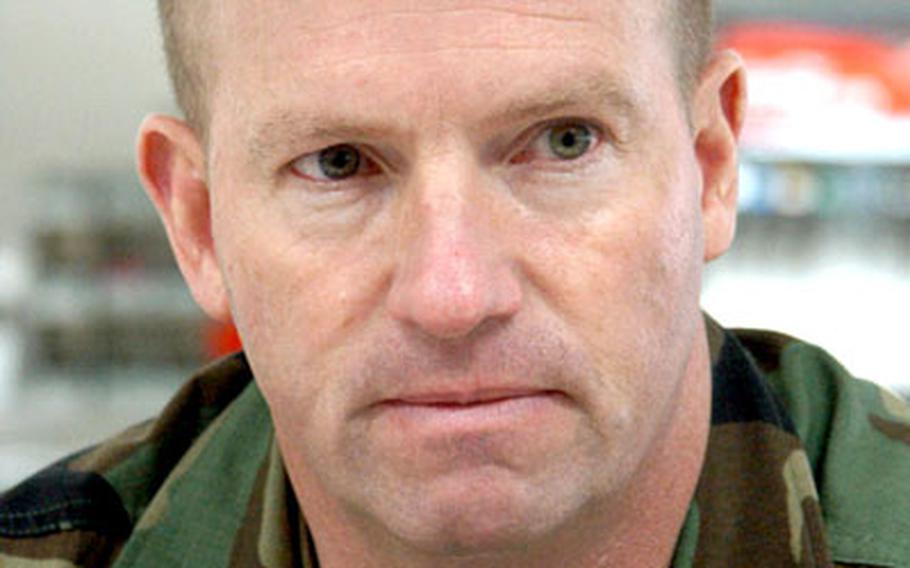 BAUMHOLDER, Germany &#8212; The weather fit the mood of many who attended Wednesday&#8217;s memorial service for the eight Baumholder soldiers who died together last week in a suicide attack south of Baghdad.

Given the circumstances, the gray blanket above probably seemed appropriate to those tucked into Good Samaritan Chapel.

The soldiers, seven members of the same platoon and an Army medic assigned to the unit, were preparing to come home last month when the Defense Department extended their tour in Iraq. The increase in violence that led to their extension brought an abrupt end to their lives.

&#8220;The reason they were kept down there was because they were needed,&#8221; said Sgt. Major of the Army Kenneth Preston, who attended the service.

Preston knows the battalion well, having spent much of the past year in Iraq, where he lived and worked on the same compound as the unit. At the time, Preston was the command sergeant major for V Corps.

When the deployment extension was announced last month, Preston said he heard no one in the battalion pitched a fit.

At least a couple hundred people, including scores of military spouses from the community, attended Wednesday&#8217;s memorial service. The church was so crowded that attendees stood in the side aisles and along the back wall. Even the choir loft was full, according to Madeleine Dwoiakowski, spokeswoman for the 222nd Base Support Battalion.

The 1st AD closed the service to members of the media, citing command and family concerns regarding privacy.

Among those in attendance were a number of local German officials.

&#8220;For us, it makes no difference they were American soldiers,&#8221; German army Lt. Col. Juergen Muhr, the local garrison commander, said as he stood outside the church. &#8220;We feel the same as if they were in the German army. We are very sad about what happened.&#8221;

The soldiers died April 29 when a car packed with explosives blew up as the soldiers provided security along a stretch of road south of Baghdad. Four other soldiers in the unit were injured in the attack.

Standing outside the church were four Baumholder soldiers in their desert fatigues. The four returned from Iraq earlier this year, but were recently told their unit would be heading back.