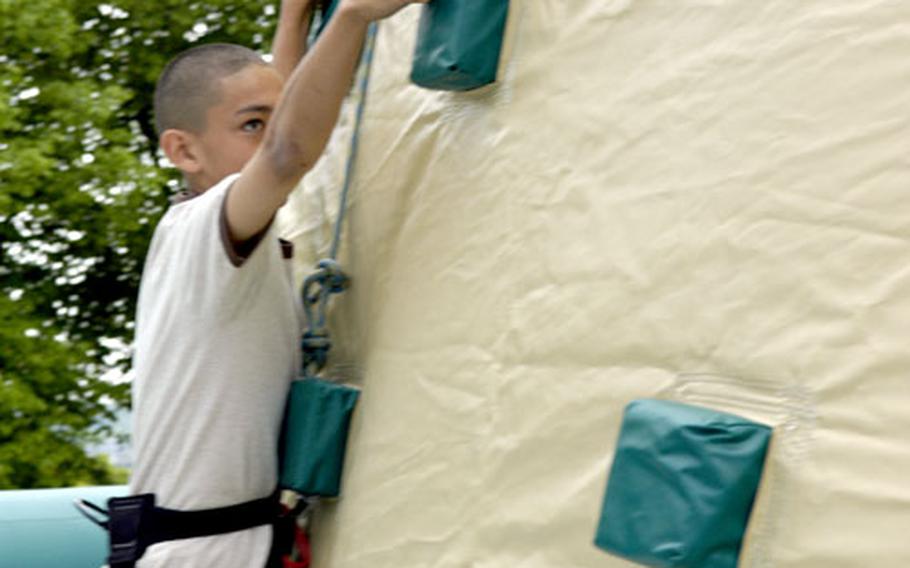 Avery Vasquez, 13, climbs an inflatable cliff, which was one of many amusements offered up to raise scholarship money for Baumholder High School seniors at the 16th Annual Buc Night. (John Vandiver / S&S)

Avery Vasquez, 13, climbs an inflatable cliff, which was one of many amusements offered up to raise scholarship money for Baumholder High School seniors at the 16th Annual Buc Night. (John Vandiver / S&S) Ryan Horton, 18, gets wet for a cause as he is dropped into a pool of water at a dunking booth during the 16th Annual Buc Night. (John Vandiver / S&S)

BAUMHOLDER, Germany &#8212; Lawanda Cooper did it for all the wives out there whose husbands hog the remote control.

Just about everything was up for bid. A slew of colonels stood on stage, where they were victimized with pies for a price. Sports memorabilia was raffled off in an endless stream. Then there were the big-ticket items, which were auctioned off in bidding wars.

By the end of the night, $30,000 was raised. After expenses, there should be about $25,000 available to help the high school graduates with their college tuition, said Jackie Wilmot, co-chairwoman of the event.

For many of the seniors, the support from the Baumholder community is an important financial boost.

&#8220;Tuition is high these days and I want to help out my parents,&#8221; said senior Dequinton McCoy, who will be attending Lamar University in Texas.

&#8220;It makes a difference,&#8221; added fellow senior Derek Mundt, who will attend the University of Dubuque in Iowa.

The money raised is a point of pride for Baumholder&#8217;s tight-knit military community. Hundreds of people roamed around the garrison&#8217;s Rheinland Convention Center, where there was a country fair atmosphere. Amusements, cotton candy and barbecue were served up while prospective bidders examined some of the items that would be auctioned off later in the evening.

A gourmet Italian dinner at the home of Lt. Col. Derek Rountree, the garrison commander, was auctioned off for nearly $2,000. When Rountree offered to serve dinner twice, an additional $1,700 bid was made.

One item that got a lot of attention was a voucher for two nights at a bed and breakfast in Ireland. Courtesy of the 1st Battalion, 35th Armor Regiment, the package came with plane tickets and a healthy supply of Irish whiskey. It eventually went for $1,250.