Baumholder community honors two of its soldiers killed in Iraq 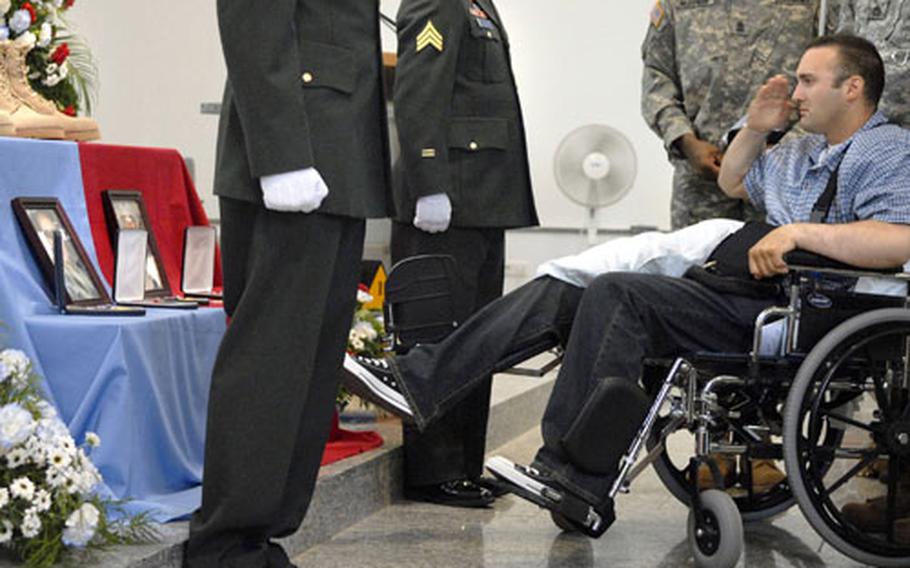 Army Cpl. Joseph Browning, assigned to 2nd Battalion, 6th Infantry Regiment, honors Capt. Gregory Dalessio and Pfc. Bryan Thomas during a memorial ceremony Tuesday at a chapel in Baumholder. Browning, two other soldiers and a civilian were wounded during the same attack that killed Dalessio and Thomas in Salman Pak, Iraq, outside of Baghdad. (Ben Bloker / S&S)

Army Cpl. Joseph Browning, assigned to 2nd Battalion, 6th Infantry Regiment, honors Capt. Gregory Dalessio and Pfc. Bryan Thomas during a memorial ceremony Tuesday at a chapel in Baumholder. Browning, two other soldiers and a civilian were wounded during the same attack that killed Dalessio and Thomas in Salman Pak, Iraq, outside of Baghdad. (Ben Bloker / S&S) The echo of volleys rings out during a memorial ceremony for Capt. Gregory Dalessio, and Pfc. Bryan Thomas Tuesday at a chapel in Baumholder. (Ben Bloker / S&S)

BAUMHOLDER, Germany &#8212; Capt. Gregory T. Dalessio and Pfc. Bryan Thomas came from different backgrounds, grew up in different parts of the country and had different personalities.

But soldiers remembered them as brothers at a memorial ceremony on Tuesday at the base&#8217;s chapel.

Both men met the same tragic fate on their deployment to Iraq. The soldiers from the Baumholder-based 2nd Battalion, 6th Infantry Regiment died last week in an attack south of Baghdad.

Lt. Col. R. Raymond Rigsby, the unit&#8217;s rear detachment commander, lauded both men as heroes and urged those who attended the packed service at the base chapel to remember them this Fourth of July weekend and always.

"Captain Dalessio and Pfc. Thomas&#8217; sacrifice is a testament to our heritage and what this country stands for no matter how heavy of a price," he said. "They will always be remembered as history will ensure we never forget."

The Baumholder unit is just a couple months into what is expected to be a 15-month deployment to Iraq. Dalessio and Thomas are the first soldiers to die while on the deployment.

Dalessio, 32, grew up in Cherry Hill, N.J., received his commission in 2004, earned a master&#8217;s degree in foreign affairs and served as the battalion&#8217;s civil affairs officer.

Thomas, 22, called Lake Charles, La., home, enlisted in the Army about two years ago and served as a military vehicle driver. He is survived by his daughter and his fiancee, who is more than seven months pregnant.

Both were part of the Personal Security Detachment.

They were killed after attending a council meeting in Salman Pak on June 23. The attack has been blamed on a former Iraqi council member, who was later killed during the ensuing exchange of gunfire. Three soldiers were wounded along with a civilian interpreter. One of those injured in the attack, Cpl. Joseph Browning, attended the ceremony in a wheelchair. After the ceremony, he joined the dozens of soldiers who went up to the altar to pay their respects with one final salute.

Some soldiers read memorial tributes from their comrades, who remain deployed and could not attend the service.

First Lt. Gary Flowers II, who served in Iraq the last time the unit deployed, described Dalessio as an extremely bright, straight-forward guy with a sense of humor. The captain, who rocked to U2 and Bruce Springsteen, also was a profound "smack talker" who made friends easily within the unit.

"He took everything in all good fun," Flowers said after the ceremony. "He truly had a good heart. He never allowed work to mean more than his friends."

In a message read at the ceremony, Pvt. Thomas Montgomery said his friend Thomas was "kind-hearted."