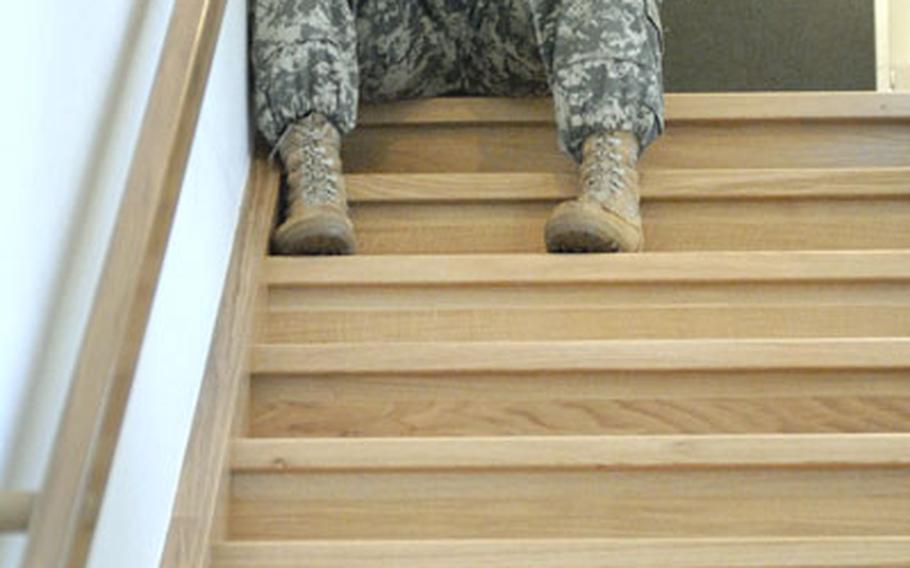 A soldier at the rear of the Baumholder chapel reflects upon the loss of Staff Sgt. Jose A. Lanzarin and Pfc. Shane R. Austin during a memorial ceremony Thursday. Lanzarin and Austin were killed during combat patrols almost a week apart in Ramadi, Iraq. (Ben Bloker / S&S)

A soldier at the rear of the Baumholder chapel reflects upon the loss of Staff Sgt. Jose A. Lanzarin and Pfc. Shane R. Austin during a memorial ceremony Thursday. Lanzarin and Austin were killed during combat patrols almost a week apart in Ramadi, Iraq. (Ben Bloker / S&S) 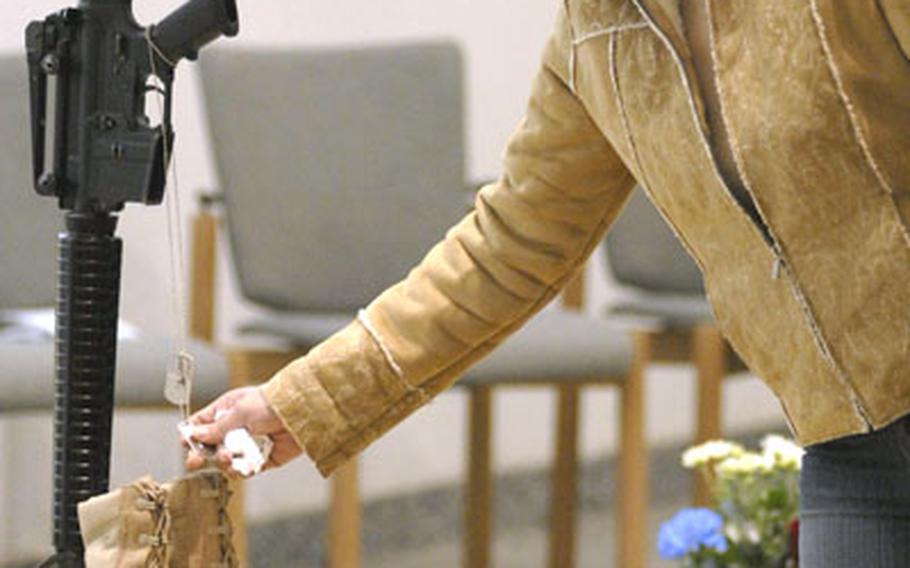 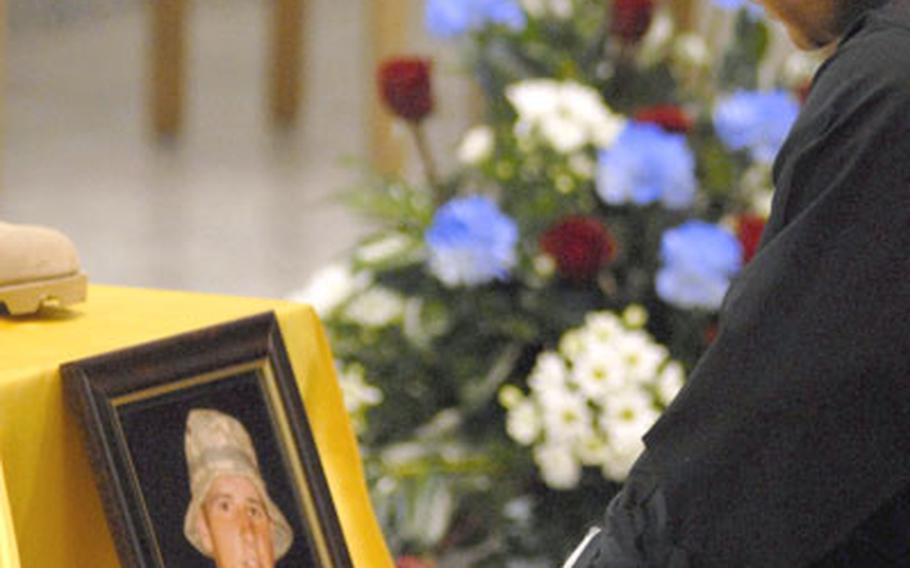 Sgt. Eka Eka, the supervisor of Pfc. Shane Austin, reflects on the loss of his solder during Thursday&#39;s memorial ceremony held at the Baumholder chapel. (Ben Bloker / S&S)

BAUMHOLDER, Germany &#8212; Soldiers, family members and friends filled the Good Samaritan Chapel on Wednesday afternoon to pay their respects to a pair of fallen warriors.

Lanzarin, 28, of Del Rio, Texas, was killed in Ramadi, Iraq, on Sept. 26, when a roadside bomb detonated near his vehicle during combat operations, according to a Department of Defense news release. Lanzarin was assigned to the 2nd Battalion, 6th Infantry Regiment out of Baumholder.

Austin, 19, of Edgerton, Kan., died Oct. 8 in Ramadi from injuries suffered by enemy grenade fire, according to a DOD news release. He was assigned to the 1st Battalion, 35th Armor Regiment, also out of Baumholder.

In addition to a memorable smile, Lanzarin will be remembered for his motivation and care for others shining through his tough exterior, said Capt. Marvin King, 2nd Battalion, 6th Infantry Regiment rear detachment commander.

&#8220;[Lanzarin] would share with you his life, the love he had for his wife or the little things that he enjoyed &#8212; from his car to cooking,&#8221; King said. &#8220;He knew how to break through any personality and talk straight from the heart &#8212; to relate to how you could be grateful for all the great things in your life by telling you about what he was grateful for in his.&#8221;

Austin enlisted in January, following a family tradition of military service. He was assigned to Baumholder after basic and advanced individual training. He arrived in Iraq in August following completion of individual readiness training.

&#8220;Shane was a quiet, unassuming man who worked hard &#8212; whether it was cutting grass in rear detachment or conducting maintenance on his tank,&#8221; said Capt. Daniel Costin, 1st Battalion, 35th Armor Regiment rear detachment commander. &#8220;Shane was a soldier. He wore his uniform with pride because he knew what it meant to be a soldier. He knew that this uniform represented something good and that he was part of a legacy of men and women who have protected what is good and right in this world.&#8221;

Whatever the future holds, the current Baumholder community will always be bound by a common thread that knows both good and bad times, said Maj. Jeanine White, 2nd BCT rear detachment commander.

&#8220;It is not for me to say or define my thoughts of what is good or bad, just to note that the one thread which will always bind us are the memories we have of Baumholder and the fallen heroes we honor as a community,&#8221; she said.

Lanzarin, a soldier since 1997, was posthumously awarded the Bronze Star Medal, Purple Heart and the Army Good Conduct Medal, which was his fourth. Lanzarin is survived by his wife, Sandra, of Idar-Oberstein, Germany; his parents, Antonio and Sylvia; two sisters and a brother.

Austin was posthumously awarded the Bronze Star, Purple Heart, Good Conduct Medal, the Overseas Service Ribbon and the Combat Action Badge. He is survived by his parents, Terrance and Debra; and two brothers.