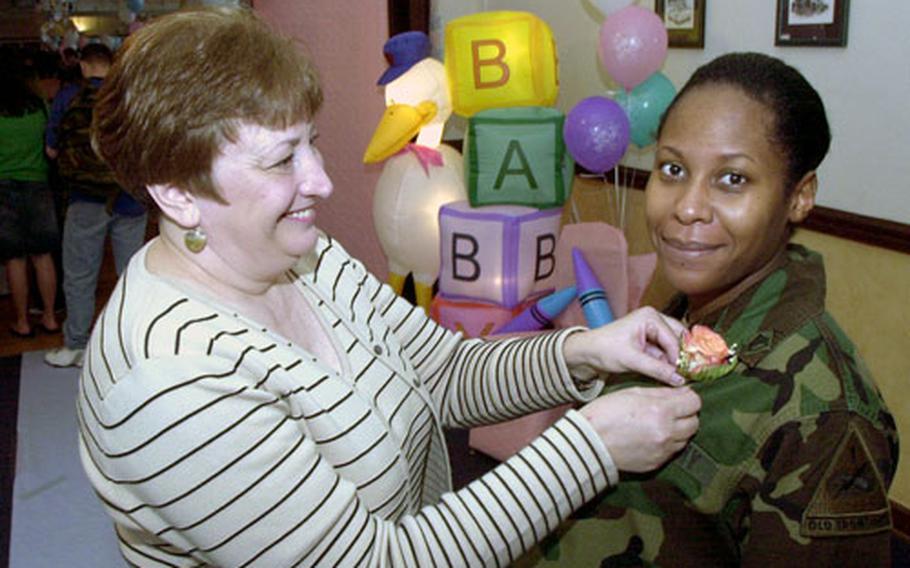 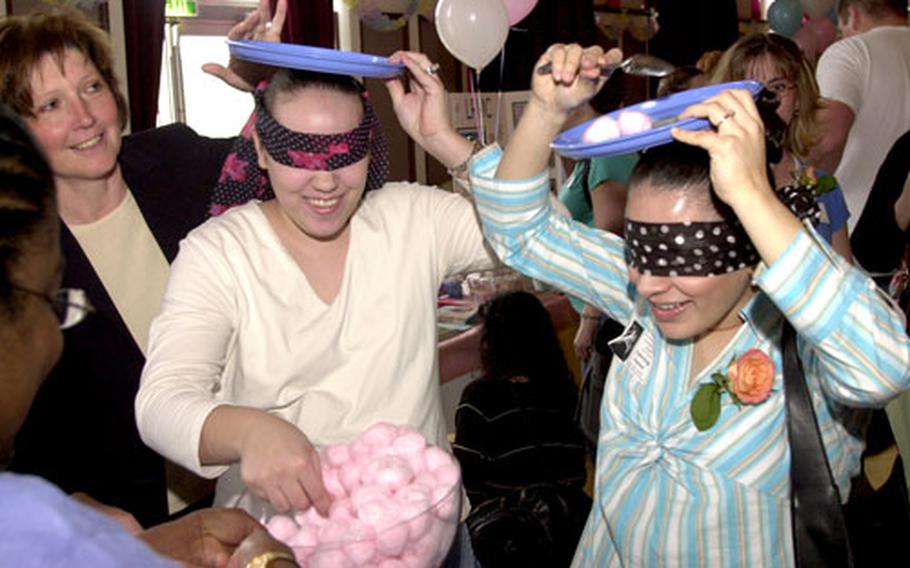 Carmen Dutton, right, raced Keri Kasper to see how many cotton puffs she could spoon from a bowl and put on a plate atop her head Monday during the Operation Iron Stork baby shower in Baumholder, Germany. (Terry Boyd / S&S)

BAUMHOLDER, Germany &#8212; It was pretty much like any other baby shower &#8212; goofy games, cake, fruit punch and lots of mom talk.

Except there were hundreds of pregnant women in battle dress uniforms or civvies milling about with men in tow, not to mention dozens of people at dozens of booths and displays giving away goodies, everything from strollers and bath-and-body sets to diaper bags and a new washer-and-dryer set.

And there were health care providers on hand with all sorts of information including graphic birth displays that, well, people didn&#8217;t talk too much about in the old days.

OK, it was really nothing like anyone has ever seen before as hundreds of expectant mothers and fathers packed Baumholder&#8217;s Rhinelander Community Center on Monday for the Operation Iron Stork baby shower. The mega-event was put together by Baumholder&#8217;s Army Community Service, the 222nd Base Support Battalion, senior spouses and other volunteers.

The shower had to be a big deal because this 1st Armored Division base just north of the Ramstein/Kaiserslautern complex is looking at the biggest baby boom anyone can remember. Typically, the base might have one or two births each month, said Lt. Col. Mike Money, chief nurse for the health clinic and family nurse practitioner. But health care personnel here estimate the birth rate will jump to 40 births per month during the next five months, with as many as 350 babies born by the end of the year, said Money, who came up with the &#8220;Iron Stork&#8221; tag for the shower.

Organizers knew they had a hit on their hands when they got 300 RSVPs, said Jean-Marie Williams, a contract ACS employee who organized the event and who oversees the New Parent Education and Support program. But by midmorning, Williams was expecting twice as many people to attend.

There are all sorts of possibilities to explain the boom. But Money and others are pretty certain that soldiers and spouses are making up for lost time after the 1st AD&#8217;s Iraq deployment from April 2003 to July 2004. And Baumholder, the largest combat arms base outside the United States, is home to a lot of young families.

Those factors are causing a ripple effect across the entire area, Money said. Baumholder&#8217;s clinic will have to get ready for 40 extra postpartum visits, 40 extra healthy baby visits and other care, he said. Clinic personnel, in turn, will coordinate with the BSB, which may have to add staff at the passport office, for example, Money said.

Landstuhl Regional Medical Center probably won&#8217;t be able to handle the Baumholder population explosion. So, many families will be directed to German hospitals in nearby Idar-Oberstein, Birkenfeld and Kusel, Money said. German hospitals &#8220;may look a little different, but technically the quality is the same&#8221; as American hospitals, he said.

Pfc. Courtney Johnson of the 47th Forward Support Battalion said that&#8217;s fine with her. Johnson came to the shower with her friend and fellow 47th FSB soldier Nicole Williams to talk to the German liaison about local hospitals. Not that there isn&#8217;t much she doesn&#8217;t already know, said Johnson, who had her appendix removed last month at a German hospital.

Williams, who will deliver at Landstuhl, came to the shower to talk to representatives at Landstuhl&#8217;s Mother/Baby Unit about her delivery, &#8220;about what happens in the whole process.&#8221;

Williams and Johnson rated the event much better than they expected, and by 11 a.m. the two had already taken bags of freebies to their car. Those freebies, such as diaper coupons, are important, they said.

She and her husband, Pvt. Joshua Johnson, a scout/medic with the 2nd Battalion, 6th Infantry Regiment, are both junior enlisted, &#8220;and everything is so expensive,&#8221; Courtney Johnson said.

For many far away from home, the Iron Stork baby shower may be the only one they get.