Charles Keller, 9, watches fellow summer camper Alex Marlow, 11, left, send his line soaring during a day out at the Baumholder Outdoor Recreation fishing pond Monday. Individuals or groups can fish for a flat rate of $10 for three fish. The man-made pond is just minutes from Baumholder and is stocked with trout. (Ben Bloker / S&S)

Charles Keller, 9, watches fellow summer camper Alex Marlow, 11, left, send his line soaring during a day out at the Baumholder Outdoor Recreation fishing pond Monday. Individuals or groups can fish for a flat rate of $10 for three fish. The man-made pond is just minutes from Baumholder and is stocked with trout. (Ben Bloker / S&S) Cody Robichaud, a summer camper from the Wetzel School Aid Service, reels in his line during a day of fishing at the Baumholder Outdoor Recreation fishing pond just off post Monday. (Ben Bloker / S&S) 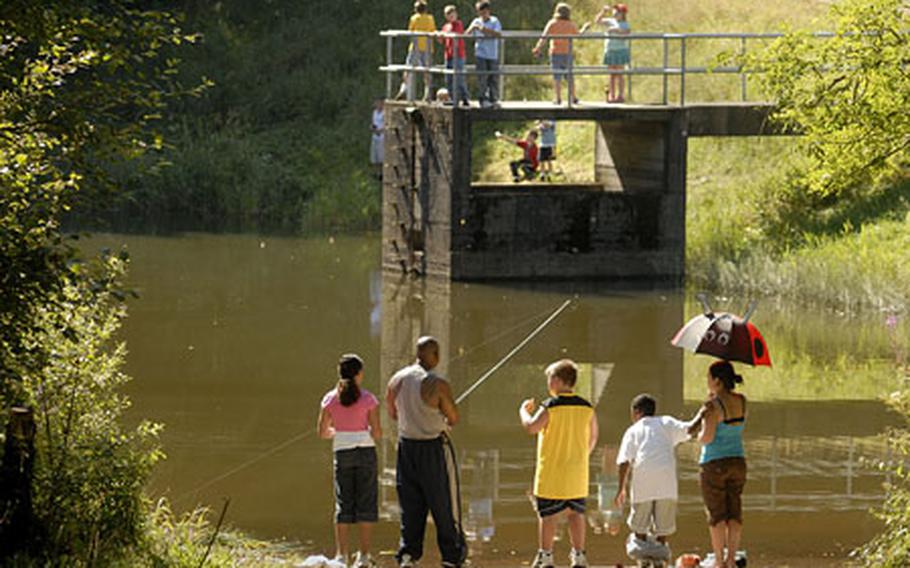 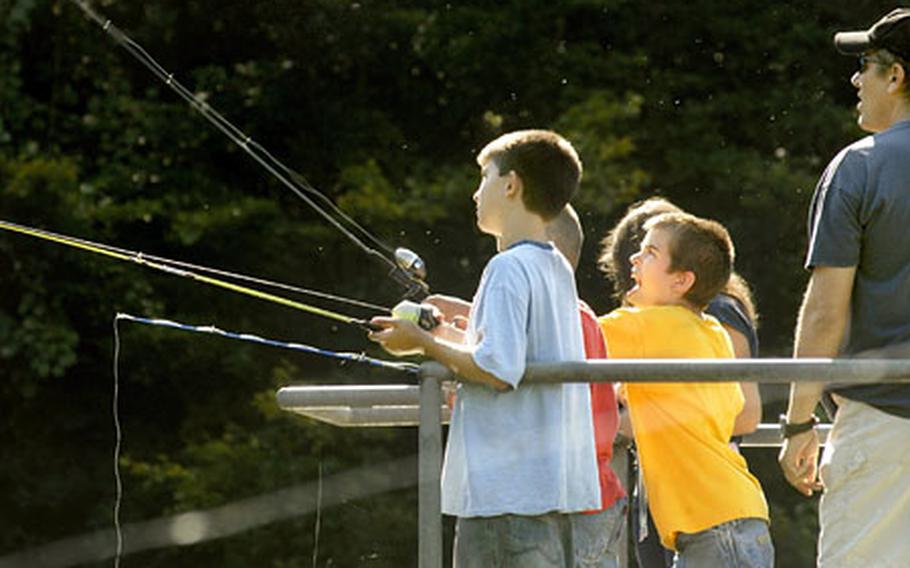 Charles Keller, 9, puts everything into a cast as Alex Marlow, 11, left, and Werner Graf, the director of Baumholder Outdoor Recreation, look on at the fishing pond Monday. (Ben Bloker / S&S)

BAUMHOLDER, Germany &#8212; Brennan Hall, 10, is no rookie when it comes to casting a line and reeling in the fish.

On Monday, she got the chance to test her skills at a man-made lake in Baumholder. The Army community can fish for trout there as part of the local outdoor recreation program.

She was the only one who caught a fish.

Hall was among the summer campers who cast corn-baited hooks at the pond, which is leased and stocked by the Army and about three miles from post.

The fishing program is just one of the fairly new offerings that have helped increase interest and participation in Baumholder Outdoor Recreation, according to program director Werner Graf.

Within the last two years, the Baumholder program has added fishing, a new paintball complex, and a new office where visitors can sit down for a meal and shop for an array of sporting equipment, Graf said. Several new staff members also have been added.

While outdoor recreation programs aren&#8217;t designed to be moneymakers, it&#8217;s becoming increasingly important to develop programs that are more self-sustaining, according to Installation Management Command.

And in the case of Baumholder, that has been particularly true.

A Web site, www.baumholderpaintball.com, which is unaffiliated with the Army, has sprung up to sing the praises of the facility.

In 2006, outdoor recreation in Europe received $1.6 million in appropriated fund support and generated $2.6 million in revenue, according to O&#8217;Sullivan. Expenses totaled $3.5 million.

In Baumholder, trout fishing is starting to catch on, according to Graf. No German fishing license is required, he said. Anglers must take a three-day course to land such a license.

Nonetheless, outdoor recreation offers a certification program to get the license for those wanting to venture beyond the man-made pond.

About every three months the pond is stocked with 50 kilograms worth of pan-sized trout, Graf said.

Permits cost $10 for a catch limit of three trout and $15 for five.