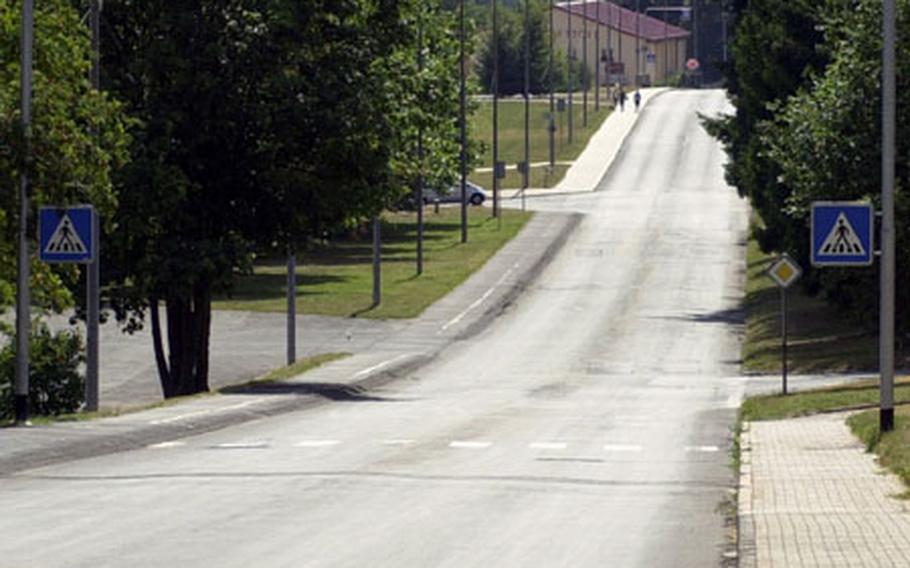 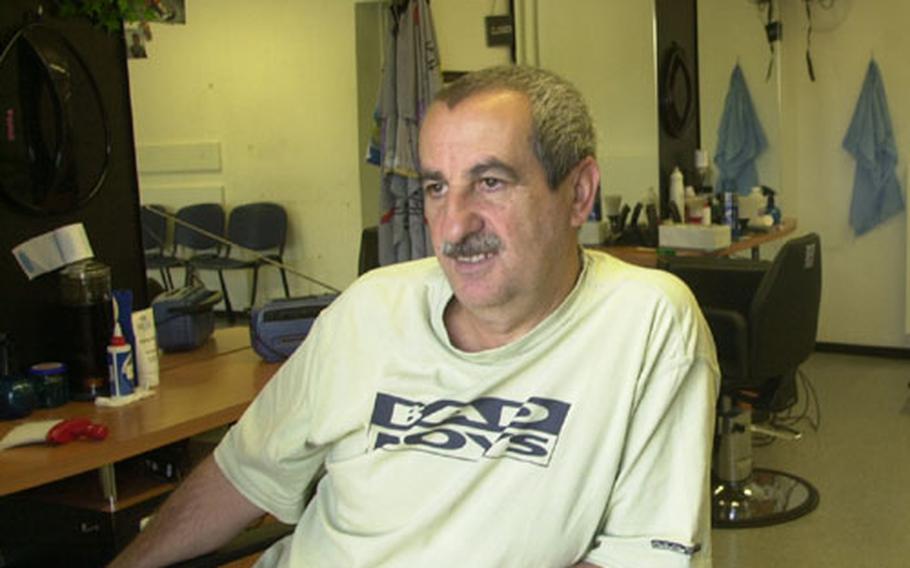 Two chairs, no waiting. That&#39;s pretty much how every day is for base barber Salvator Mudano now that most of the Baumholder, Germany, troops are in Iraq. (Raymond T. Conway / S&S) 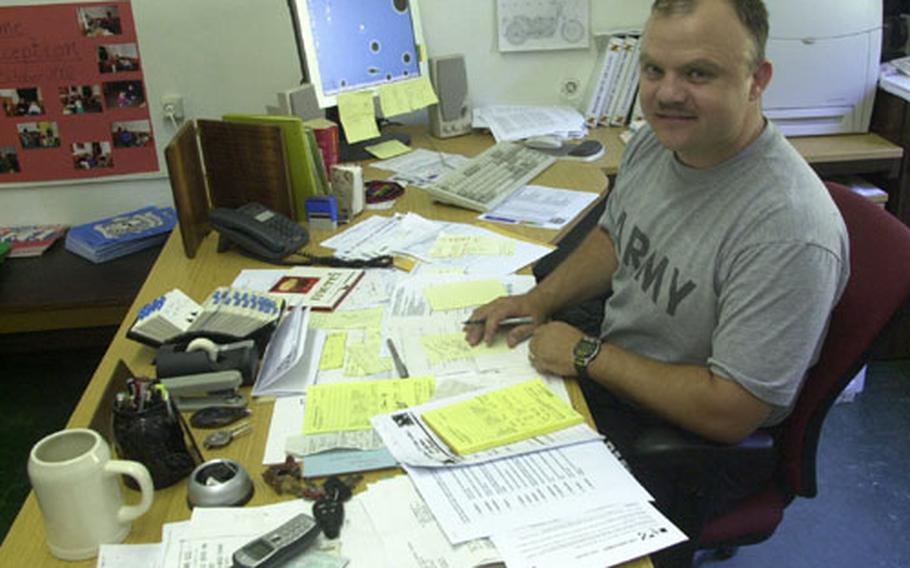 (One in an occasional series of stories about what&#39;s going on at home while the troops are deployed.)

There are days when tumbleweeds blowing across the empty streets of H.D. Smith Barracks would look just about right, now that everyone has gone.

Before the 1st Armored Division went off to war, this was bustling small-town America. And like every town in America, it has a barbershop. Used to be, troops would have to park at the top of the hill near the Community Bank and walk down to Salvatore Mudano&#8217;s shop on Texas Avenue. The barbershop and the beauty salon next door stayed pretty busy before the war.

On the really slow days, a customer can pull right up to the door, and chances are pretty good the native Sicilian can get to him right away. One day, he didn&#8217;t have a single customer from 2 to 4:30 p.m. Four barbers used to work in his shop, but it&#8217;s so slow that two went to work in Kaiserslautern.

Baumholder deployments have trimmed the number of barbershop customers, so to speak. Scissors don&#8217;t cut, razors don&#8217;t shave. On a midsummer Wednesday morning, Mudano was busy staring out of his shop&#8217;s window. The only car in the lot was his.

In his 30 years of cutting hair at Baumholder, Mudano can remember only one other time as quiet &#8212; when 1st Armored Division elements deployed to Kosovo in 2001.

Since 1st AD deployed in May, Baumholder&#8217;s vital signs have nearly flat-lined.

Of the 5,600 or so troops usually based here, only a handful of Base Support Battalion soldiers and Rear Detachment personnel remains. As of mid-July, about 200 families had asked for exception to policy to travel to the States for extended stays, says Dieter Gottsman, chief of customer service at 222nd BSB, Housing Division.

So, that&#8217;s roughly 1,000 more people gone, in addition to the soldiers. The odd thing is, even though the base and housing units look abandoned, theoretically another 6,000 people are here somewhere. Yet, there are days when pedestrians can look down Chicago Avenue toward abandoned motor pools or Avenue D toward the shoppette and not see a single car, coming or going.

True, other days, the base has pockets of life &#8212; the shoppette, the commissary, the Army post office and the cluster of fast-food restaurants next to the base theater. And there are days when troops from other areas reinflate the population, coming for training or medical treatment.

But there are days when Baumholder seems to be melting back into Germany.

At 9 a.m., the line of cars usually streaming onto the base now stretches only from a car&#8217;s headlights to its back bumper. It&#8217;s so slow, that the normally businesslike German security guards seem lonely. They have time to chat.

When the 2nd Brigade, Division Artillery and the rest of the American soldiers were here, it was as if there were more than just a perimeter fence separating the faster American tempo of H.D. Smith Barracks from the torpid village beyond.

Baumholder&#8217;s street traffic flows through a roundabout in the center of the base, in front of the 222nd BSB headquarters. Just across Pressman Avenue from the 222nd is the base flag. In Baumholder&#8217;s former days, at 5 p.m., when retreat normally sounds, lines of cars waiting to navigate the circle would stop. People coming from, or going to, the adjoining PX parking lot or the commissary down the hill got out of their cars to face the flag and wait until retreat ended. Car after car.

Traffic backed up as everyone stood at attention until the Stars and Stripes was lowered and &#8220;To the Colors&#8221; sounded. Now, no one has to worry that starting or ending duty days by paying respect to the flag is going to cause traffic jams.

Still, there is some semblance of normalcy.

Around the base, German construction crews repair streets and sidewalks outside empty company headquarters. Whether it&#8217;s a coincidence that maintenance and road projects are purring along while there&#8217;s no one to inconvenience &#8220;is up for debate. But it has worked out that way,&#8221; said Sgt. 1st Class Phillip Britcher. Britcher&#8217;s office at the 4th Battalion, 27th Field Artillery Regiment, is surprisingly busy, though right now, there are no real problems, &#8220;no [military police] knocking on my door. I would say everyone &#8230; is getting along.&#8221;

Britcher&#8217;s office phone is ringing about every two minutes. A spouse with paperwork that needs signing waits in the hall. It feels reassuringly routine.

But outside his office, the quiet is broken only by the sound of the wind blowing.

It&#8217;s been only a couple of months since the troops deployed and left silence in their wake.

When they come home again?

Activity at Baumholder, Germany, tends to have peaks and valleys, said Spc. Jorge Bonilla, with the 92nd Military Police Company. In the mornings, there will be a flurry of activity with soldiers doing physical training, Bonilla said. &#8220;After that, you don&#8217;t see anybody till noon.&#8221; Then, a lot of the families come out for shopping or lunch. &#8220;There are still families on base, so we have stuff to do every day.&#8221;

On base, the language heard most often some days is German. At 11:30 a.m. one midsummer Tuesday, there were 12 German troops eating at the 2nd Brigade&#8217;s Consolidated Dining Facility, but only five American soldiers.

Some facilities on post &#8212; especially the commissary &#8212; manage to remain busy, helping those families left behind. But outside, the only noise breaking the silence some days is from German Air Force F-3 Tornado fighter planes chasing each other just above the treetops.

The most noticeable change for people on base is that they don&#8217;t have to schedule their lives to avoid crowds. There are no crowds. For example, Baumholder has a good selection of fitness facilities, so Air Force Master Sgt. Donald Mock usually doesn&#8217;t have to wait to work out even when all the soldiers are here. &#8220;But I wouldn&#8217;t have my choice of aerobics equipment,&#8221; says the NATO airman, smiling as he does his miles on a treadmill directly in front of a television airing CNN.