Battle of the Bulge through GIs' eyes: Len Cinquanta 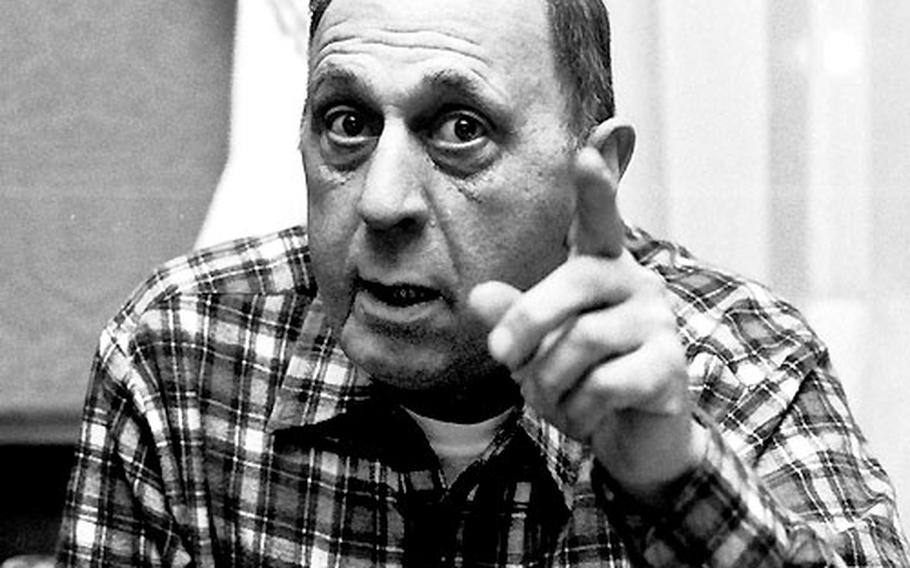 Buy Photo
Len Cinquanta talks about his experiences in the Battle of the Bulge during a reunion at Bastogne in 1988. (Ken George/Stars and Stripes)

Len Cinquanta fought in the Battle of the Bulge, and he has the scars to prove it. He's just not too sure how he got there.

He was a feisty private first class with the 101st Airborne who came to the battle numb and left a lot number. One minute he was resting and refitting, drinking champagne with his Airborne buddies in France, the next he was hearing explosions.

There had been a German breakthrough in the Ardennes, and the men of the 101st — many without overboots, overcoats, gloves, blankets or regular rations — rushed frantically to reinforce Bastogne.

"I have practically no memory of going to battle, says Cinquanta, of Utica, N.Y., though he's 66 and has had a lot of time to try to remember."

"The French general's orderly liked to swap soap for champagne, so we got 12 bottles of champagne for Christmas. So we drank 'em.

"In the first place, I don't drink too good. In the second place, I can't drink champagne at all.

"So they roused us up about 4 o'clock in the morning and brought us over in trucks, and I woke up and saw a sign. It said just one word: 'Luxembourg.' I said, 'What the hell is a Luxembourg?' I thought I had dreamed it. Then the light hit a sign that said 'Sedan.' And I thought, 'Hell, boys, we're in Africa.' I knew I was dreaming the whole thing.

"All of a sudden we're out on this hill. There was a cement building with no roof on it. Shells were going over it, and I thought, 'Kid, you'd better wake up.'

"I was 21 years old and pretty cocky.

"I ran into this man in a white helmet. He told me he was the mayor of Bastogne. He had logs stacked up in front of his windows to keep the shrapnel out, and he looked plenty worried. I said, 'What have you got to worry about, Mister Mayor?'

"I showed him my Airborne patches and said, 'There's no way anybody's going to get through us. Haven't you heard of us?'

"He said, 'Do you. realize how many Germans are out there?'

"You know the Airborne. Our colonel was always yelling, 'You're the best! You're the best! Nobody can beat you!' And we believed it. If I'd known how many Germans were out there, I maybe wouldn't have been so hot to get shot."

Cinquanta was in demolitions. Much of the time during the day, he stayed at the church in Bastogne. At night he went out, laid mines, blew things up.

In early January, his unit moved a couple of miles east of Bastogne and dug in at the edge of some woods. "There was a line company about 200 yards. ahead of us, over to the right in another patch of snowy woods. Out in the open men were bringing up ammunition. We were getting resupplied, and the Germans could see them, and they started hitting them with artillery. I heard a jeep coming. It was out. in this field, so I came out of the woods there and waved them: off.

"Well, the artillery started coming in. The first shell went over me. I got down like in the fetus position. I got up again. The second shell hit closer, and I heard . the shrapnel falling around like it was raining little rocks. But that third one . . ."

They say you never hear the one that gets you. They say if your name's on it, forget it. The third one came howling in on a hot, dark wind and landed with a big snowy splat, and Cinquanta didn't hear it. He lay in the smoke, not hearing, and then a voice washed down through the red sea parting in his head. It was the jeep driver: "Them SOBs got my thumb! Where're you hit?"

He looked up through this red muddy blur, oozing cold sweat as he climbed out of the valley of somebody's death, perhaps his own.

"Just a thumb would have been nice, but I had no idea. I was just numb. I looked up, and I was facing the field there. I had been facing the woods. I don't know how. Some guys got me in a jeep. There was an awful lot of blood running.

"They got me to somewhere else. Where, I have no idea. I heard this voice saying, 'I can't do anything for him here.' After that I don't remember.

"I came to in a big building with a blackout curtain. I would fade in and out. I heard artillery in the distance, but where that was I haven't the slightest idea. When I came to again, I was on a train, and the train was supposed to go to Paris. They had me in a little room on the train.

"I remember trying to get a nurse's attention there. I kept trying to lift my arm, trying to wave at her. And all she was saying was, 'Oh, my God.' I was really bleeding again. Then there were three or four guys around me, doctors, I guess, looking down with very serious frowns on their faces.

"They stopped the train by a siding, put me on a little handcart with two guys pumping it. I remember them pumping up and down, up and down, and I'm looking at the sky thinking I'm on the way to heaven.

"They carried me to a evacuation hospital in Verdun. You were only supposed to stay there 30 days, but I was in pretty bad shape, and they couldn't move me for three months."

Cinquanta wasn't supposed to make it, but he kept dragging himself up out of the pit. .

"Every morning the priest would come in and give me absolution. He seemed surprised I was still around. One day he said, 'I don't know how the Lord and the doc kept you going.' And I said, 'Aw, don't worry, there's no way I would let the lights go out in France.' Then, later, I went to a hospital in Paris."

He makes a sweeping motion, like he's dusting off the right side of his body. There are still little pieces of German steel pushing around in him, puckered up bluish under the skin in places.

"I lost something like five ribs gone and two others fractured, the nerves in the right arm cut through, most of the bone in the right jaw gone. Bunch of teeth gone. There was a lot of reconstructive surgery. So after 17 operations I stopped counting. I was in the hospital 2½ years."

"Clean living. They did a good job on me."

"How much can you use that arm?"

When he remembers the Battle of the Bulge, what's the first thing he thinks of?

"Cold. Just coooold. Jeez, it got to you. Worked so deep into you. I feel it to this day. We didn't have any overboots. I took a pair off a dead guy that was stacked by the church there. An American. We were always changing clothes with poor corpses.

"My feet were just froze. My boots were wet clean through. I just stuffed rags. or whatever I could get in there. When we went out on patrol at night I wore no boots, just overshoes stuffed with rags. Slop-slopping through the snow and the big blowing flakes that swallowed you up. You tried to get away from the cold, but you couldn't. It followed you everywhere and tried to sneak up on you. You'd brush a tree with your helmet and the snow'd end up sliding down your neck. You'd get groggy and go to sleep and never wake up."

Frostbite, trenchfoot, pneumonia, hands and lips splitting open, but too cold to bleed. Wounded men froze up in mid-cry, soon covered with snow and lost in thick freezing fog,. their blood frozen in little red lakes and streams around them. Rifles became ice sticks that wouldn't fire. Clothes rolled up in their packs froze so stiff they had to banged against a tree to loosen them up. The hungry and the thirsty ate snow off the branches of trees.

Cinquanta remembers never changing clothes and getting so filthy, ugly and stinking that he couldn't stand himself. When a bomb hit a water main by the church, gracious living suddenly came to Bastogne.

"I stripped right there in the middle of the street in the ice and snow and took a bath. I just wanted a bath so bad. In broad daylight. If you asked me how I dried myself off, I couldn't tell you. I didn't care who was lookin' either. It could have been the Holy Mother herself, it didn't matter.

"But morale was never real bad. The best time I ever had, to this day, was on Christmas Eve. We were in the church there. It really meant something. The guys, they got a hold of a pine branch, and they stuck it up there and hung decorations.

"Our squad, they sat around singin' Christmas songs. We sang Silent Night in the dark. All our wounded were in there. And the nuns would go by with lanterns, you know. It really felt like Christmas.

"I guess we had some faith. We never thought we were going to be overrun. The Germans had us surrounded, 'the poor bastards.' We said those words. I'd started out with my unit in basic training, and we believed in ourselves. Hell, I guess we were the best.

"We ran short on ammo, food, clothes, everything except booze. My old scrounging sergeant from Illinois kept coming over and saying, 'OK, boys, here's your rations,' and he'd give everybody a couple of bottles. Don't know where he got 'em. Nobody cared much where he got' em.

"Jeez, it seems like yesterday. It's all real strange. After I was wounded, my squad brought up a truckload of mines into a courtyard there. The truck blew up. The whole squad just disappeared. That was my squad. I would have disappeared with them if I hadn't been wounded."

Cinquanta wanted to find the place, the very spot, where he nearly became a name on a white cross. He went out looking, but couldn't find it.

"You would have thought I was visiting the Eskimos. It's not nearly as cold here this time. I kept thinking about the cold. I'll never forget the cold. It was a lot different in 1944. You oughta see all this great winter stuff I bought to wear. Enough to keep 10 guys warm. Jeez."