Battle of Okinawa vet shares story of courage under fire 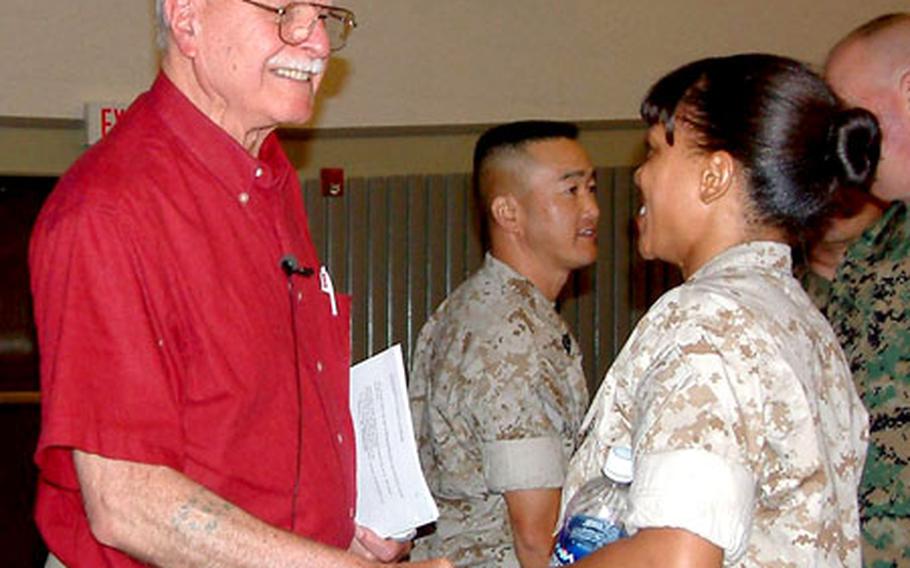 Robert Boardman, 81, greets Marines at the Foster Theater on Tuesday after a lecture on courage and leadership. Boardman was awarded a Silver Star and two Purple Hearts for action during the Battle of Okinawa at the end of World War II. (David Allen / S&S)

CAMP FOSTER, Okinawa &#8212; Every Father&#8217;s Day for 60 years, Robert Boardman has relived a bit of the day he came closest to meeting his maker on an Okinawa battlefield.

It was a day then-Cpl. Boardman and his tank&#8217;s crew of &#8220;common men&#8221; became uncommon heroes, saving the lives of other Marines caught in a vicious last-stand attack by doomed Japanese soldiers at Kunishi Ridge, on the island&#8217;s southern end.

&#8220;We had stopped for the night of June 16 in a sugar cane field &#8230; under the cover of darkness the Japanese moved in their 76 mm antitank guns,&#8221; Boardman told some 50 senior enlisted Marines at the Foster Theater on Tuesday. &#8220;The next day they let us have it, putting shells right through our tank. I thought that was the way we were going to die.&#8221;

Boardman drove a Sherman tank with the 1st Tank Battalion, 1st Marine Division. For what happened next, he and two other tankers earned Silver Stars.

Their ammo loader was killed and the tank commander seriously wounded. Boardman and the assistant driver dragged the commander from the stricken tank &#8212; and straight into a hail of rifle fire from Japanese soldiers who had surrounded the tank.

All three were hit, Boardman said in a raspy voice that reminds him daily of the bullet that ripped through his throat and tore off his index finger.

&#8220;They were aiming for our heads but, thankfully, the Lord tipped their rifle barrels and the bullets went through our necks instead.&#8221;

Boardman&#8217;s citation praises him for &#8220;outstanding courage and devotion to duty under fire&#8221; during the fight that began that Father&#8217;s Day. Almost 60 years later, he told the Marines who gathered to hear him speak that &#8220;no one knows if they are truly courageous until they come face to face with danger.&#8221;

During the 82-day Battle of Okinawa, thousands of Americans faced the ultimate danger. Their names, with 230,000 names of the Japanese and Okinawans also killed, are inscribed on marble tablets at Peace Prayer Park near Kunishi Ridge, Boardman said.

During his presentation Tuesday, Boardman also shared how he found religion during his two years fighting overseas, during which he saw action at Cape Gloucester in New Britain, Peleliu and Okinawa. He later returned to Okinawa, where he and his wife, Jean, were missionaries from 1952 to 1956. It began a calling that would lead them to spend the next 36 years in Japan.

At the end of the hourlong talk, his voice barely audible, he thanked those who listened for carrying on the tradition.