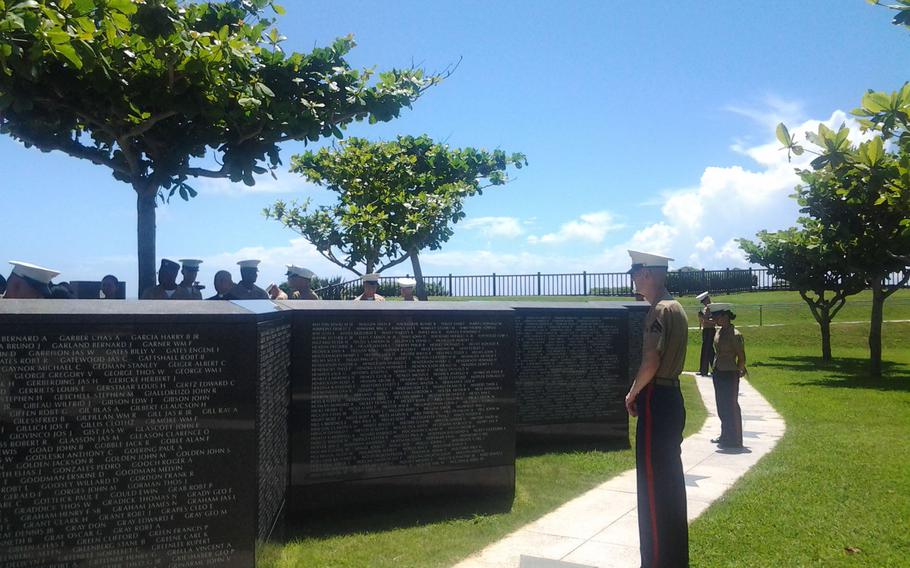 Marine Cpl. Brent Haffey of Kansas, assigned to Marine Corps Air Station Futenma, pauses a moment Thursday, June 23, 2016, at a memorial inscribed with U.S. servicemembers who died in the Battle of Okinawa in 1945. Haffey was among about 50 American and Japanese people who took part in a ceremony to remember those who fell in the battle on Okinawa 71 years ago. (Chiyomi Sumida/Stars and Stripes)

Marine Cpl. Brent Haffey of Kansas, assigned to Marine Corps Air Station Futenma, pauses a moment Thursday, June 23, 2016, at a memorial inscribed with U.S. servicemembers who died in the Battle of Okinawa in 1945. Haffey was among about 50 American and Japanese people who took part in a ceremony to remember those who fell in the battle on Okinawa 71 years ago. (Chiyomi Sumida/Stars and Stripes) 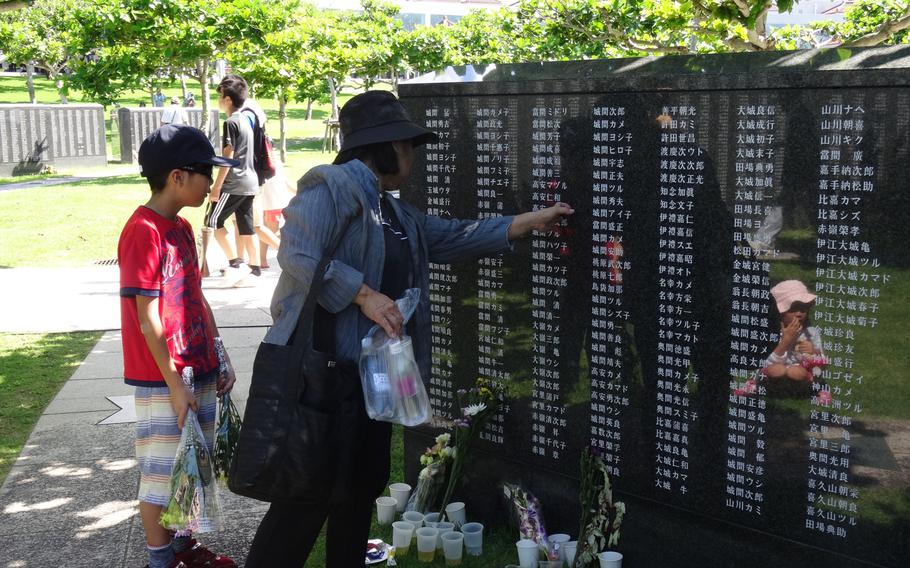 Yoshiko Maeshiro shows her 11-year-old grandson, Takuto, the name of her uncle at the Okinawa Peace Prayer Park Thursday, June 23, 2016. A ceremony was held to mark the 71st anniversary of the end of Battle of Okinawa. (Chiyomi Sumida/Stars and Stripes)

ITOMAN, Okinawa — Recent strains on the U.S.-Japan alliance were clear Thursday as high-level representatives of both countries gathered to commemorate the 71st anniversary of the end of the Battle of Okinawa, one of World War II’s fiercest ground battles.

The distinguished guests at the annual ceremony at the Okinawa Peace Park included Prime Minister Shinzo Abe, his cabinet members and chairs of both houses in the Diet, along with U.S. Ambassador Caroline Kennedy and III Marine Expeditionary Force commander Lt. Gen. Lawrence D. Nicholson.

In the wake of the recent slaying of a 20-year-old Okinawan woman that has been linked to a U.S. civilian base worker, the ceremony took on more political flavor than usual this year.

“I am outraged by the vicious and atrocious incident that an individual connected to the military is involved,” said Abe, who wants an even closer relationship with the U.S. and was the target of protesters outside the Japanese parliament building Sunday for his recent moves to ease the restrictions that prevent Japan’s self-defense-only military from coming to aid of allies under attack.

Kenneth Franklin Gadson, a former Marine who became a civilian contractor at Kadena Air Base, has been held for five weeks in the slaying of Rina Shimabukuro. Police have recommended murder and rape charges.

The incident has fired up the anti-base movement on Okinawa, where an estimated 65,000 people demonstrated Sunday to demand all U.S. troops leave the island, and tainted President Barack Obama’s visit last month.

Abe told the roughly 4,500 guests that his government would continue an all-out effort, including review of the status of forces agreement, to reduce the burden on Okinawa, which hosts about half of the U.S. forces in Japan.

Okinawa Gov. Takeshi Onaga spent a large portion of his annual peace declaration to denounce the disproportionately large military presence on the island prefecture, which he blamed for recent servicemember crimes, including a rape by one Navy sailor and a wrong-wave crash another.

“We have repeatedly seen incidents and accidents over a long time precisely because of the presence of these extensive U.S. military bases,” he said. “The people of Okinawa are greatly shocked, concerned and resentful over this most recent inhumane and brutal incident.”

The U.S. military bases on Okinawa are a national security issue, he said.

“The burden of the U.S.-Japan security arrangements, therefore, should be shouldered by Japanese nationals as a whole,” he said.

He said the current plan to move Marine Corps Air Station Futenma operations to Camp Schwab is not supported by Okinawa’s people.

“We cannot tolerate at all the viewpoint that the current plan is the only solution,” he said to an ovation.

A separate memorial was held earlier at the Cornerstone of Peace memorials in the park where 241,414 victims of the Battle of Okinawa are inscribed, including Okinawa residents, Japanese, Americans, British and Koreans.

Nicholson said he came to remember and pay respect to those who made incredible sacrifices.

“We take a moment to remember the great loss of lives on American side, Japanese armed forces side and Okinawan civilian sides,” he said.

Those who survived the war have seen the unity of the two nations, he said.

Yoshiko Maeshiro, 60, sat with her two grandchildren before a memorial panel with the names of two uncles. She said her late mother gravely missed her young brother, who died at 19.

“I come here every year for my mother’s sake and at the same time to convey to my grandchildren the consequences of war and importance of peace," she said. “In war, you kill people you even don’t know, and have no hatred for at all.”

Shizu Nakamura, 75, said she lost her father in the war when she was 4. The war was frightful and the misery that followed was more than she could describe.

“My big regret in my life is that I could not go to school because I had to work to support my family,” she said.