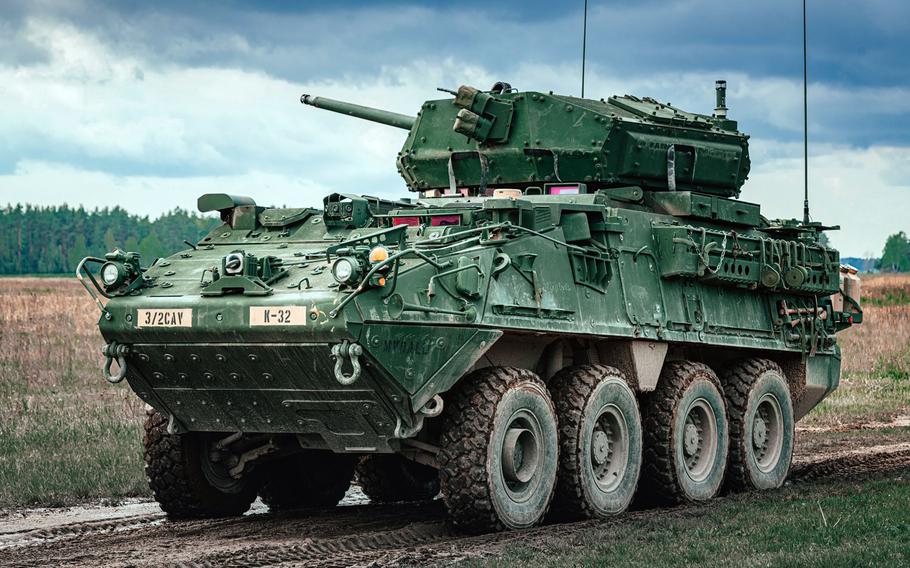 U.S. soldiers with the 2nd Cavalry Regiment maneuver in a Dragoon Stryker during a live-fire gunnery training event in Bemowo Piskie, Poland, May 13, 2020. (Timothy Hamlin/U.S. Army)

U.S. soldiers with the 2nd Cavalry Regiment maneuver in a Dragoon Stryker during a live-fire gunnery training event in Bemowo Piskie, Poland, May 13, 2020. (Timothy Hamlin/U.S. Army) 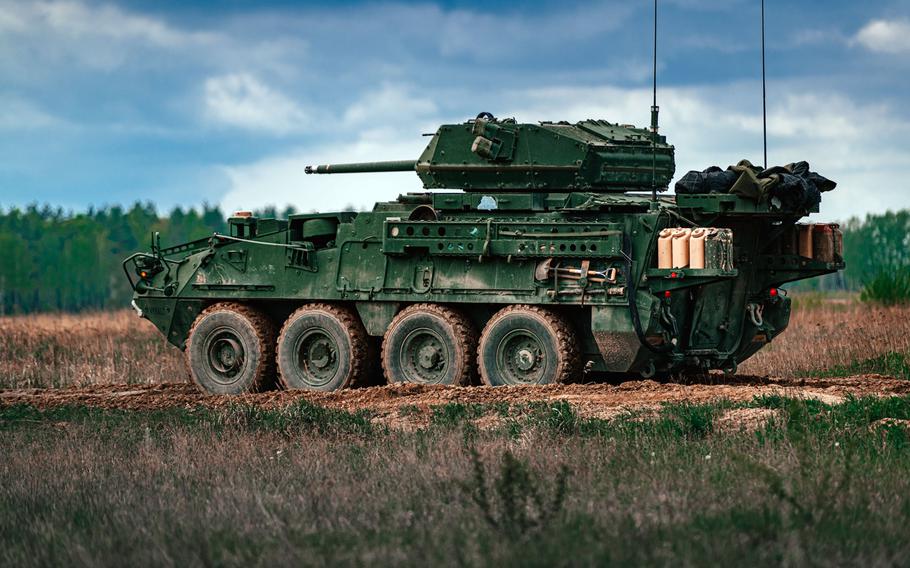 BEMOWO PISKIE TRAINING AREA, Poland — Not far from Russian territory, U.S. soldiers at this Polish base have been putting the Army’s newest “upgunned” Stryker combat vehicles through their paces.

Half of the unit’s Strykers have a 30 mm gun and the other half have an anti-tank Javelin Weapon System, said Lt. Col. Andrew Gallo, 3rd Squadron commander with the 2nd Cavalry Regiment, and commander of the Enhanced Forward Presence battle group.

The regiment uses the infantry carrier variant to deploy its fighters and engage enemy forces, Gallo said. It is the first and only unit in the Army to get the variants with enhanced weaponry, which were first deployed to Europe in late 2017. Last week, the squadron used them in live-fire exercises here, about 50 miles south of the Russian enclave of Kaliningrad.

“Unlike other Stryker brigade combat teams in the Army, (the EFP battle group) has significantly enhanced lethality, which is critical based on any potential emerging threats we may face in this area,” Gallo said.

In nearby Kaliningrad, Moscow plans to reestablish a “fighter aviation regiment and naval assault aviation (bomber) regiment,” the Heritage Foundation, a conservative U.S.-based think tank, said in an October report.

The live-fire event comes as U.S. and other NATO forces about 340 miles to the west took part in the Allied Spirit exercise, an effort to bolster cooperative defense efforts in Europe.

Russia remains a threat to the Continent, particularly through its uses of cyberattacks and information warfare to expose and exploit vulnerabilities, the Heritage Foundation report said.

It was Moscow’s intervention in Ukraine’s Crimean peninsula that prompted the Army to speed development of its light armored vehicles in 2015, after realizing that the machine-gun-armed Stryker was outmatched by Russian BMP-3 tracked infantry fighting vehicles.

The Russian vehicles are armed with a 100 mm low-velocity gun, and BTR-82 wheeled transporters carrying either a 30 mm autocannon or a 120 mm gun mortar.

“The Russians, it turns out, had upgraded and fielded significant capabilities while we were engaged in Iraq and Afghanistan,” Gen. Daniel B. Allyn was quoted saying in January 2017, while serving as the Army vice chief of staff.

Late last year, the service announced plans to install anti-electronic warfare systems in more than 300 of its Europe-based Strykers to protect from adversary attempts to cripple GPS-based systems in the event of a conflict.

“Dragoon” Strykers, named after the 2nd Cavalry Regiment and armed with 30 mm Medium Caliber Weapon Systems, can fire high-explosive, armor-piercing and air-burst rounds at double the range of machine guns mounted in the Common Remote Weapons Station, or CROWS.

The CROWS-J Stryker is equipped with Javelin anti-tank missiles, which the Army has said have a qualified range of 2,500 meters and are “highly lethal” to tanks and other targets.

The weapons improvements give the eight-wheeled vehicles a huge boost in firepower, compared with the once-standard M2 .50-caliber machine guns. The 30 mm cannon is also paired with an M-240B, which can be dismounted and used by soldiers maneuvering on foot, said Sgt. Daniel Torres, a Stryker vehicle commander.

For Torres, the best thing about the vehicle is its speed and capacity to carry troops and all their equipment into battle. The General Dynamics-made Stryker has a top road speed of over 60 mph and a range of over 300 miles, the Army has said.

“Both [variants] are used at the same time, each one is specialized for certain situations, but they both enhance mobility on the battlefield,” Torres said.