'Battle Company' living up to its name 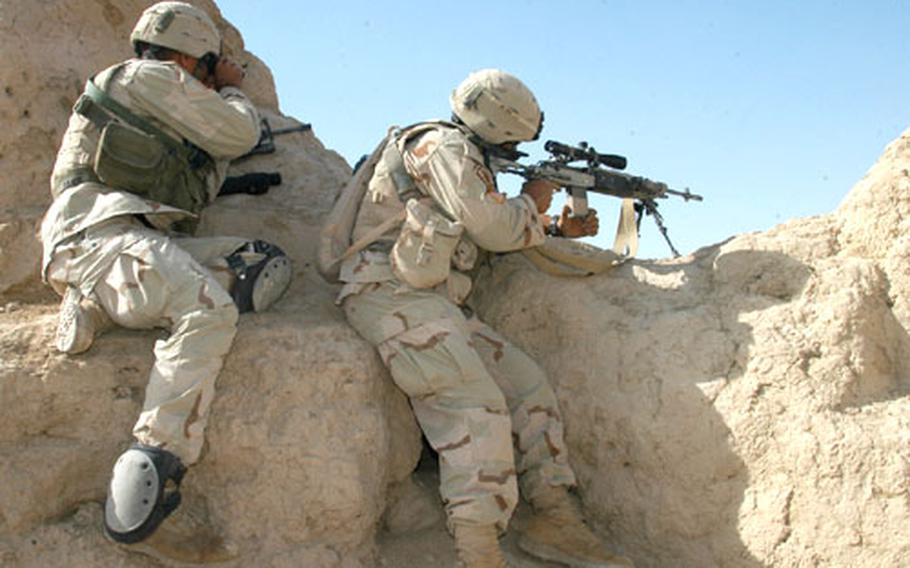 Spc. Archie Moore, with the M-14 rifle, and his spotter, Spc. Mick Sleik, watch a handful of Afghan men near a building as other members of Company B, 2nd Battalion (Airborne), 503rd Infantry Regiment, clear a village and compound of Taliban fighters. (Jason Chudy / S&S)

Spc. Archie Moore, with the M-14 rifle, and his spotter, Spc. Mick Sleik, watch a handful of Afghan men near a building as other members of Company B, 2nd Battalion (Airborne), 503rd Infantry Regiment, clear a village and compound of Taliban fighters. (Jason Chudy / S&S) Soldiers from "Battle Company" walk through the Afghan desert to a blocking position during a Thursday afternoon mission to capture a Taliban financier. An AH-64 Apache from 2nd Squadron, 6th Cavalry Regiment covers their move. (Jason Chudy / S&S) Staff Sgt. Carlos Navas watches as an Afghan National Policeman starts to climb down a hole after soldiers from "Battle Company" had thrown a grenade in it. The hole, which had small tunnels running from each side, was part of a chain of large holes that in the past had most likely been used for irrigation. Taliban forces have used tunnels and caves to hide ammunition and supplies. (Jason Chudy / S&S)

FORWARD OPERATING BASE LAGMAN, Afghanistan &#8212; Soldiers from 3rd Platoon, Company B, 2nd Battalion (Airborne), 503rd Infantry Regiment lived up to their &#8220;Battle Company&#8221; nickname Thursday, killing five Taliban and capturing 10 others during fighting at a compound about 15 miles west of the base.

The soldiers and members of the Afghan National Police were sent on the afternoon mission to capture a Taliban member who was believed to be living in the area.

&#8220;The dude we were going after was a Taliban money guy; he was the bankroller,&#8221; said Capt. Mike Kloepper, company commander. He said the financier was not one of the 10 people captured.

Soldiers detained seven men and collected a handful of weapons as other unit members cleared a nearby village that was believed to be a home to insurgents.

Nothing was found in the village, but soldiers back at the compound continued their search.

AH-64 Apache helicopters from 2nd Squadron, 6th Cavalry Regiment, covered the troops from overhead, scouting the area for the enemy and finding trenches and fortified caves.

Soldiers killed two armed fighters in the trench line. Four other insurgents were killed nearby. This was the platoon&#8217;s first fight since returning from Kandahar, where they spent a month as the quick-reaction force for southern Afghanistan.

&#8220;Our speed and aggression was built up over the past month,&#8221; Charlesworth said about their time in Kandahar, where they retrained their basic combat skills and spent hours working out.