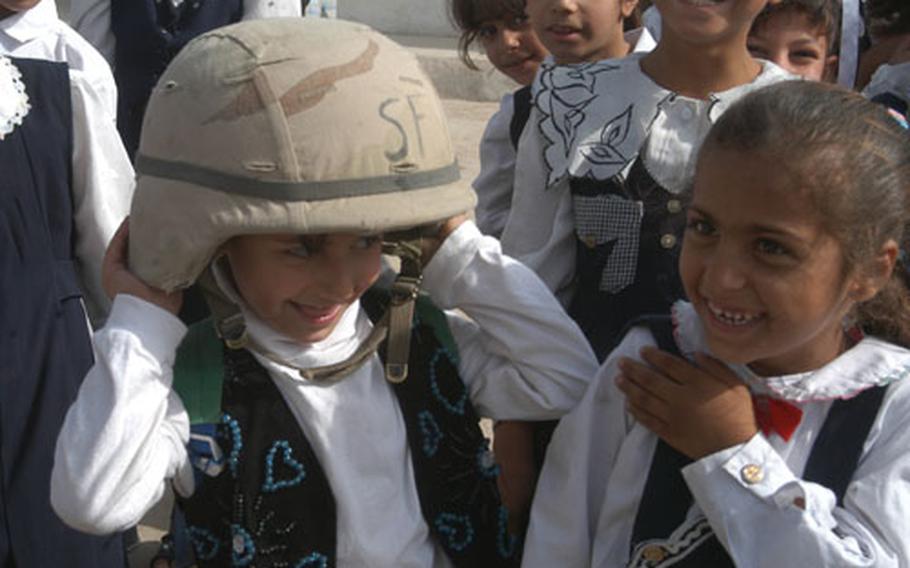 A little girl who charmed Lt. Col. Chuck Williams of the 1st Cavalry Regiment models a helmet Monday to the delight of her friends at the grand opening of their school in a Baghdad neighborhood. (Ron Jensen / S&S)

A little girl who charmed Lt. Col. Chuck Williams of the 1st Cavalry Regiment models a helmet Monday to the delight of her friends at the grand opening of their school in a Baghdad neighborhood. (Ron Jensen / S&S) BAGHDAD &#8212; More than 300 students ages 6 to 11 benefited the most when a school that had been damaged in war and looted in peace was opened for the new school year.

But the widest smile belonged to Lt. Col. Chuck Williams, the commander of 1st Squadron, 1st Cavalry Regiment, 1st Armored Division, which is now far from its home in B&#252;dingen, Germany.

His squadron was instrumental in getting this school in a Baghdad neighborhood near the airport repaired and opened for the school year.

Williams&#8217; troops helped coordinate work and funding for a local contractor, and provided many supplies for the school.

Everything, was taken from the school, even bricks, he said.

Raheem Ali, the headmaster, said the school was important to the children in the Farat neighborhood, an area greatly damaged in war. The school grounds, in fact, became a battleground.

Williams said the project of getting this school open for the new year was a great boost to unit morale.

It was hard not to be touched by the event. The students stood in near-military formation for long, long minutes waiting for all the dignitaries to arrive. They applauded speeches designed mostly for older ears.

And when the event ended, they marched smartly to their respective classrooms.

Williams has bigger plans. The entire facility is surrounded by a wall, which has been repaired. An empty, broken building on the compound is destined to be a neighborhood clinic.