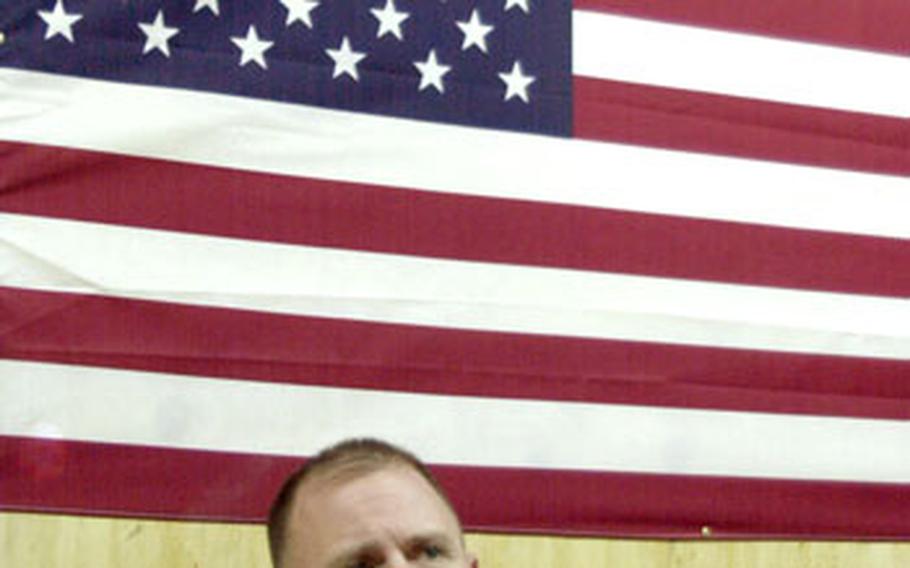 Capt. Mike Smith, the chaplain for the 1st Battalion, 505th Parachute Infantry Regiment, meets with up to 50 soldiers a month to help them work through the stresses of war and of being away from home. “My job isn’t to preach to them,” Smith said. “My job is to get to the problem and get them help.” (Teri Weaver / S&S)

RELATED STORY:Younger soldiers under stress more likely to get help

MADAIN, Iraq &#8212; Last month&#8217;s deadly shooting at a stress clinic on the biggest U.S. military base in Baghdad prompted a meeting between Lt. Col. Dave Bair and his battalion&#8217;s chaplain, Capt. Mike Smith.

The two men sat down and asked aloud: Should they be doing anything different to watch for danger signs among their nearly 800 soldiers?

Their answer was a cautious no. They had understood going into the deployment that soldiers confronting multiple, intense stressors were susceptible to breakdown, and they&#8217;d laid the groundwork for an approach they hope will pre-empt similar tragedies.

The 1st Battalion, 505th Parachute Infantry Regiment is part of the storied 82nd Airborne Division out of Fort Bragg, N.C. The battalion served a 15-month tour during the 2007 "surge." They had 11 months at home before returning last December, and now they are at this relatively small base about 15 miles southeast of Baghdad.

About half of the soldiers in the battalion have deployed previously. One soldier is on the seventh deployment in his career. Bair is on his fourth this decade.

"We&#8217;ve done an awful lot," he said, recounting the months and years away from home.

Before Bair left North Carolina last December, he and Smith put together a plan for assessing and addressing stress and morale during this tour. The plan included an anti-suicide class and an anonymous survey to judge morale and the likelihood that a soldier would seek help.

Those survey results, received earlier this month, show two main things &#8212; the unit is growing weary of current living conditions and the time away from home is taking its toll, Bair and Smith said.

The soldiers&#8217; answers were no surprise to the two men. That&#8217;s because in addition to the formal classes and policies, Bair has deployed Smith to take time with the soldiers who show signs of needing help.

Each month, Smith sees 40 to 50 soldiers. Some need mentoring and a break. About a third have more serious problems &#8212; stresses with their fellow soldiers, with financial problems, with family back home. Many are young and are working through the challenges of growing up while in a war zone.

By paying attention, Smith said, he and other commanders can help keep a stressful situation from becoming a more desperate one.

Smith can see stress coming from many directions. He began his military career as an enlisted Marine and served nine months in the first Gulf War. He was a deputy sheriff in Hillsborough County, Fla., for 11 years. He rejoined the service as an ordained minister with the Associated Gospel Churches.

In preparing for his ministry, Smith earned a graduate degree and took classes on how to counsel. When he&#8217;s worried that someone needs additional help, he&#8217;ll refer the soldier to their brigade&#8217;s social worker or a more trained mental health expert. There have been a couple of cases in the past six months where he and others agreed to send a soldier to Baghdad for more specialized care, he said.

At Baghdad&#8217;s Camp Liberty in early May, five servicemembers were shot and killed in a clinic meant to help people experiencing mental health issues. A Bamberg, Germany-based soldier has been charged with murder in the shooting deaths.

That incident, and rising numbers of suicides among servicemembers worldwide, has prompted military leaders to push soldiers and unit commanders to look for signs of mental exhaustion and suicide attempts.

At larger bases in Iraq, the Army has set up "combat stress clinics" where soldiers can go, sometimes without an appointment, to talk with a social worker, a psychologist or even a psychiatrist. Commanders can also order their soldiers to go there for counseling.

Combat Outpost Carver, like many smaller bases in Iraq, doesn&#8217;t have reliable showers, much less an official stress clinic. And it&#8217;s the showers &#8212; and the lack of toilets and a decent place to sleep &#8212; that more soldiers are worried about.

Bair knows. The unit inherited a base in the farmlands southeast of Baghdad that was established during the "surge." It was a time when the focus was on beating back the enemy, not wireless Internet.

This tour has a different pace, Bair and his soldiers say. The battalion arrived in December and spent its first five months at Forward Operating Base Falcon, a base with big mess halls, fast food and more than one gym.

The unit moved out to Carver in May, weeks before the Army would get firm contracts for cleaning the base&#8217;s aging portable toilets.

Several soldiers began sleeping in cargo containers refitted with plywood and bunk beds. The battalion showers in treated water piped in from the nearby Tigris River.

As battalion commander, Bair knew the schedule of the improvements. But after seeing the results of the survey, he realized he should share that information with his troops.

Now, he said, an updated schedule for improvements such as new housing units and better plumbing will be posted every two weeks.

Attention like that helps the junior soldiers. But the officers themselves are one group that may not seek help, said Smith and Lt. Col. Avery Davis, the battalion&#8217;s doctor.

"We are not immune to the stresses of being here," said Davis, who serves as the chief of physical medicine at Walter Reed Army Medical Center and is attached to the battalion for a year.

Yet they, too, worry about asking for help &#8212; about delays or denials for future promotions and security clearances.

"There is, among the officer corps, still some stigma," Davis said.

It&#8217;s this stigma that Smith and others are battling among all ranks.

"I wish there was a way to change the stereotype of asking for help," says the former Marine, who remembers it was years before he sought help for the experiences he had in the first Gulf War.