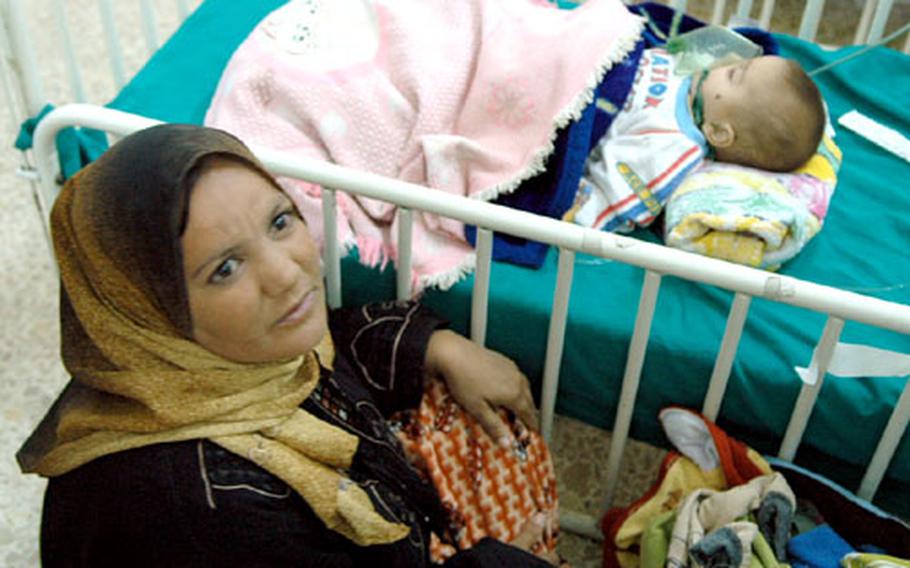 A woman keeps watch over her ill son at the Alwaiya Children&#39;s Hospital in Baghdad. (Anita Powell / S&S)

A woman keeps watch over her ill son at the Alwaiya Children&#39;s Hospital in Baghdad. (Anita Powell / S&S) 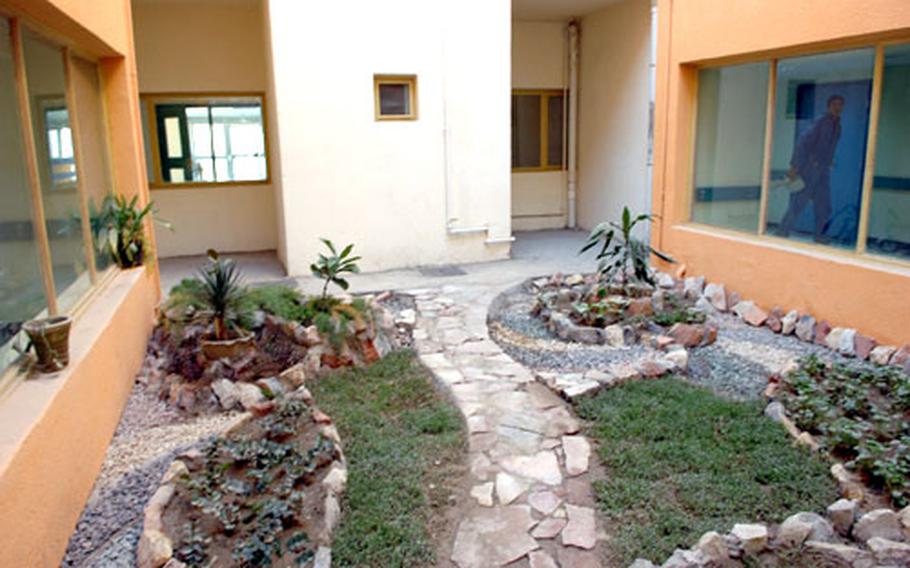 A courtyard garden in the new wing of the Alwaiya Maternity Hospital. (Anita Powell / S&S) 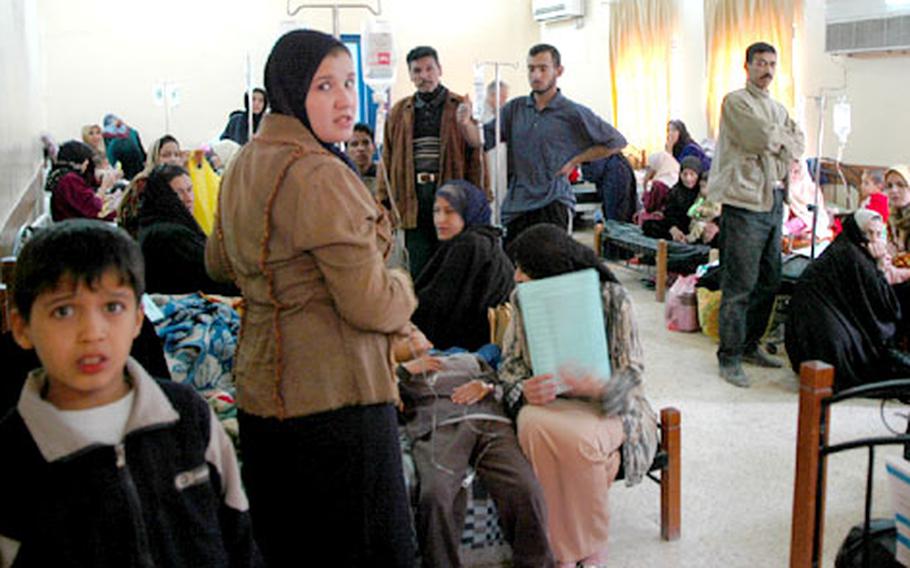 Parents and children crowd into a ward of the old wing at the Alwaiya Children&#39;s Hospital. (Anita Powell / S&S) 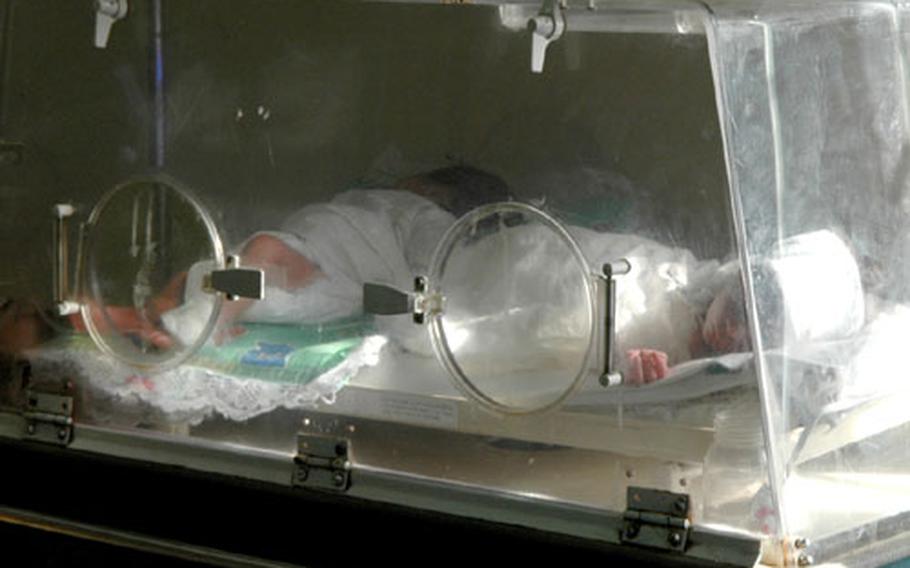 Two babies share an incubator at the Alwaiya Children’s Hospital in Baghdad. The new hospital will have a large neonatal care ward. (Anita Powell / S&S) 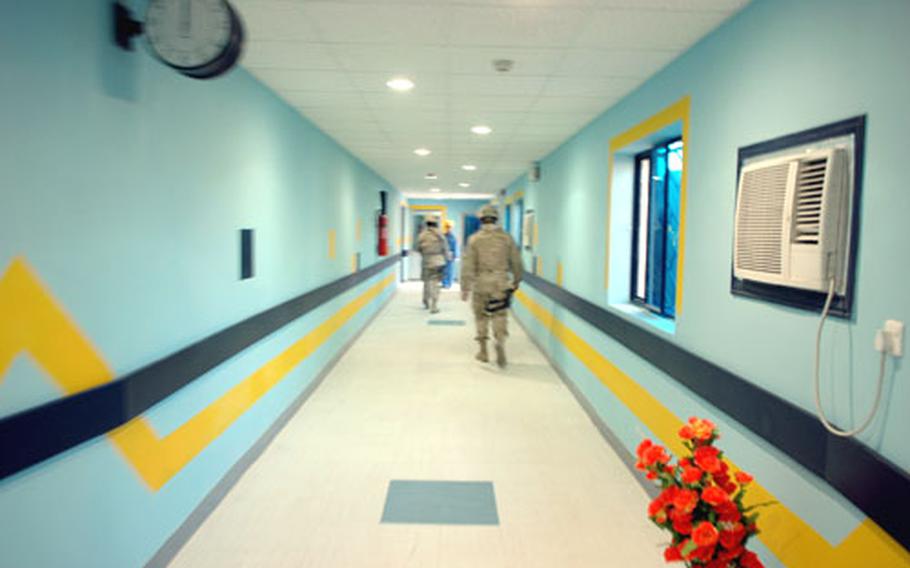 BAGHDAD &#8212; Entering the one operational wing of the Alwaiya Children&#8217;s Hospital is like stepping back 60 years in time.

The government-run children&#8217;s hospital, situated in a middle-class district in eastern Baghdad, was built in 1945, and appears not to have been updated &#8212; or cleaned much, for that matter &#8212; since. The hallmarks of a modern hospital, such as computers, proper ventilation and up-to-date equipment, are conspicuously absent.

&#8220;This hospital has been neglected for renovation for over 40 years,&#8221; said Almar Abdul Kareem, an engineer overseeing a U.S. Army Corps of Engineers project designed to bring the dilapidated hospital, and a few others in the Baghdad area, into the 21st century. The project is one of many being undertaken in the east Baghdad area by the 4-3 Brigade Troops Battalion, 4th Brigade Combat Team, 3rd Infantry Division of Fort Stewart, Ga.

Commander Lt. Col. Vincent Quarles said the battalion has conducted 326 essential service projects in the east Baghdad area &#8212; at a cost of nearly $250 million &#8212; since arriving in Iraq 11 months ago. Most of the work is done by local laborers, about 5,000 of them each month, he said. Projects range from the big to small, from sewer pump stations and electrical nets to water treatment plants and projects such as the hospital.

Within the hospital&#8217;s dank, crowded interior, abaya-clad women gazed hopefully through the smeared plastic of incubators at their swaddled, barely breathing infants. Some of the incubators held two infants for lack of space.

Ten percent of the children would die, one doctor said quietly, many as a result of respiratory failure, some of it stemming from poor ventilation.

In another room, entire families camped out beside ill children on tiny beds packed into a stuffy ward. Harried nurses tried to grab a quick bite in their stuffy, poorly lit offices while preparing medication, giving shots to screaming babies and attending to frazzled parents presenting a litany of complaints.

Those requests are being answered by the Corps of Engineers, which has spent more than a year and about $2.87 million restoring half of the hospital, which presents a stark contrast to the other side. Inside the renovated half, gleaming, well-lit hallways open into spacious, well-ventilated wards. The new wing is scheduled to open in early January.

Almar, who marched through the hallways with visible excitement, proudly showed off new ventilation systems, water purifiers, air conditioners and generators. He even enthusiastically pointed out wood detailing at a nurses counter.

Elsewhere in east Baghdad, inside the Alwaiya Maternity Hospital, similar improvements are in progress, to the tune of $5.75 million.

The old wing of the hospital is a place of eerie quiet, where men and women wait sullenly in dingy hallways and bleary-eyed women, covered from their necks to their toes with blankets, are wheeled around by stern-looking nurses.

The renovated side of the hospital, scheduled to open in March, is a bright, airy place with cheery rooms for recovering patients, wide, bright hallways and new quarters for doctors. As in the children&#8217;s hospital, every exam room will have Internet access and a computer.

The engineers have even taken pains to add quality-of-life touches, often at their own expense, such as the wood detailing at nurses counters.

Inside the maternity hospital, a small courtyard &#8212; a mirror image of a rubble-filled courtyard in the old part of the hospital &#8212; has been pruned into a tranquil garden.

The engineers have even added a cheeky touch: On the first floor of the maternity hospital, they&#8217;ve made room for a flower shop.