Battalion gets a hostile reception at Sadr City 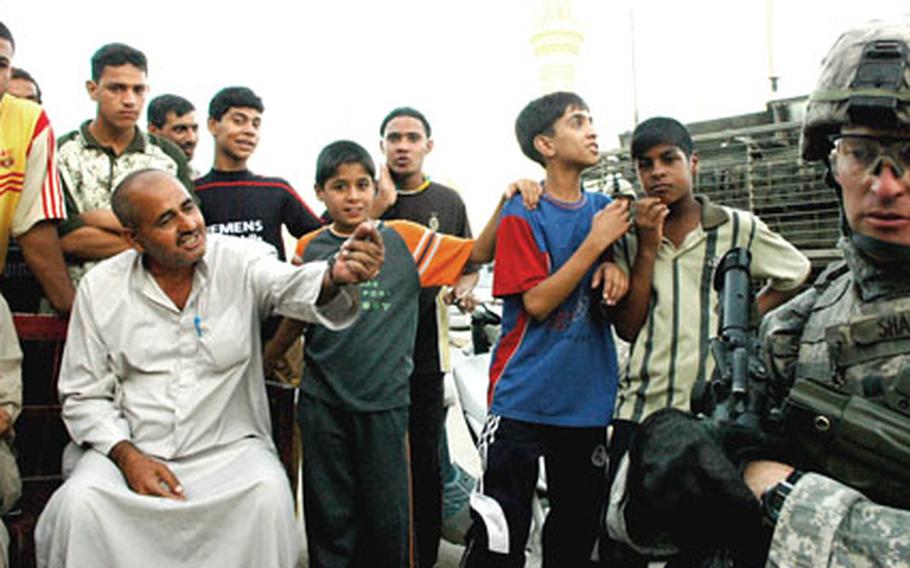 Capt. Kevin Sharp, far right, listens as men at a café in Sadr City tell him U.S. soldiers are not wanted in that district of Baghdad. Troops from the 1st Battalion, 17th Infantry Regiment visited the area Sunday and were met with a negative reception from residents. (Anita Powell / S&S)

Capt. Kevin Sharp, far right, listens as men at a café in Sadr City tell him U.S. soldiers are not wanted in that district of Baghdad. Troops from the 1st Battalion, 17th Infantry Regiment visited the area Sunday and were met with a negative reception from residents. (Anita Powell / S&S) 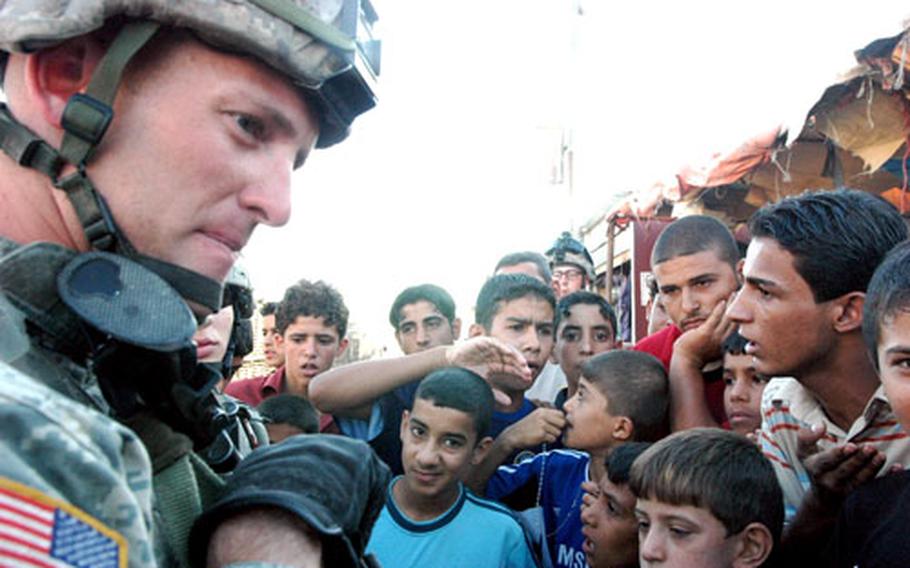 At a market in Sadr City, Baghdad, a crowd of local men and boys gather around Capt. Kevin Sharp, of the 1st Battalion, 17th Infantry Regiment. (Anita Powell / S&S)

BAGHDAD &#8212; Residents of the city&#8217;s most virulent Shiite stronghold gave soldiers a heated and hostile reception Sunday as the 172nd Stryker Brigade Combat Team rolled into the eastern Baghdad slum of Sadr City for the first time.

Overall, Sunday&#8217;s mission, which was part of a larger operation to clear Baghdad of sectarian violence, was free of major incidents. One company was shot at during an afternoon patrol, though the bullet widely missed its mark.

Many soldiers, though, were barraged with angry rhetoric and crude gestures while rocks pinged off their heavily armored vehicles.

Local policemen joined the Alaska-based soldiers for patrols throughout the day. On some patrols, soldiers said, the policemen were hesitant to get out of their trucks. On some of the others, the policemen carefully distanced themselves from the American soldiers, melting effortlessly into the crowd.

For Capt. Kevin Sharp, commander of Company B of the brigade&#8217;s 1st Battalion, 17th Infantry Regiment, the venture into the infamous slum &#8212; which has as many as 3 million inhabitants, according to local estimates &#8212; was an exercise in taking abuse with grace.

The ever-smiling Tennessee native met few smiles among the area&#8217;s residents. Everywhere he stopped, he quickly drew a large crowd of animated men and boys, demanding to know why the soldiers had come to Sadr City. Boys as young as six spewed expletives, proclaimed their hatred for America and told the soldiers to go home.

In another area, 19-year-old Mohammed Abdul Kareem, who said he is illiterate, lamented his lack of a job. A man standing next to him offered a different complaint.

Later, Sharp said that in future forays into the neighborhood, his actions, not his words, would win the trust of Sadr City residents.

At an outdoor tea shop, young men sucked on water pipes as they eyed the soldiers with suspicion. The sweet smell of strawberry tobacco wafted through the air. A crowd suddenly materialized around the caf&#233;.

At the police station, members of an U.S. Army police training team pointed to signs that the police force had close ties to the Mahdi Army, the Shiite militia headed by radical leader Muqtada Al-Sadr.

A sign on the wall of the station, a translator explained, said, &#8220;Anyone who says we&#8217;re fixing the problems in this city is liar. The only one who can fix the problems is the Prophet.&#8221;

At the end of his tour, Sharp shook his head in consternation in the police chief&#8217;s office.