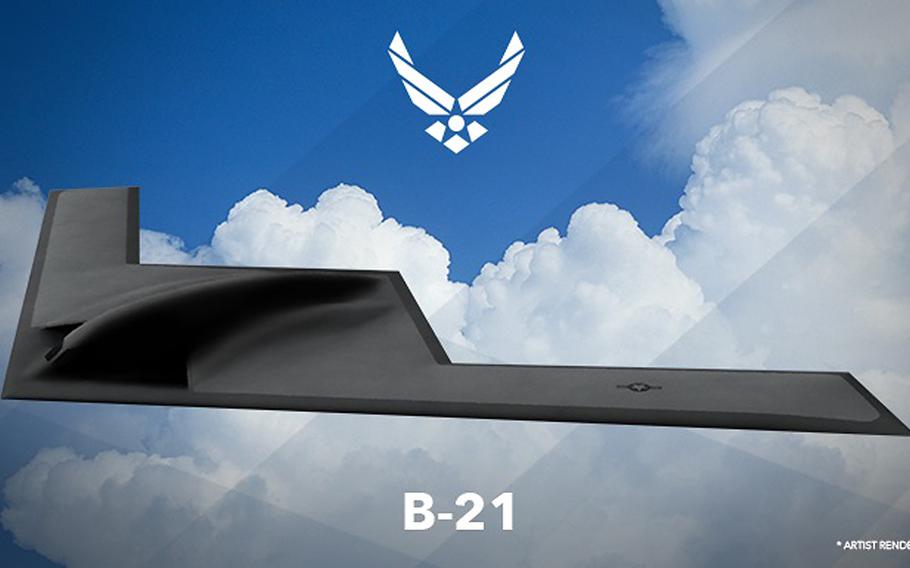 An artist's rendering of the B-21 Long Range Strike Bomber, was unveiled Feb. 26, 2016, at the Air Force Association's Air Warfare Symposium. The Air Force is launching a contest to choose a name for it. ()

KAISERSLAUTERN, Germany — Got a good name for a futuristic stealth bomber that doesn’t yet exist?

If so, the Air Force wants to hear from you.

The service announced this week contest rules for naming the B-21, the future long-range bomber with which the Air Force plans to replace the aging B-52 and B-1 fleets. The program costs an estimated $80 billion for 100 bombers.

Air Force Secretary Deborah Lee James unveiled a conceptual design of the warplane last month and challenged airmen and their families to come up with a name for the B-21, a designation that the Air Force says represents the first bomber of the 21st century.

The naming contest comes ahead of a prototype for the B-21 and amid criticism by some lawmakers over the Air Force’s decision to award Northrop Grumman Corp. a “cost-plus” contract, which could expose the government to cost overruns.

The name contest is on, despite the contract debate: The Air Force will take suggestions for a new name through May 6. Those eligible to participate are active-duty airmen, reservists and Air National Guard personnel and their dependents, as well as Air Force civilians and retirees.

Participants may enter up to three submissions. Proposed names are limited to no more than two distinct words.

The contest isn’t as simple as suggesting a few catchy handles. The Air Force wants participants to include a “justification paragraph” (limited to 200 words) for each suggestion. Justifying the proposed name “will be as important as the name in the review and score process,” officials said.

Entries deemed inappropriate, indecent, obscene, hateful, slanderous or libelous or thought to promote any form of discrimination or racism will be tossed out.

Stratofortress, Spirit and Lancer — the respective names of the B-52, B-2 and B-1 bombers — are presumably off the table.

There’s no shortage of ideas on social media. Suggestions left on Stars and Stripes’ Facebook page run the gamut, from the militaristic, such as “Annihilator” and “Scorcher,” to the irreverent “Gotcha” and “The Willies.”

Some suggestions with political undertones probably won’t make the cut, such as “the trumpnator,” “Moneytaker” and “The Obama.”

James and Air Force Chief of Staff Mark A. Welsh III will approve the winning entry from the top 10 finalists determined by a panel of judges, which is composed of staff from Global Strike Command and Headquarters Air Force.

What’s the prize? The prestige of naming the Air Force’s newest bomber, officials say. The person who submits the winning entry may also get to attend the Air Force Association’s Air and Space Conference and Exhibition in Maryland in the fall, to be acknowledged by Air Force leadership.