Bastogne: Town was 'nuts' even before McAuliffe's celebrated response 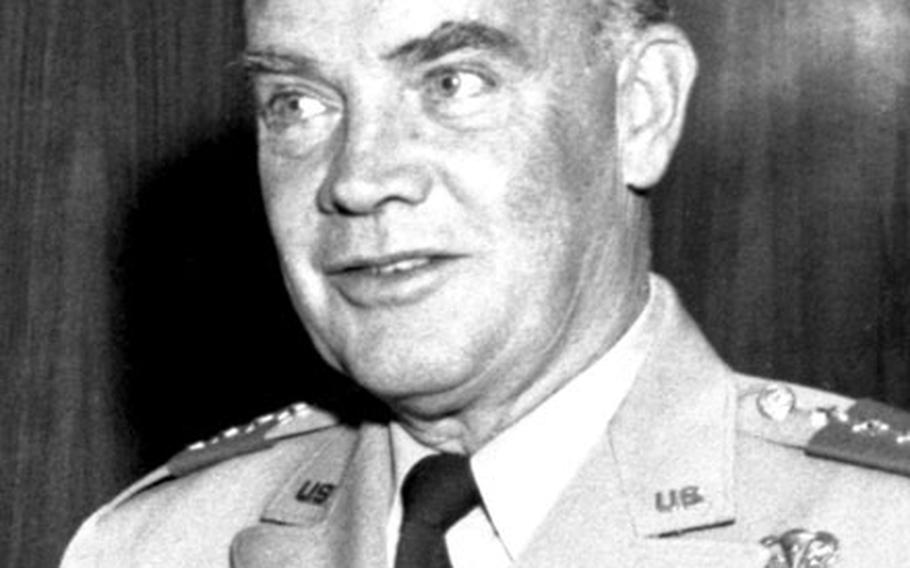 Gen. Anthony C. McAuliffe, one of the heroes of the Battle of the Bulge, as EUCOM commander-in-chief in 1955. (Ted Rohde / S&S file photo)

BASTOGNE, Belgium &mdash; Forgive the people of Bastogne for being a bit nutty this weekend.

For starters, hundreds of American World War II veterans came to town to mark the 60th anniversary of the Battle of the Bulge, the single biggest battle ever fought on the Western Front.

Belgians deeply appreciate the Americans who liberated them from Nazi Germany, and then beat back the massive counteroffensive launched six decades ago.

Then there is the tale of U.S. Army Brig. Gen. Anthony McAuliffe and his famous one-word reply to a German general&rsquo;s surrender demand: &ldquo;Nuts!&rdquo;

&ldquo;We were actually discussing that,&rdquo; Air Force Senior Airman Ben Secrest, from Spangdahlem Air Base, Germany, said of the story as he stood in the town square named after McAuliffe. &ldquo;I don&rsquo;t really know the story.&rdquo;

But what even more people don&rsquo;t know is that Bastogne had a thing for nuts well before McAuliffe and his men rolled into town.

Back in the 18th century, farmhands, cow tenders and shepherds would flock to Bastogne for the annual Nut Fair, the last fair of the season. It was here they would look for work for the coming year.

If successful, the man would buy sweet breads and nuts for his girlfriend or fianc&eacute;e, which represented a token of his affection and capacity to provide for her.

Today the festival is much more about tradition than labor.

On Saturday, as is the custom every year, handfuls of walnuts &mdash; now imported from California &mdash; were thrown from a town hall balcony to the crowd below. The king of Belgium, a granddaughter of Gen. George S. Patton Jr., and a couple of U.S. war veterans had the honors this year.

Guadalupe Flores Jr., an 80-year-old veteran of the battle, wasn&rsquo;t on the balcony Saturday, but he was in the Bastogne during the siege as a member of the 101st Airborne Division.

&ldquo;I happened to be in the area when the Germans came asking us to surrender,&rdquo; Flores said, as he recounted the scene, which featured four German men waving a makeshift white flag.

Carl Dalke was also in the area for the nutty exchange on Dec. 22, 1944, between McAuliffe and the German commander, Gen. Heinrich von Luettwitz.

&ldquo;The Germans wanted to know what the phrase &lsquo;nuts&rsquo; was all about,&rdquo; Dalke said. &ldquo;McAuliffe was basically telling them to &lsquo;go to hell.&rsquo; The Germans tried to send us there Christmas Eve, but we stopped them.&rdquo;