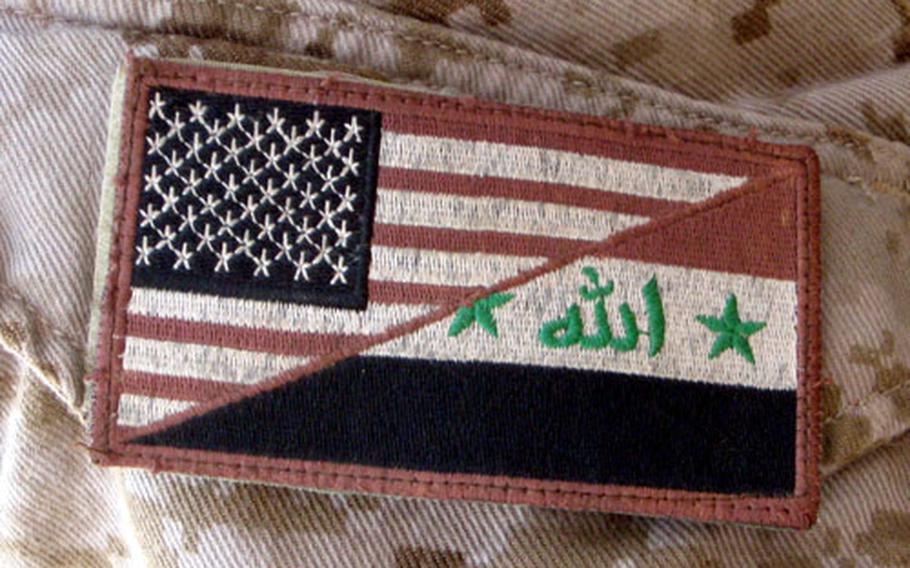 Some Marines with military transition teams assigned to 2nd Quick Reaction Force, 1st Iraqi Division, wear this patch on their uniforms to show the partnership they have with the Iraqi units they advise. (Cindy Fisher / S&S)

Some Marines with military transition teams assigned to 2nd Quick Reaction Force, 1st Iraqi Division, wear this patch on their uniforms to show the partnership they have with the Iraqi units they advise. (Cindy Fisher / S&S) 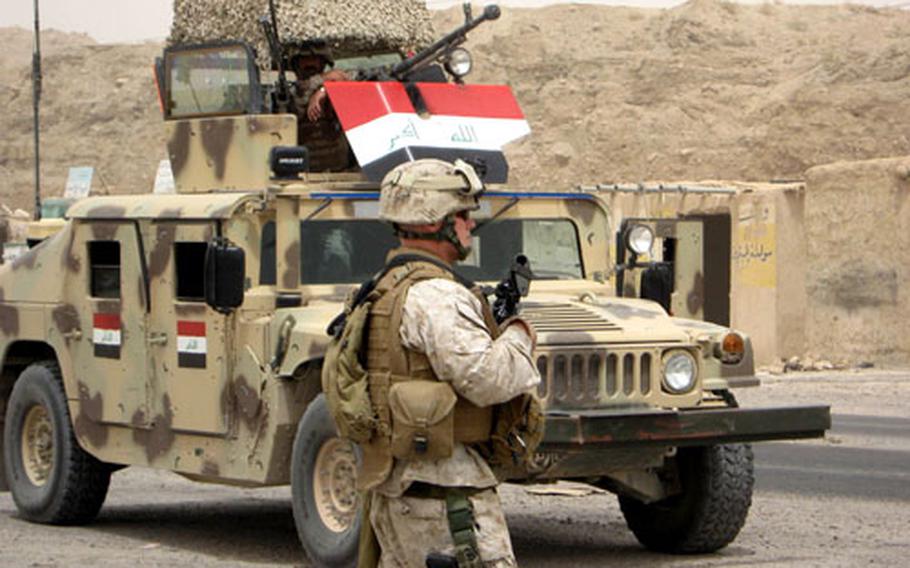 A Marine advisor helps provide security during a patrol conducted by the Iraqi soldiers of 3rd Battalion, 2nd Quick Reaction Force, in Dradigila in Anbar province Wednesday. Some of the battalion&#39;s senior officers meet with locals and stopped in at the Iraqi police station during the patrol. (Cindy Fisher / S&S) 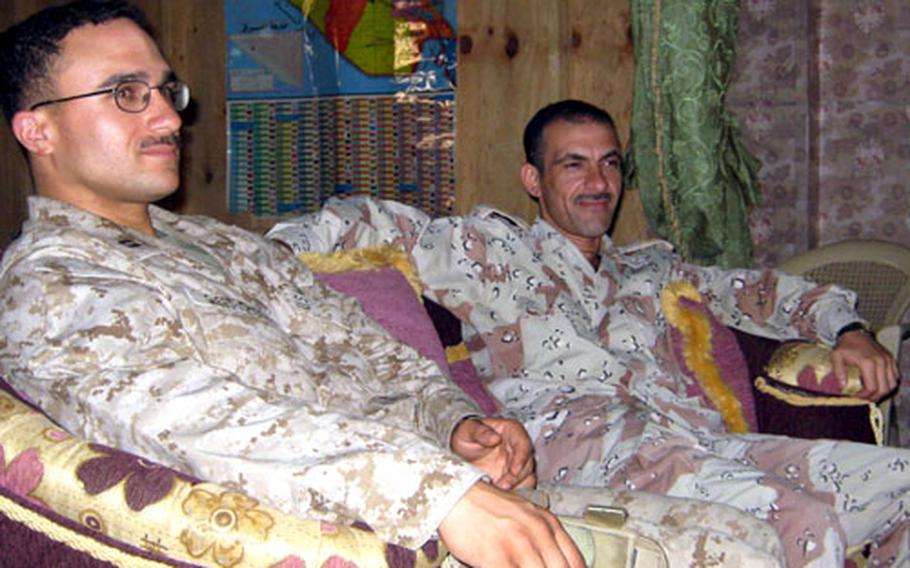 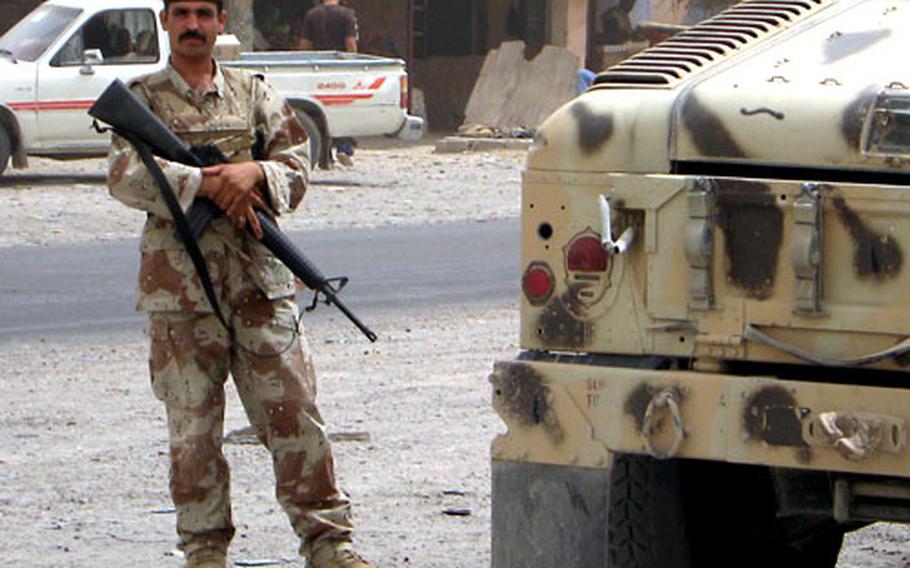 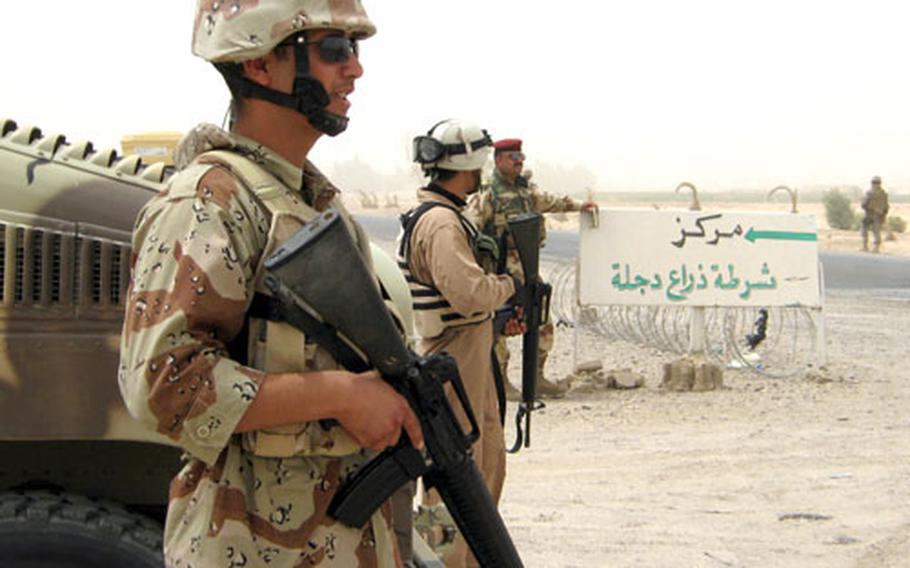 ANBAR PROVINCE, Iraq &#8212; Developing the Iraqi army to the point that it operates independently of coalition forces is essential &#8212; not only to prop up the Iraqi government, but also to allow U.S. troops to leave the country, military officials have long said.

To do that, small military transition teams have been living, eating and sleeping with units of the Iraqi army for the last few years. They began by teaching Iraqis the basics of being soldiers.

That&#8217;s what some enlisted Marines assigned to a MiTT advising the 2nd Quick Reaction Force, 1st Iraqi Division thought they would be doing.

"I was told I was going to train the Iraqi army specifically on machine guns," said Lance Cpl. Erik Tirado, 27, a machine gunner from Jacksonville, Fla., who is part of a team advising the reaction force&#8217;s 3rd Battalion at Manion Combat Outpost near Dradigila.

But that has not been the case. The Iraqis have shown enough progress that the Marines have been going out with them on patrols and exercises. And in some cases, the Iraqis are taking over the operations.

"We are so far beyond training," said Lt. Col. Sean Riordan, 37, from Emerald Isle, N.C., the senior adviser for the team assigned to the quick reaction force staff at the Iraqi base near Camp Fallujah. A team is also assigned to the brigade&#8217;s 2nd Battalion at Halwas Combat Outpost.

The teams are now focusing on developing "the coalition-independent capabilities of the Iraqi army," he said.

Riordan said the Marines have encountered some difficulties working with the Iraqi army. One is the language barrier.

Pfc. Zach Young, 21, an infantry Marine from Pittsburgh assigned to the 3rd Battalion&#8217;s MiTT team, said he attended a four-week course in Arabic before the deployment. "The only problem was it was a Saudi dialect. The Iraq dialect is a little different," Young said.

Cultural differences have also caused some frustration for the Marines. Transition teams have to understand the Iraqi military customs and how it affects what they do, Riordan explained.

"Take, for example, leave," he said. Once a month the Iraqi soldiers take leave to take their pay to their families and make sure they are still safe, he said.

Team advisers also find themselves working as advocates for the Iraqi army. "Sometimes coalition intentions don&#8217;t line up with Iraqi intentions," Riordan said. So the advisers do a balancing act to bring them closer together.

Despite the difficulties, there have been marked improvements here, he said.

In September 2007, the Iraqi brigade accepted responsibility for its own operating area in the northernmost portion of Anbar province. The mostly desert area with a few homes and small villages was once a haven for insurgents, Riordan said. "They lived in this area and knew we couldn&#8217;t get there," he said of the insurgents.

Just two weeks ago, one Iraqi patrol found 400 gallons of explosives in a house, he said. The brigade also worked with Iraqi police and nearby coalition forces to increase security in the region, Riordan said.

The brigade has regained the trust of the local people, said Brig. Gen. Ali, the brigade&#8217;s commander. He and other Iraqis are often identified only by part of their names because Iraqi soldiers and their families are still being targeted by insurgents. Some officers have to move their families several times a year to keep them safe.

The change in attitude about the Iraqi army is due to how the brigade operates, Ali said.

"When we detain suspects, we treat them well. We help people: food, medical operations, help at schools.&#8230; We kill insurgents and we know the difference between insurgents and civilians," he said.

The Iraqi soldiers also have learned to identify with the army, so they bring neutrality to the area, said Capt. Anthony Guess-Johnson, 33, from Pasadena, Calif. People know the brigade is not operating with any faction or party agendas, said Johnson, senior adviser for the team assigned to 3rd Battalion.

Iraqi officers meet with the heads of tribes to know the people of the area, and locals have begun asking for more Iraqi soldiers to come here, Johnson said. As they have gained control of the area, people have returned and businesses have reopened, Iraqi soldiers say.

"I feel safe now," said an auto parts store owner in Dradigila, who did not want to be identified. Before, he couldn&#8217;t keep his business open and had difficulty feeding his family due to the insurgent activity in the area, he said.

The Iraqi army is building on its success by taking over the planning of its patrols and operations and the managing of the area, Riordan said. They are getting to the point where they can do independent operations, he said.

Last week, the brigade put into motion the first operation in a three-phase plan against insurgent activity that they developed and will execute mostly on their own, he said. Coalition forces are just helping the brigade with technological and air capabilities, he said.

As a result of the Iraqi success, team advisers have backed off and act only as coaches, Riordan said. "We try to the best of our ability not to do their jobs," he said.