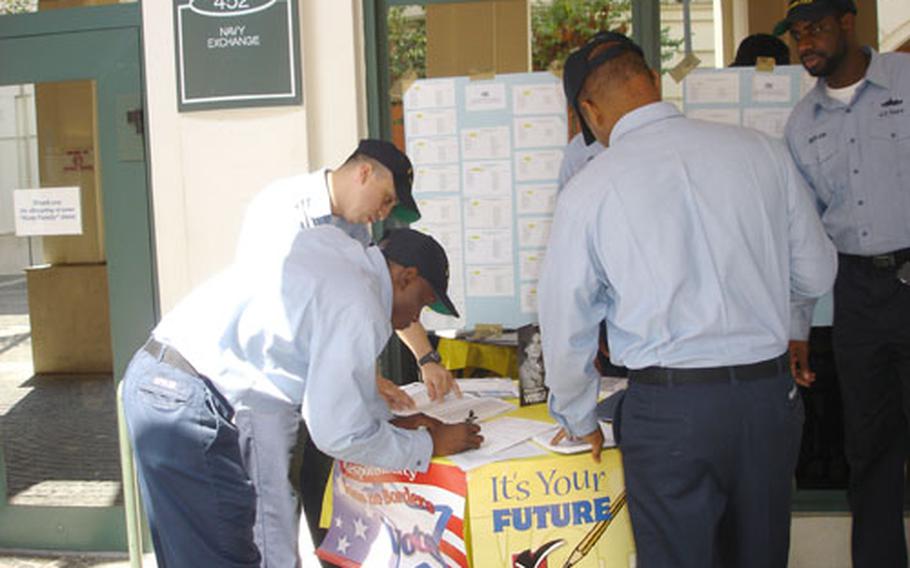 Although there have been problems in past elections with how absentee ballots have been handled, officials at bases in Italy and Spain say improved training and earlier distribution of materials will help ensure everyone who wants to vote can.

"We started in February with our training," said Petty Officer 1st Class Richard McClain, an installation voting assistant on Capodichino. "By June, we had tables set up with information and applications for absentee ballots. We registered more than 400 voters at the Festa Americana celebration over July 4th weekend."

Most commands have volunteers that provide ballot applications, along with information on state-by-state requirements.

"The whole process takes about 45 days," McClain said "So we really need to get everyone that&#8217;s eligible registered by mid-September. This is important, because our vote counts too."

In Rota, Spain, volunteers are expecting to sign up at least 200 more voters by the end of the week.

"We&#8217;ve already got 175 signed up so far," said Lt. Chris Shetter, the installation voting assistance officer for Naval Station Rota. "We&#8217;ve put spots on radio and TV, and we have a table set up at the Navy Exchange and at our Single Sailor Center."

Getting the information out is only part of the process. Since the 2004 election, incoming and outgoing election materials are now more carefully handled by the U.S. postal system, according to Jeffrey Gibbs, Fleet & Regional Postal program manager in Sigonella, Sicily.

"There has been a lot more education and training for anyone involved in the process, from the voters to the mail personnel that process the ballots," Gibbs said.

Military post offices now bundle voting materials separately, so when they arrive at the postal sorting centers in the United States, they are easily identifiable as date-sensitive election materials. All Defense Department postal facilities now have reporting requirements for the total number of ballots received, including how many are delivered and how many have to be re-directed because of address changes, according to Gibbs.

"Ballots are sent first-class mail, and the week before the election, they&#8217;re upgraded to Express Mail via USPS," Gibbs explained. "Also, if non-military citizens are overseas and they want to mail a ballot, they can do so at any U.S. military installation. It&#8217;s the only time non-military affiliated citizens can use a military post office."

Provisions will be made allowing citizens to use the postal facilities, officials say.

For more information on overseas voting, go to http://www.fvap.gov