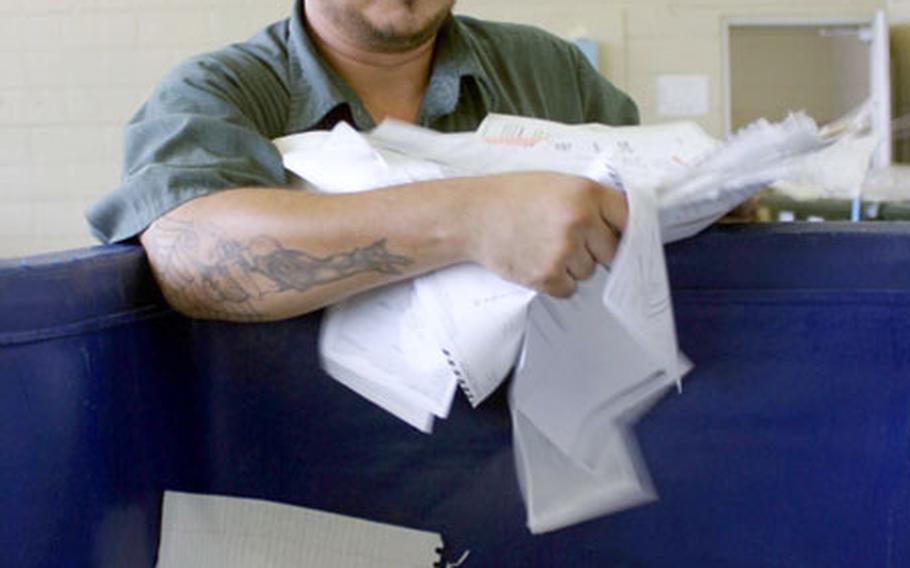 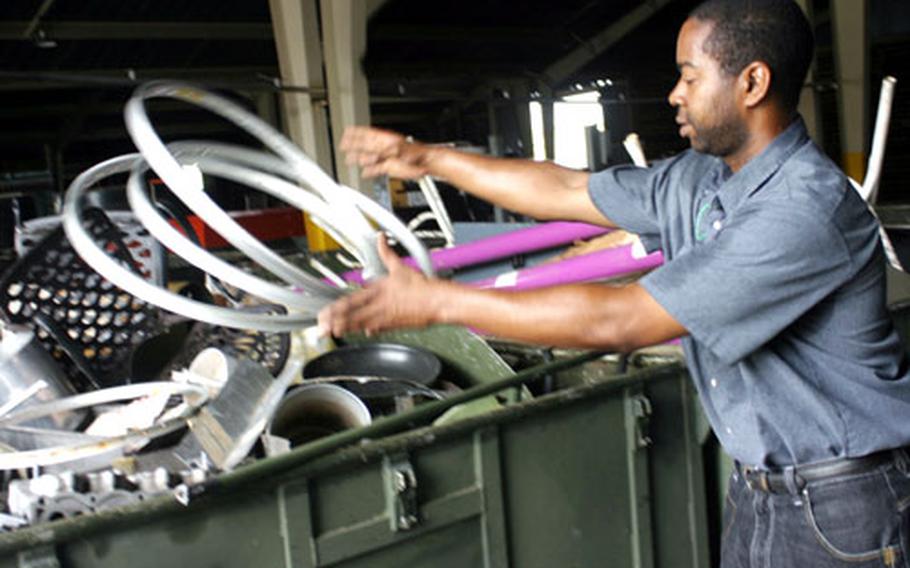 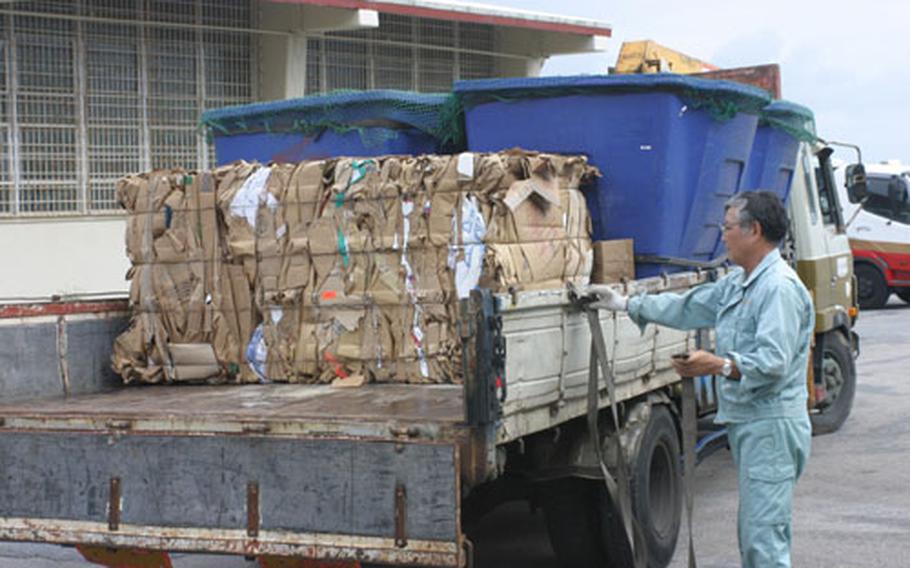 Takeo Higo, a materials handler for Recycle Center Okinawa, uses straps to tie down bundles of cardboard and bins of paper at the Foster Recycle Center, Thursday. (Mark Rankin / S&S) 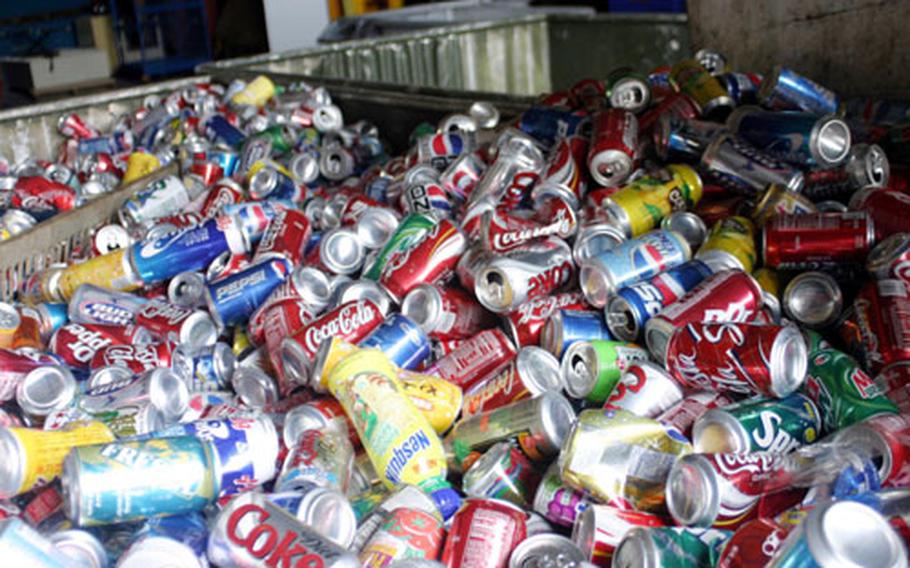 A pile of aluminum and tin cans being readied for recycling at the Foster Recycle Center, Thursday. (Mark Rankin / S&S) 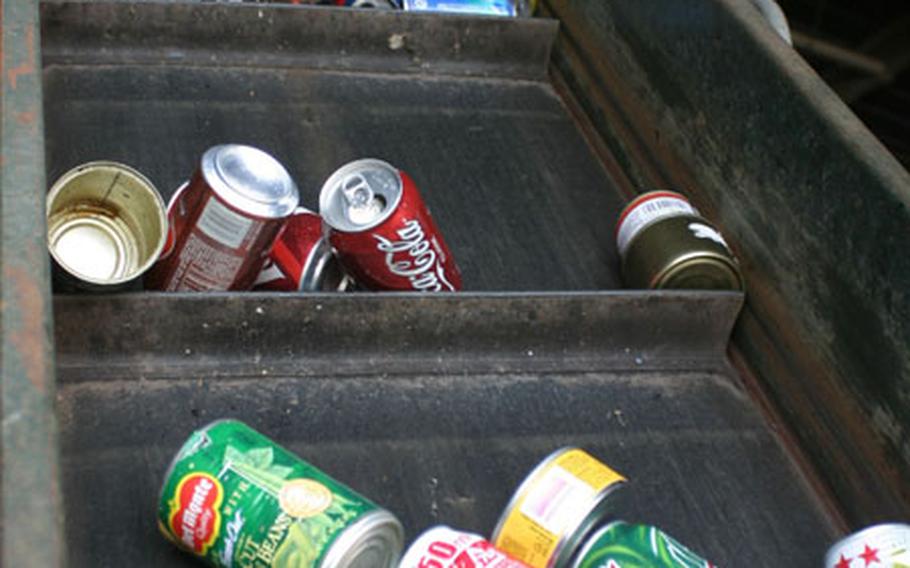 Aluminum and tin cans ride a conveyor to be separated into recycle bins at the Foster Recycle Center, Thursday. (Mark Rankin / S&S)

CAMP FOSTER, Okinawa Island officials have been talking trash with U.S. base officials, claiming base residents toss out twice as much garbage per capita as Okinawans.

Citing a looming landfill crisis, the prefecture wants the bases to recycle as much as possible to slash trash hauled to the dumps.

But convincing base residents to recycle has become a tough sell. Despite the base having one of Okinawa&#8217;s largest recycling operations, residents are not doing their part, says the man in charge of Camp Foster&#8217;s recycling center. &#8220;Only 8 percent of base residents separate their trash,&#8221; said Daryl Avery.

But recycling rules are way too confusing, base residents counter, with trash to be separated up to eight different ways.

Avery said the Marine Corps Community Services Foster Recycle Center he supervises recycles everything the prefecture suggests: aluminum and tin cans, cardboard, newspapers, office and other paper, glass and large objects such as metal barbecue grills and old lawn chairs. And on June 1, the MCCS operation, which other island services contract to pick up their recyclables, also started collecting polyethylene terephthalate plastic bottles &#8212; those marked &#8220;PET.&#8221;

In June the Okinawa Prefectural Waste Management Office formally asked the U.S. military on Okinawa to reduce trash from its bases hauled to local landfills. In 2001, the office said, the bases daily generated almost 2.5 times the daily household garbage per capita of the Okinawa community &#8212; 2.3 grams compared to 0.9 gram.

MCCS estimates the average person produces an average of four pounds of trash daily &#8212; almost 1,500 pounds a year &#8212; much of it recyclable. Since 1999 recycling has been mandatory for all U.S. bases but with residents have no incentive other than good citizenship to separate their trash, enforcement has been a problem.

That may change soon.

Chip Steitz, Kadena Air Base spokesman, said the Air Force, which manages all base housing on Okinawa, is drafting new guidance for residents. &#8220;This regulation will model our trash collection system after the efficient system used by local Okinawan townships,&#8221; he said. &#8220;Specifically, this regulation will require personnel to sort trash as burnable, non-burnable, or recyclable.&#8221;

&#8220;It is estimated that Kadena currently pays approximately $2 million to dispose of waste that is not generated by base residents or by DOD facilities,&#8221; he said. &#8220;Enforcement of this policy will significantly reduce the amount of garbage disposed of by the Air Base.

&#8220;Members from our leadership and our Environmental Office have met with the Okinawa Prefecture Government,&#8221; he said. &#8220;We appreciate their suggestions and we look forward to improving our solid waste management.&#8221;

He said recycling, mandatory for all DOD personnel since February, 1998, will be enforced beginning in September &#8220;once we have all infrastructure in place.&#8221;

Now, base residents say, recycling can be confusing. To protect workers who process the recyclables at the two collection points, the centers require that trash be separated before pick-up into up to eight different categories. For paper products alone, newspapers, office paper, cardboard and magazines must be separated. Caps and labels must be removed and food rinsed from all jars and cans.

Kim Howell, a base housing resident and mother of three, said she tried recycling months ago but became frustrated when some items were left at the curb because they were improperly sorted and bagged.

In most Okinawa communities, recycling is mandatory; local stores sell colored bags for burnable and non-burnable trash. Bins are provided for other recyclables, such as cans and glass.

Even with base residents&#8217; low participation, MCCS recycling diverted 4,561 tons of trash from island landfills in 2003, collecting $257,597 from Okinawa recyclers.

An official of Kurashiki Waste Management Service, one of the firms contracted to make regular base trash pick-ups, agreed that if everyone sorted trash properly, &#8220;70 to 80 percent of the trash from the bases could be recycled.&#8221;

Takeo Higo, a materials handler for Recycle Center Okinawa, said he noticed an increase in the amount of paper his company buys from the MCCS operation. &#8220;It&#8217;s very good to see the people on the bases doing so much to recycle and save the earth&#8217;s resources,&#8221; he said.

Visit the MCCS Recycling Web site at www.okinawa.usmc-mccs.org/mccs1.asp?id=311 for more information on recycling, including pick-up schedules and tips on how to separate trash. Or call the Foster Recycle Center at 645-3139 or the Kadena Recycle Center at 634-2833.

The Recycle Centers on Camp Foster and Kadena Air Base are open from 7:30 a.m. to 4:30 p.m. Monday through Friday.

Items that are recyclable include No. 1 and No. 6 PET plastic bottles, aluminum and tin cans, cardboard, newspapers, office paper, magazines, computer paper, glass, miscellaneous metal items and larger items such as lawn chairs and lawn mowers.

Items may be dropped off at the centers or placed at the curb for weekly pick-up. For information on when recyclables are picked up in your neighborhood, call Kadena Recycle at 634-2833 or Foster Recycle at 645-3139.

Prior to pick-up, the following steps should be taken: