Chris Manis, deputy director of installations and logistics at Marine Corps Air Station Miramar, Calif., prepares to plug a Chevrolet Volt into one of the base&#39;s four charging stations for electric vehicles. Miramar received two Volts in July 2012 and plans to field a fleet of electric vehicles. (Melissa Eschenbrenner/Courtesy of the U.S. Marine Corps)

Chris Manis, deputy director of installations and logistics at Marine Corps Air Station Miramar, Calif., prepares to plug a Chevrolet Volt into one of the base&#39;s four charging stations for electric vehicles. Miramar received two Volts in July 2012 and plans to field a fleet of electric vehicles. (Melissa Eschenbrenner/Courtesy of the U.S. Marine Corps) 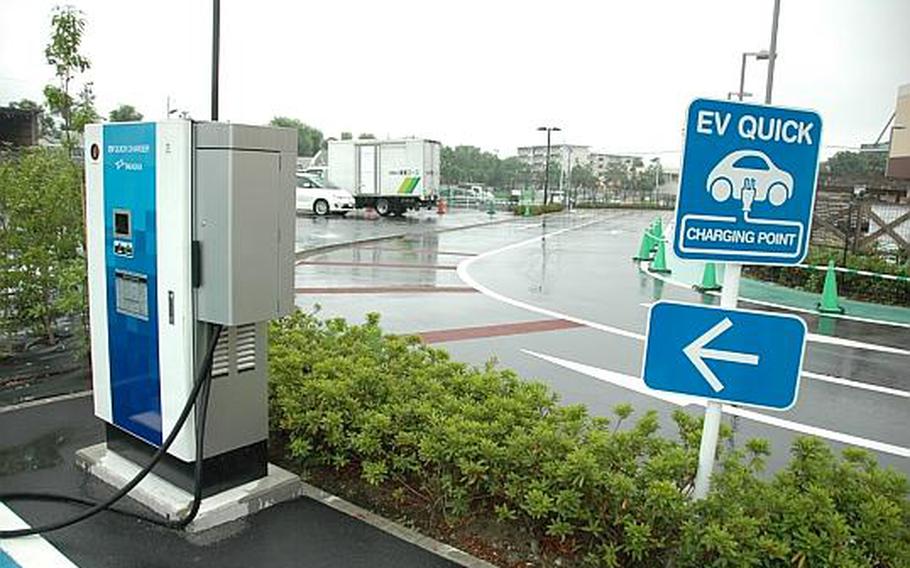 U.S. military bases are beginning to install charging stations for government-owned electric vehicles, but privately owned EVs often cannot be charged at on-base housing facilities. In Japan, servicemembers with EVs can charge the vehicles at off-base charging stations such as this one near Yokota Air Base. (Seth Robson/Stars and Stripes)

YOKOTA AIR BASE, Japan &mdash; The Department of Defense may soon encourage private companies to fund quick-charge points on military bases so servicemembers can juice up personal electric cars.

Off-base &ldquo;quick-charge points&rdquo; are proliferating near military facilities in California, Hawaii and Japan, and bases have started to install their own chargers to cater to a growing armada of battery-powered official vehicles.

Now the military is looking at ways to support servicemembers who buy or lease electric vehicles such as the Chevy Volt, Tesla Roadster and Nissan Leaf.

Electric cars can be plugged into a conventional power outlet to recharge overnight; a quick-charge point can recharge 80 percent of an electric vehicle battery&rsquo;s power in less than 30 minutes.

&ldquo;Efforts are currently under way to identify third-party financing strategies or developing a &hellip; business case to support POV charging,&rdquo; she said.

Bob Larson, a defense contractor who works with battle command systems at Aberdeen Proving Ground, Md., said he leased one of the first Volts off the production line in 2010 and plugged it into a power outlet at Fort Dix, N.J., a few times before officials told him to stop.

&ldquo;They said it was misappropriation of funds,&rdquo; he said.

The Government Accountability Office determined in 2010 that appropriated funds couldn&rsquo;t be used to install charging stations for electric POVs at the Capitol in Washington, D.C., Racasner said.

However, in Japan, where numerous quick-charge points are available near U.S. military facilities, some people can charge POVs with the free electricity they get at their on-base homes.

Yokota Air Base lets residents do that if there&rsquo;s a power outlet within five feet of a parking spot.

&ldquo;For safety reasons, we don&rsquo;t want extension cords plugged in for extended periods across long distances, especially if they cross over sidewalks and grassy areas. They present a tripping hazard and could be unintentionally damaged by lawn care equipment, presenting a shock or fire hazard to residents.&rdquo;

Yokosuka Naval Base officials recommended against charging electric vehicles at on-base housing while the Navy evaluates the potential impact.

&ldquo;Servicemembers with EVs (electric vehicles) would be asked to use charging stations furnished by Japanese gas stations and at stores, located outside the gate, that require payment for the service,&rdquo; said Sean Dath, a Yokosuka spokesman.

The extra power drain could require upgrades to base electricity grids, Racasner said.

&ldquo;These are the same issues electrical utilities are currently navigating,&rdquo; she added.

Back in New Jersey, Larson said he&rsquo;d happily pay to charge his Volt if a facility was available on-post. A full charge costs about $2 at his home, he said, adding that rates differ across the country.

&ldquo;The governments has all sorts of programs to encourage green energy use, so even if they offered it (on-base charging) for free, it is not a big expense and it is a way to encourage that technology,&rdquo; he said.

One organization that doesn&rsquo;t appear interested in providing on-base quick-charge points is the Army and Air Force Exchange Service.

&ldquo;There are currently fewer than 15,000 electric vehicles on the road in the entire United States, and J.D. Powers & Associates reports they expect all electric vehicles to account for less than 1 percent of U.S. auto sales through at least 2018,&rdquo; the officials said by email.