Bases in the U.K. to hold late-evening Super Bowl parties, allow sleeping in the next day 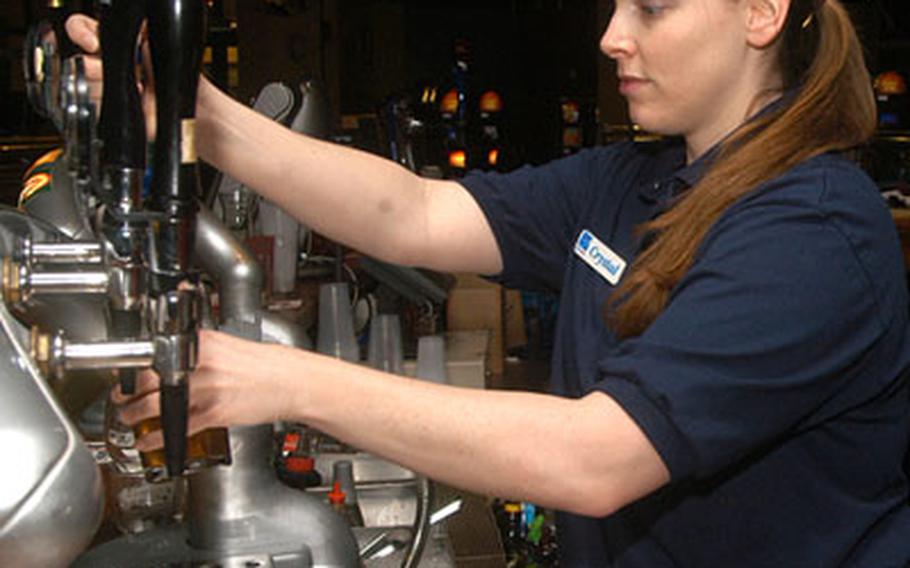 Bartender Crystal Adams pours a pint of beer inside RAF Mildenhall&#39;s Galaxy Club, which will hold a party for this year&#39;s Super Bowl. (Sean Kimmons / S&S)

Bartender Crystal Adams pours a pint of beer inside RAF Mildenhall&#39;s Galaxy Club, which will hold a party for this year&#39;s Super Bowl. (Sean Kimmons / S&S) Bartender Jennifer Abrego stands next to Liberty Club&#39;s stock of kegs, which will come in handy when the club holds their Super Bowl party. (Sean Kimmons / S&S) Being five hours ahead of Eastern Standard Time, those stationed in the United Kingdom will have to wait until 11:30 p.m. on Sunday to see how the Super Bowl XLI match-up between the Chicago Bears and Indianapolis Colts unfolds.

The late game shouldn&#8217;t pose too much of a problem for most fans, though, since commanders at U.S. Air Force bases across the U.K. are authorized to allow airmen to report to work up to four hours later than usual. Civilians have the choice of taking a leave day Monday, according to a U.S. Air Forces in Europe spokeswoman.

&#8220;Delayed reporting provides the opportunity for many to watch the game in its entirety, with time to get adequate rest to report to work safely,&#8221; Capt. Jennifer Lovett wrote in an e-mail to Stars and Stripes.

Air bases also are holding Super Bowl parties, with food, drinks and prize drawings, to give fans a place to watch America&#8217;s most popular sporting event.

Crystal Adams has bartended many of these parties while working at RAF Mildenhall&#8217;s Galaxy Club.

Last year, the G-Club was packed with fans, Adams said. She expects more of the same this year with fans huddled around two big screen TVs and several other TVs found throughout the bar.

Airman 1st Class Chris Ellis, a patrolman for the 100th Security Forces Squadron, will watch the game at the G-Club with friends, he said.

At RAF Lakenheath, the Liberty Club will be showing the game in three rooms. Also, next door, the 48th Avenue community center will be hosting a chili cook-off competition as part of the festivities.

Jennifer Abrego, who will be one of seven bartenders serving crowds at the L-Club, said the ballroom should be filled with people because of its two big screens and a live disc jockey playing music during commercials.

For those who would rather stay at home, the American Forces Network, as well as the Sky Sports 1 and ITV1 channels, are scheduled to broadcast the game live.

&#8220;It&#8217;s basically an American holiday,&#8221; Staff Sgt. Bradley Moorer, an electrician for the 95th Reconnaissance Squadron, said about the game. He plans to catch it on AFN in the comfort of his home, he said.

Others planned to do the same.

In the game, airing live from Miami, a high-octane Colts offense, ranked third in the regular season, will face a stingy Bears defense that finished the season fifth overall. The halftime show will include a performance by Prince.

RAF LakenheathLocation: Liberty Club.What will be there: Live DJ, food and drink specials, prizes and cash giveaways.Time: Starts at 9 p.m.

RAF MildenhallLocation: Galaxy Club.What will be there: Live DJ, food and drink specials, and prizes.Time: Starts at 8 p.m.

RAF Menwith HillLocation: Club ballroom.What will be there: Drink specials and prize drawings.Time: Starts at 9 p.m.

RAF CroughtonLocation: Consolidated Club.What will be there: Buffet, drink specials and prize drawings.Time: Starts at 9 p.m.