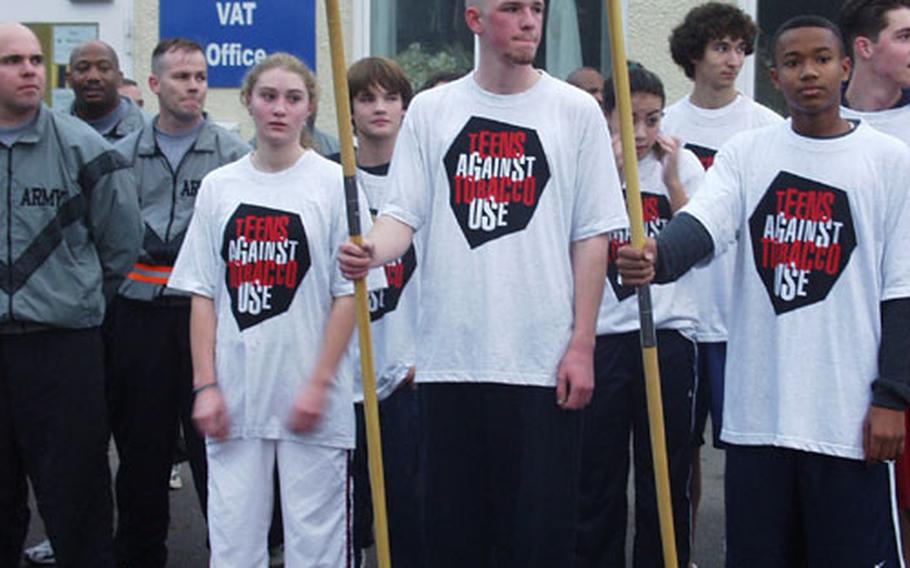 The Great American Smokeout, held for the 27th time and begun by The American Cancer Society, is touted as a day for tobacco users to stop their habit for 24 hours, and then use that as a first step to quitting the use of tobacco products.

Despite the push to eliminate smoking and other forms of tobacco use such as chewing tobacco and snuff, military members light up just as often as people not in the armed services.

Between 26 percent and 28 percent of people use tobacco products, she said, and American troops follow that statistic.

Gorham noted it might be easier to smoke in the military than in a civilian environment.

Military spouse Erin Collins, 32, who has smoked since she was a teen-ager, decided to give quitting a shot this week.

The problem, Collins said, is to make a new habit out of not smoking.

This time, Collins said, she has enlisted several of her friends to help.

Ralph Blair, a Morale, Welfare and Recreation worker in Heidelberg, has smoked for 20 years and said he won&#8217;t change his habit this week, nor does he plan to stop smoking.

Stuttgart and the 6th ASG have become one of the toughest nonsmoking communities in the military. Months before a U.S. law took hold that barred smoking within 50 feet of federal buildings, the 6th ASG instituted the policy on its own. The MWR clubs and slot machine rooms went smoke-free, as did all offices. There were not even smoking lounges for smokers, shifting people to smoke outside.

Information tables were set up to promote nonsmoking tricks, and lollipops were distributed to fight the oral fixation of sticking a cigarette in one&#8217;s mouth.

Those activities are similar to what was held in other military communities.

At the 415th Base Support Battalion in the Kaiserslautern/Landstuhl area, the Kleber Clinic held a breakfast with a speaker who talked about the benefits of a smoke-free lifestyle.

Baumholder held a free bowling night at the Baumholder MWR Bowling Center, which is smoke-free.

The 100th ASG in Grafenw&#246;hr, Vilseck and Hohenfels had a booth at the post exchange where people gave out no-smoking &#8220;survival kits,&#8221; lollipops and stickers.

Army Pvt. Adrian Royster, assigned to the 587th Signal Company in Stuttgart, attended the 6th ASG&#8217;s fun run to support his company and to urge his co-workers to give up smoking.

&#8212; Stars and Stripes reporter Rick Scavetta contributed to this report.