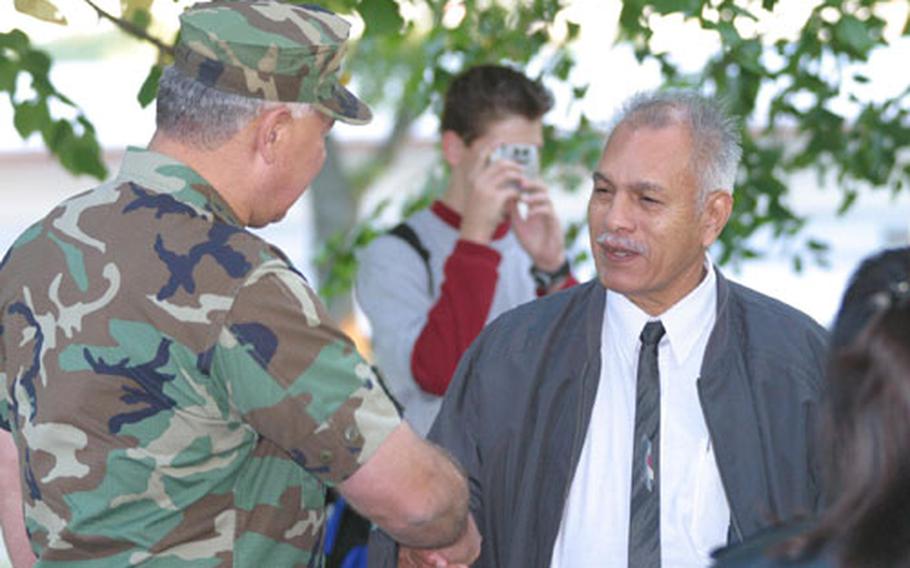 STUTTGART, Germany &#8212; About 125 people attended a ceremony in Stuttgart on Friday to mark POW/MIA Remembrance Day.

The event was one of many being held throughout Europe on Friday.

In Washington Square on Patch Barracks, the headquarters for the U.S. European Command, community members laid several wreaths, listened to prayers and lit a candle at a table with an empty chair, which signified missing servicemembers.

&#8220;We must not lose our resolve,&#8221; Air Force Gen. Charles Wald, EUCOM deputy commander, said during the ceremony.

When Jessica Lynch, the Army private who fell into Iraqi hands during a bungled convoy run, was rescued, Wald noted, there was great enthusiasm and excitement.

That excitement was similar to when a towering statue of ousted Iraqi President Saddam Hussein was toppled in Baghdad.

The ceremony, which began around 7 a.m., was organized by American Legion Stuttgart Post 6.

The Post 6 commander, Fred Wildi, talked about the POW/MIA flag, which has a silhouette of a man and a guard tower. The flag is a reminder that there are thousands of American troops who have never returned from combat.

&#8220;The sweetness of enduring peace has always been tainted by personal sacrifice,&#8221; he said.

The chair, candle and other items were to remind people about the POWs and MIAs, said Charles Craig, chaplain for the American Foreign Legion Post 6.

There was a red ribbon to signify the red ribbons people wear to remember servicemembers who do not return from war. A single rose marked the blood MIAs and POWs may have shed in battle or captivity. An inverted glass noted that the missing cannot toast with their friends.

And an American flag, Craig said, to remember the troops &#8220;who may have given the ultimate sacrifice.&#8221;

Helping to organize the ceremony was the Air Force Sergeants Association Chapter 1697 and the Stuttgart Clan of Motorcycle Enthusiasts.