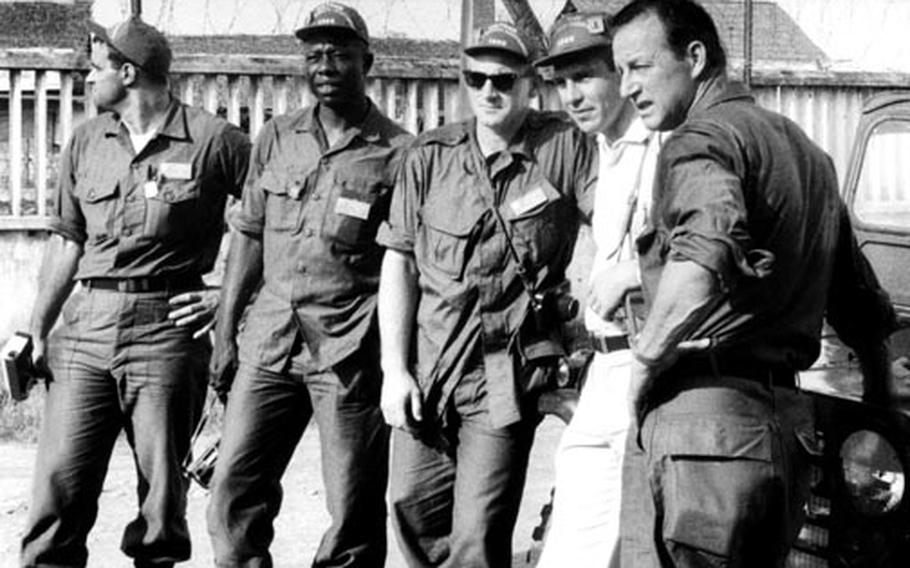 Visiting the U.S. base at My Tho in 1966 are, left to right are Joe Torre and Hank Aaron of the Atlanta Braves, Harmon Killebrew of the Minnesota Twins, Brooks Robinson of the Baltimore Orioles and former St. Louis Cardinals great Stan Musial. (Ray Belford/Stars and Stripes)

SAIGON — Six famous men of baseball are batting 1.000 in morale boosting as they tour the four corps areas of the Republic of Vietnam.

Stan Musial of the St. Louis Cardinals, Joe Torre and Hank Aaron of the Atlanta Braves, Harmon Killebrew of the Minnesota Twins; Brooks Robinson of the world champion Baltimore Orioles and sportscaster Mel Allen are on a handshaking tour of small outposts in Vietnam.

One of their first stops was at My Tho, where they had dinner at the mess hall with men of the 75th Advisory Group. Torre, an airman second class in the Air National Guard, told the men at. his table he felt right in place.

That night, the men of the 75th gathered in the mess mall theater to see a film that the stars had brought with them. With Allen as moderator, the men asked questions of the stars

Musial was asked to comment on the hitting of Ted Williams and to compare Williams with himself. He said that Williams was serious about hitting whereas "I didn't take hitting serious. I just got a lot of hits."

Harmon Killebrew was asked to compare the Los Angeles Dodgers of 1965 — the team that beat the Twins in seven games in World Series play a year ago — with the Dodgers of 1966, who lost four straight to Baltimore.

He quipped, "Well, the Orioles were just playing over their heads this year."

Then he smiled at Robinson and went on to say that the Orioles played the best ball in the American League this year and deserved to win the pennant. He said that the main difference between the two Dodgers teams was in the rest the pitchers had prior to starting the World Series.

After Killebrew. finished, Musial laughed and said, "If the Dodgers can't hit any better than they did in the World Series, I'm going to make a comeback."

The question and answer period was followed by a film of highlights of this year's All-Star game, in which all the visiting players participated. Brooks Robinson was ribbed during the film when the announcer used such adjectives as, "Mr. Impossible" and "magnificent" to describe his fine play in the game.

Col. John Lance, senior adviser, presented the stars with cigaret lighters before they left to visit other Vietnam outposts.