Baseball Hall of Famer Randy Johnson takes a picture of the crowd waiting to meet him at the Wiesbaden main exchange in Wiesbaden, Germany, Wednesday, Sept. 27, 2017. Johnson signed hundreds of autographs for fans in Wiesbaden, home to U.S. Army Europe and Johnson's final stop on a five-day tour of bases across Germany. (Dan Stoutamire/Stars and Stripes)

Baseball Hall of Famer Randy Johnson takes a picture of the crowd waiting to meet him at the Wiesbaden main exchange in Wiesbaden, Germany, Wednesday, Sept. 27, 2017. Johnson signed hundreds of autographs for fans in Wiesbaden, home to U.S. Army Europe and Johnson's final stop on a five-day tour of bases across Germany. (Dan Stoutamire/Stars and Stripes) 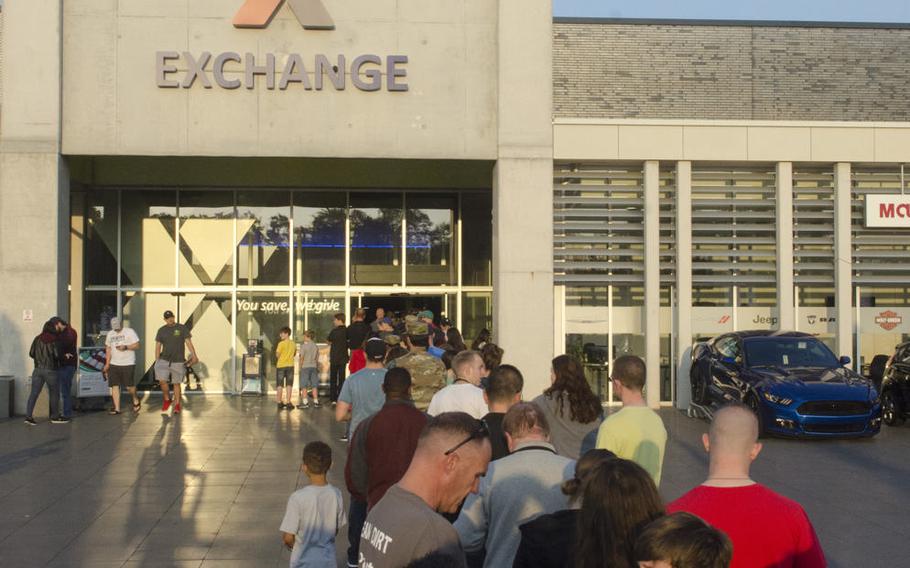 Fans line up to meet baseball Hall of Famer Randy Johnson at the Wiesbaden exchange in Wiesbaden, Germany, Wednesday, Sept. 27, 2017. Hundreds showed up to have their memorabilia signed by the ten-time all-star and five-time Cy Young Award winner, in Germany for five days for a USO tour of several U.S. bases. (Dan Stoutamire/Stars and Stripes)

Hundreds of fans turned out at the Wiesbaden exchange store to get autographs from the pitcher, more than seven years after his retirement.

“I’ve been doing this since 2009, so I’ve been to an array of places, whether it’s Kandahar (Afghanistan) or Iraq or Kuwait or Djibouti,” Johnson said. “And I feel very fortunate that I’ve been able to go there and visit the military, because I get to see what they do.”

Arriving in Germany on Sunday, Johnson also made visits to bases in Ansbach, Ramstein and Spangdahlem.

In Wiesbaden, the line for autographs and photos ran well outside the main exchange’s front lobby, nearly reaching the parking lot. Johnson signed autographs and posed for pictures for more than an hour.

Left-hander Johnson, nicknamed the “Big Unit” because of his intimidating height and his dominating fastball, played for more than 20 years in the major leagues, racking up 4,875 strikeouts, 303 wins and a 3.29 earned-run average.

He was a 10-time All-Star and a five-time winner of the Cy Young Award, which is given to the top pitcher in each league every season. He helped lead the Arizona Diamondbacks to their first-ever World Series win in 2001.

He was inducted into the Baseball Hall of Fame in 2015 by a nearly unanimous vote.

Staff Sgt. Reyder Rivera, an aviation operations noncommissioned officer with U.S. Army Europe, was first in line at the Wiesbaden exchange. He waited more than two hours with his wife, Julissa, to have his Seattle Mariners jersey signed by the baseball great.

“It’s one of the best experiences ever,” said Rivera, a longtime Mariners and Randy Johnson fan.

The pitcher comes from a family with a rich tradition of military service. Johnson said his father served during World War II, and two of his wife’s brothers served in Vietnam. Between 1973 and 1977, his older brother served in Germany at the now-defunct Rhein-Main Air Base.

But that tradition isn’t the reason Johnson routinely tours with the USO, he said.

He recalled visiting the Landstuhl Regional Medical Center, both this week and five years ago.

“Saying thank you to them doesn’t seem like enough considering what they do for us,” Johnson said. “So I think it’s a very small price for me to pay to come over here for a few days and shake hands and smile and joke with them a little bit.”