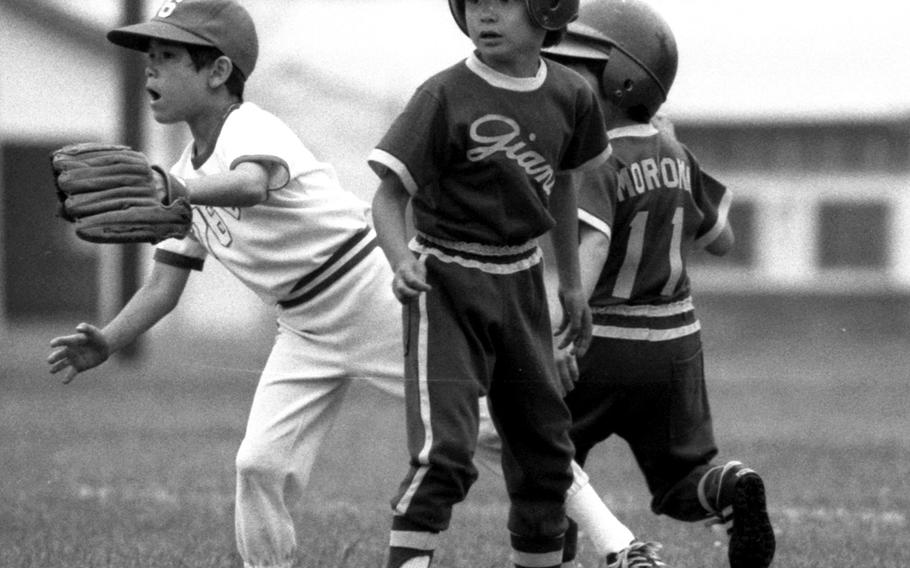 Buy Photo
In the kind of freestyle action often seen in these games, the Giants have both Jason Morioka , foreground, and Tommie Radmillovich on second as Aaron Anothayanotha of the 76ers calls for the ball. (Bob Wickley/Stars and Stripes)

Buy Photo
In the kind of freestyle action often seen in these games, the Giants have both Jason Morioka , foreground, and Tommie Radmillovich on second as Aaron Anothayanotha of the 76ers calls for the ball. (Bob Wickley/Stars and Stripes) 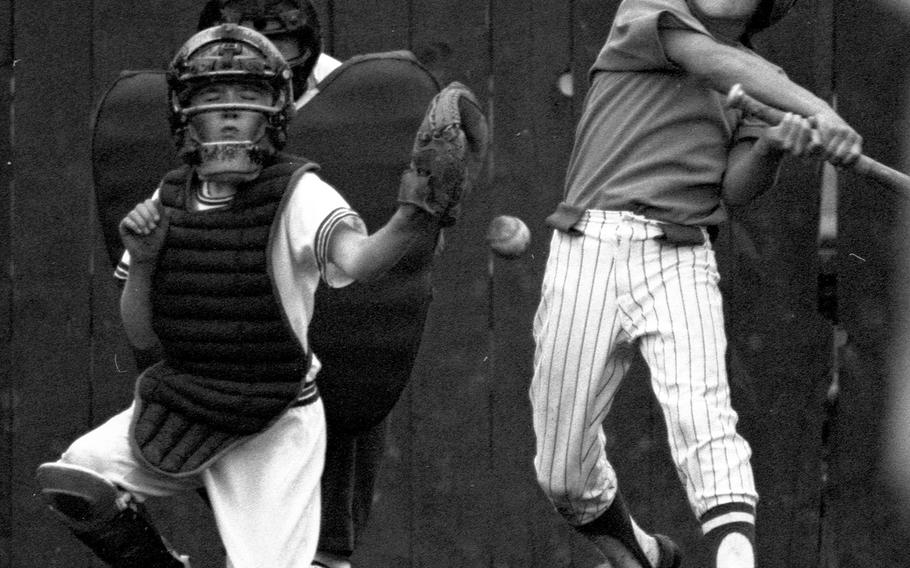 Buy Photo
A healthy cut at the ball as America's national pastime is pursued by members of the U.S. military community in Japan in 1976. (Bob Wickley/Stars and Stripes) 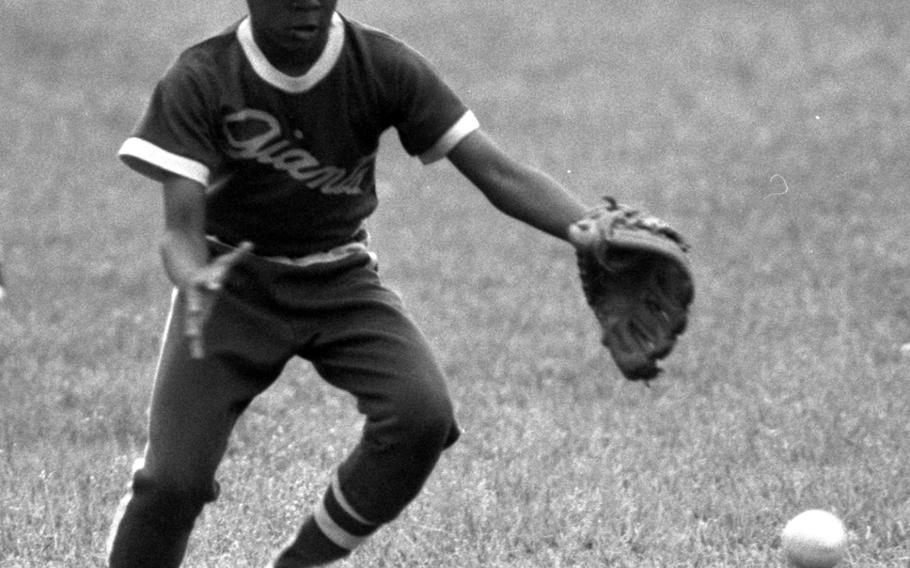 Buy Photo
An infielder focuses on a ground ball. (Bob Wickley/Stars and Stripes) 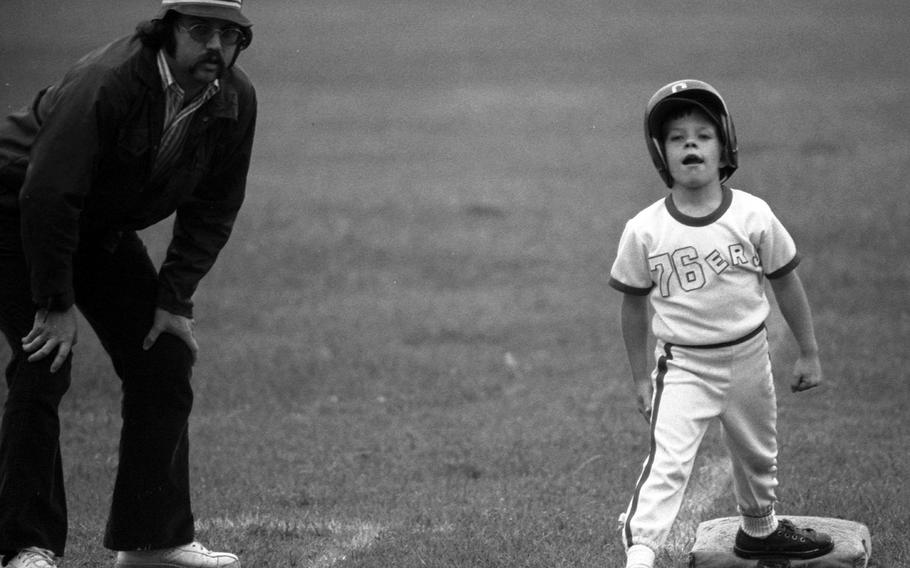 Buy Photo
America's national pastime is pursued by members of the U.S. military community in Japan in 1976. (Bob Wickley/Stars and Stripes) 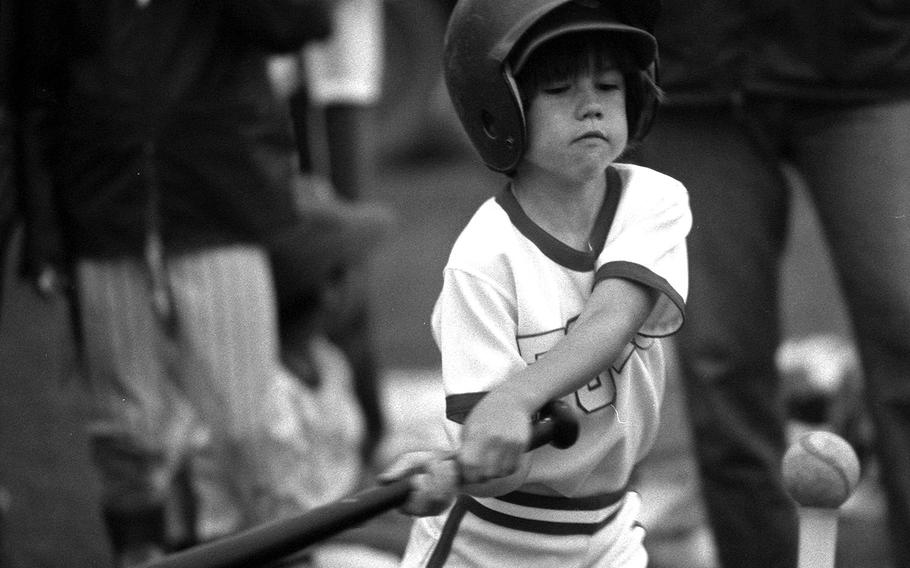 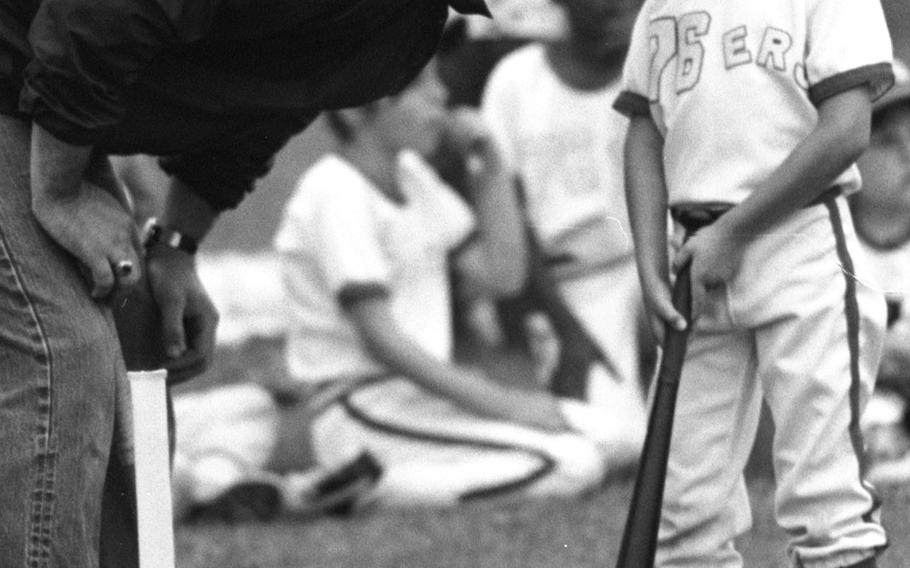 Buy Photo
Advice from a coach. (Bob Wickley/Stars and Stripes) 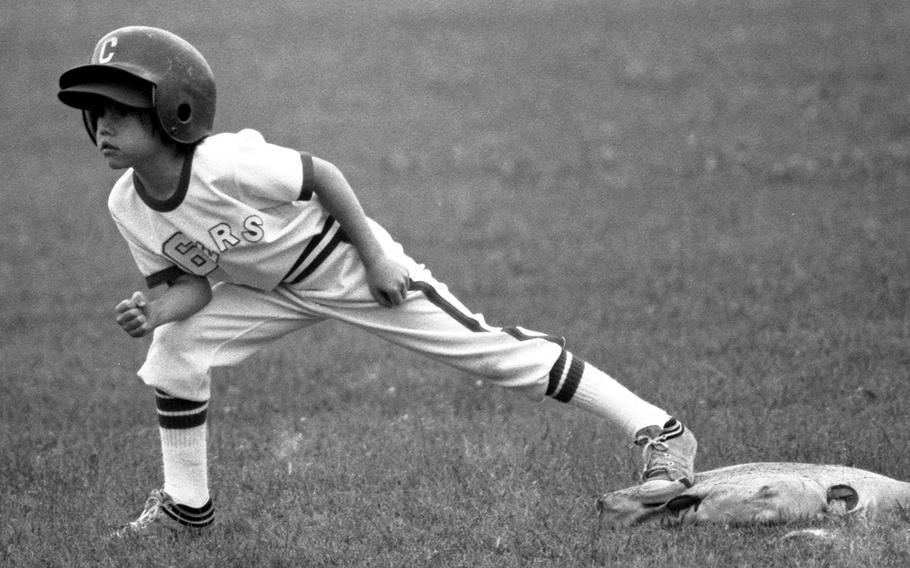 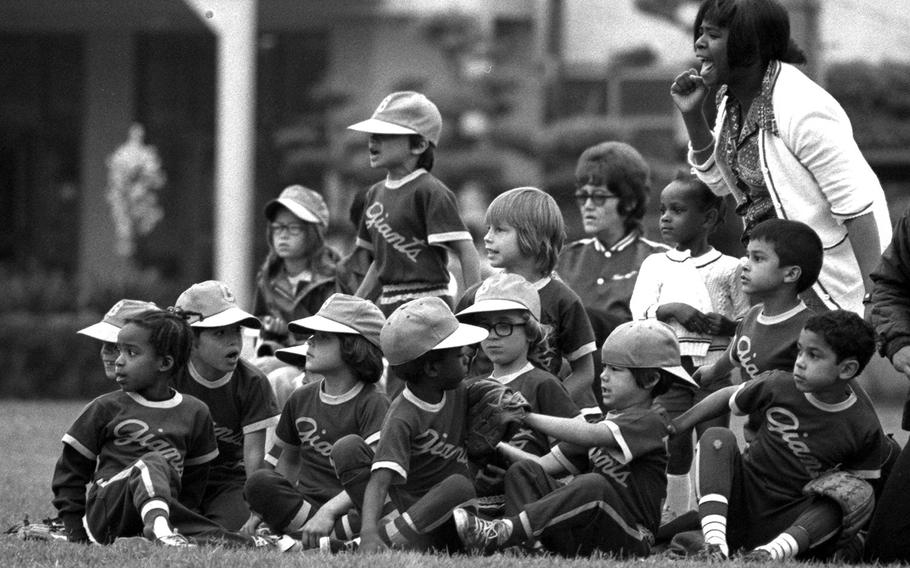 Buy Photo
Mrs. Vonnie Lacey stands above little Giants to cheer her team on from the sidelines. (Bob Wickley/Stars and Stripes) 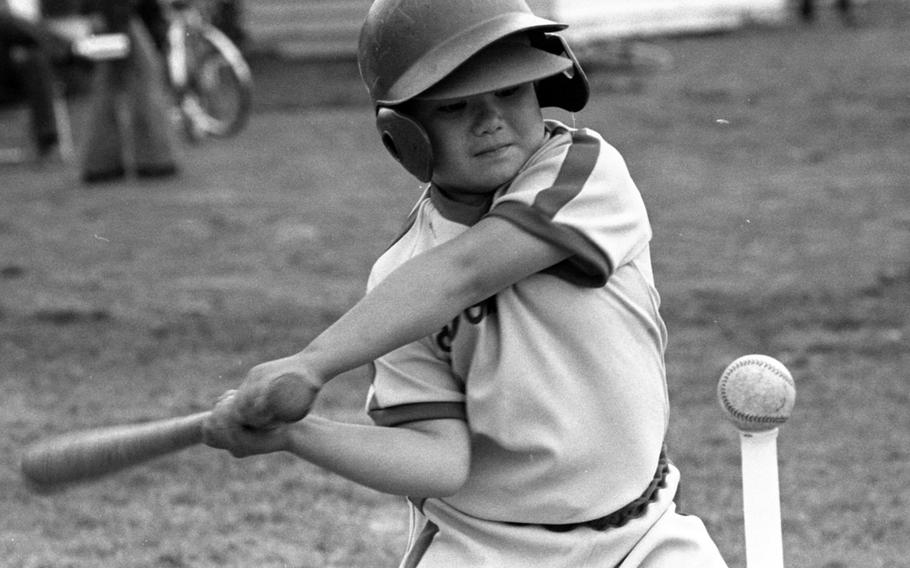 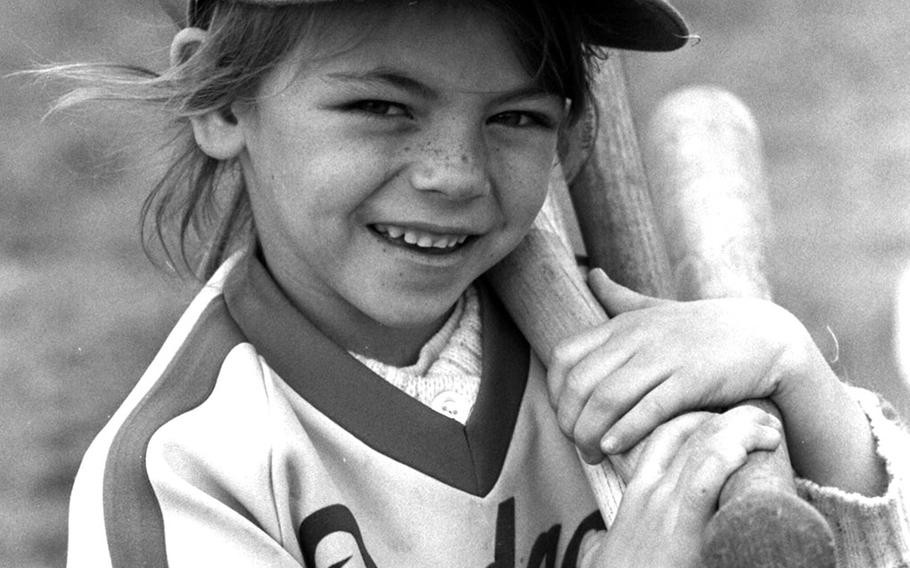 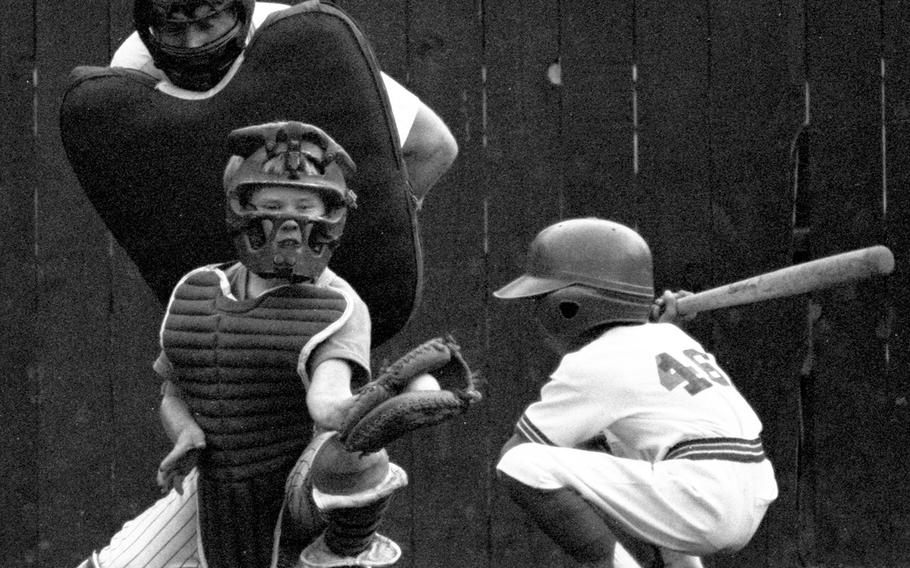 Moms and dads are busy coaching, chauffeuring and cheering on the junior sluggers.

For many people, little folks' ball is a series of cars criss-crossing the bases every afternoon with up to a half-dozen yellow, red or green caps peeking above the windows. Many of these moms-cum-chauffeur are hauling kids to more than one game or practice, because children of different ages belong to different leagues.

About the only people more harried-looking than the moms and dads are the volunteer coaches who rush from work to the playing field, often without a chance to stop by home to change clothes or grab a snack — they have to take advantage of every moment of daylight. Their chores extend right into the weekends, since most teams play on Saturdays and the frequent weekday rainouts force them to turn out on Sundays for makeup games.

Even when their team isn't scheduled to play, many of them are called into action to umpire for their fellow coaches. They also suspect that their practices and games are used on occasion as a free baby-sitting service, but they don't complain because they know that the child is benefiting from the experience, no matter what the motive of some parents.

On most bases, the entry level for organized baseball is the Tee-Ball leagues which accept 6 and 7-year-olds. The "Tee" in Tee-Ball comes from the stand (much like a tall golf tee) which holds the ball at waist-level for the batter.

It's in the first years that the youngsters learn the game's terminology as well as the plays. Since they've heard older brothers and friends brag about home runs, they boast to their parents that each trip to the plate produced a "hard-smacked home run." They are also fed so many rules and regulations in the beginning that it is often confusing which one applies in any given situation.

One lad was observed recently rounding third base and rushing up to home plate — only to stop six inches short and look up at his coach for permission to cross and score the run. He wasn't sure whether touching the plate was safe, or an automatic out. The anxious coach, watching the ball being relayed across the diamond, hurriedly gave his permission.

Not all situations on the playing field are covered in the rules and bylaws of the game. It is left to the umpires' discretion to call time-out on occasions when a player just can't wait until the inning is up to answer nature's call. This usually happens once each game, and the ump just throws his hands into the air and shouts "everybody go" while the coach looks embarrassed and the spectators giggle.

Quick reaction by the fielders has also produced some dazzling plays — such as the afternoon when a shortstop was letting his mind wander until a line-drive came rocketing straight at his head. He threw up his gloved hand in self-defense and the ball smacked right into the pocket. It took the young fielder a few seconds to recover from the fright and realize that the ball was still in his glove and that he had just become an instant hero to his teammates for stopping the play. The crowd on both sides of the field roared their approval.

Girls are still the nemesis of many young boys — and this extends to baseball. The women's lib movement has produced the coed outfield and more than one lad has bemoaned the transition as he watched his long-hit fly drop into a glove painted with daisies, or stared in disbelief as a set of wind-whipped pigtails out-hustled him around the bases. Most of the lads lose their disdain for the fem sluggers since their moms usually bring along the best after-game refreshments, anyway.

Youth baseball is an all-too-short summer for the vacationing students, but few parents will relax when the season is over — that's when football practice starts.